As you all know, last chapter Leroy died in a firey painful death… that didn’t have to happen.

Leroy was an inventor, and even though I knew the risks of working with stuff that could blow up in his face, I didn’t really know how to prevent it or keep him from burning into a pile of ash and debris.  I just figured that if his invention level was high enough, I could get lucky and he wouldn’t die in a flaming death of fire.

Only later was I told how easy it could have been to prevent Leroy from burning to death, and the answer was right in front of me at the time of the accident and I was staring right at it the whole time.

Now that I think about that, it would have been so fucking obvious.

I now declare myself the worst sims 3 legacy player in the history of history!

Anyway, enough kicking myself.  Time to move on, raise the second generation.

It’s not like Leroy was making money for the family.  What little money they had came from Amy’s “Stylist career”.  And by career, I mean, she stalks people around town until she catches them, does what they asked, then get insulted because it’s not “right” or some crap.

“No stupid, you called me this morning asking fur my expuh’tese.” 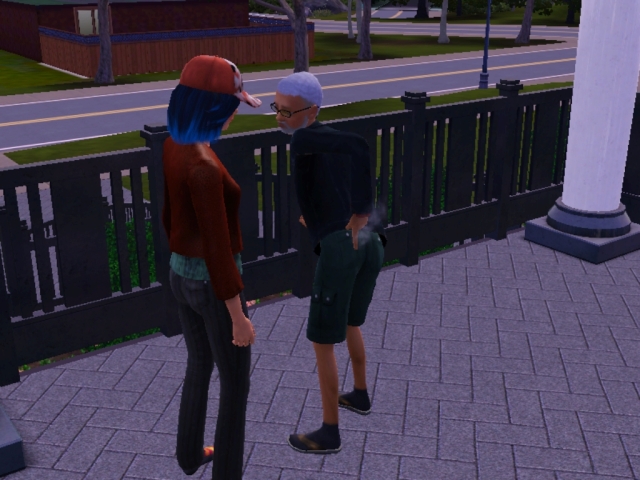 I admit though, Amy is getting better at her job.  That or the game is finally realizing that she’s really doing something for these people and counting it.

“All you wanted me to do is grow you a beard.  Trust me, it doesn’t make you a catch.” 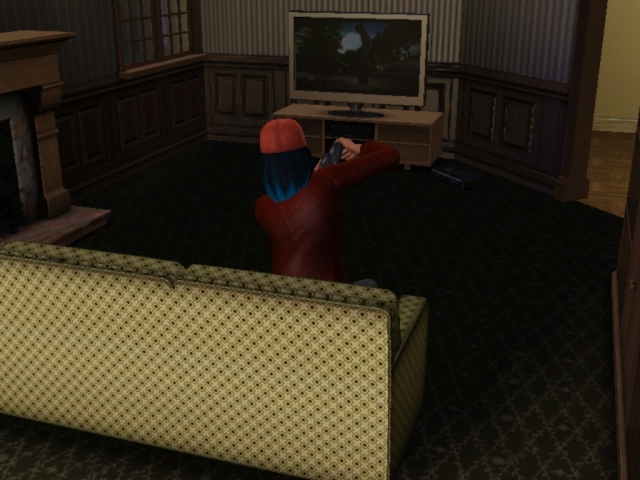 You know, when she’s actually working.

“Ma!  I just had another bad dream about daddy!”

Ok guys, I get it, my fault, stop telling me that.

I guess I should mention the family’s youngest, Buck.  Don’t really care about him, he’s so boring.  I tried getting him to work and make us money for the family, but apparently everyone in town thinks he’s boring too, because they won’t go near him.

“No one is buying mah muffins.”

That’s because they suck.

“Don’t worry Buck, it’s not your fault.  It’s… it’s ’cause your father is dead and you have to suffer bein’ a fatherless boy.  Oh, my poor son, he has no male role model!”

“Oh Sinbad!  My husband died in an accident!” 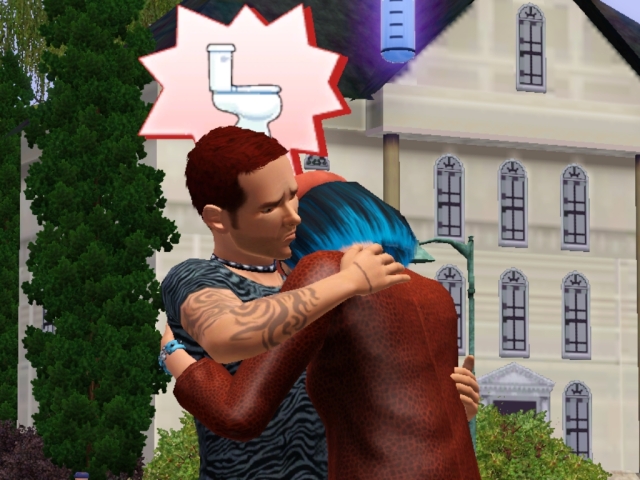 “I’m so sorry Amy!  Come here to your friend Sinbad, let me hug you and make it all better.”

“It was TERRIBLE Sinbad!  There was an explosion!  There was fire! The fire department is shit!  And I have to pee so bad!!”

“It’s ok, you got your dear old friend Sinbad here for you.”

“Well shit girl!  I don’t want to see you piss yourself!” 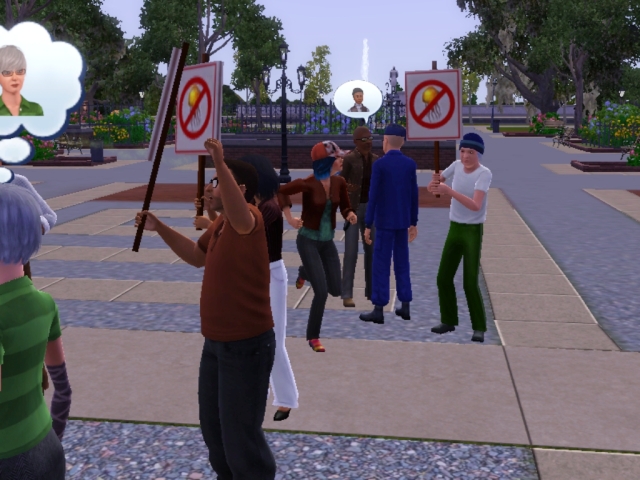 “What’s going on on this side of town?”

“We are having a rally!  The government dumped jellyfish in our river!  But they aren’t just any ole jellyfish, no ma’am!  They mind readin’ jellyfish, and they are designed to inform the government about our private lives and we gonna turn comm’nist!”

“Me too babe!  Get them jellyfish out of our town!”

Aw, aren’t they cute?  They are doing stuff together.

“Don’t listen to Colonel Bring-Down, man!  They’ve brainwashed him and sent him to do the gov’ment’s biddin’!  Down with jellyfish, up with rallies!  He’s a tool of the maaaaan!!”

Back at the house, everything is going downhill.  This is the bathroom alone.

“Um, no, you are being inappropriate, can you please leave?”

“What the fuck lady.”

On Saturday, which I had to make official ‘Clean the House day’, the family got a guest.

Aww, Amy has a friend!  Isn’t Sinbad, um, sweet?  Isn’t that against his nature? 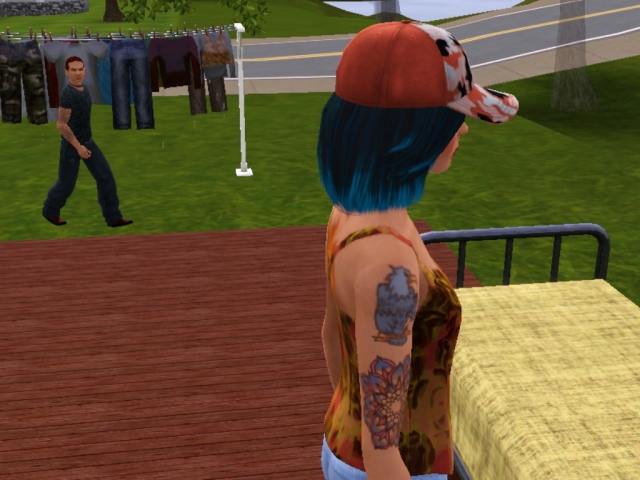 “Hey bitch!  I stood in front of your mailbox for two minutes!  Where the hell were you and why didn’t you answer the door?!”

“I sorry babe.  I guess it sucks to be poor, I can kinda figure.  Then again, Goodwin pays for everything, I just keep all my cash under my mattress in case I have to pay for my own bail.  Or child support to that stripper’s kid or somethin’.  I’dun know why.”

“Well, I was thinkin’.  Do you think that maybe… you could end what you were having with Lucy and maybe we could start our own little somethin’ somethin’?”

“You bet babe!  What I had with Lucy is over now!  Have you even seen her lately?  She really let herself go anyway.” 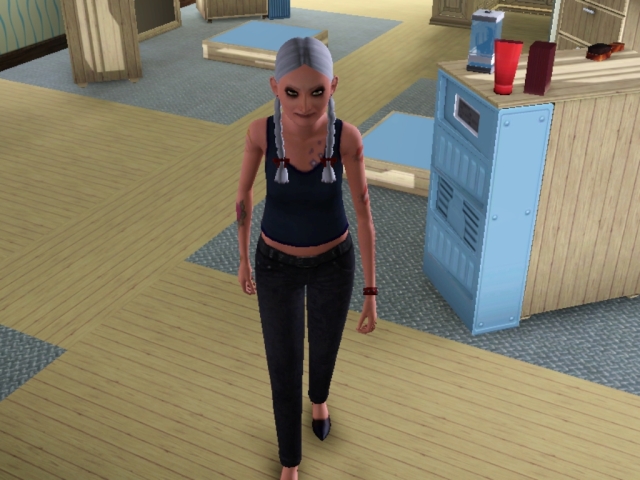 “I’m old now and I’ll castrate you with my menopause now where’s my boytoy?!”

I may have made some jokes about Amy and Sinbad being together but I never intended for it to ACTUALLY happen.

“Shut up and kiss me already.”

I know I’m focusing so much attention on Amy, but trust me, the kids are so boring.  All Luanne does is homework, eat and sleep. She’s too miserable to skill, and she’s never having fun.  I guess I can’t blame her.  Nothing has changed in the house since she was born.

That’s how poor they are. 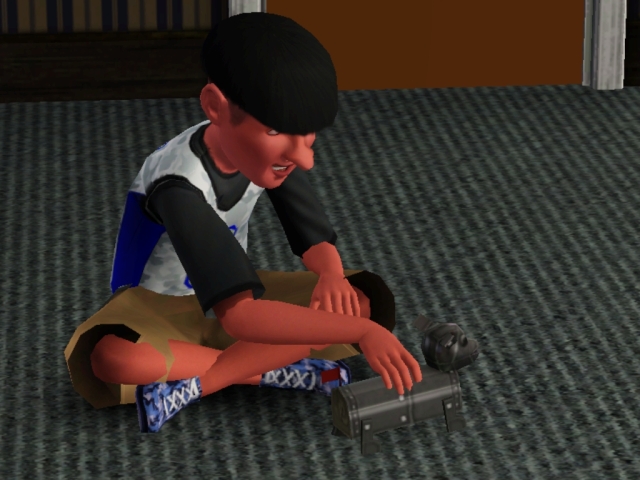 I gave up on trying to sell Buck’s stupid pastries.  Twinbrook residents would rather spend their money on hookers than help a poor child raise funds for a bed room.

He spends all his time eating, sleeping, and complaining about fun.  He never does homework because he’s always too grouchy and he’s back to sitting around the house playing with toys all day long.

“I have an excuse!  This was made by my dear paw before he died!  I would be unpatree’otic if I don’t play with it.”

That’s not an excuse!  Do something with your LIFE!  I don’t care how young you are, it COUNTS in this game! 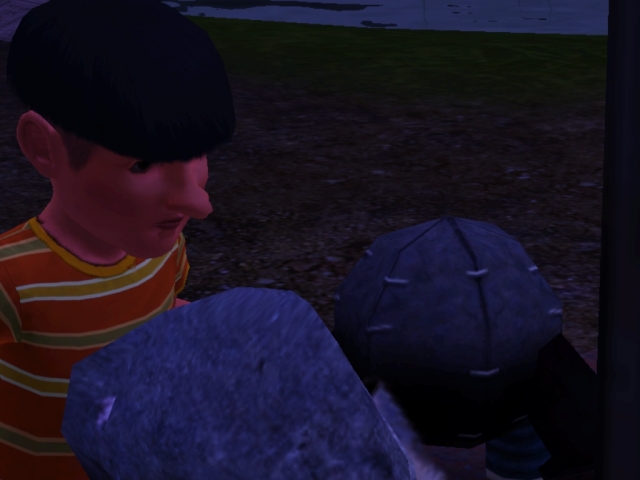 “Fine.  I’m going to see what my paw was doing before he exploded in a gassy ball of fire.”

Who knows, it blew up with him.

“Huh, I think that this here looks like a boob!”

No need to be a perv, kid.  You are only seven.

“I plan on completing my late paw’s last work!”

That’s good and noble of you and all, but don’t you think it’s a smart idea to, you know, put on pants when you are messing with dangerous stuff like that?

What’s sad is, that’s a quote.

“Oh Sinbad, your back is so tense!  You must work so hard!”

“Well, you know babe, it takes a lot of effort to get away from the cops every night.”

“Oh great.  She’s already gone from one loser to this one.  We must complete a new semi circle on their porch and complete the curse!”

Don’t you have a bus stop to sleep under somewhere?

A YOUNG WOMAN WITH SO MUCH HOPE FOR HER FUTURE

Tonight after another segment on “Who Beat Their Wife Tonight?!”

ONLY ON YOUR LOCAL REDNECK REPORT: NEWS FUR THE PEOPLE 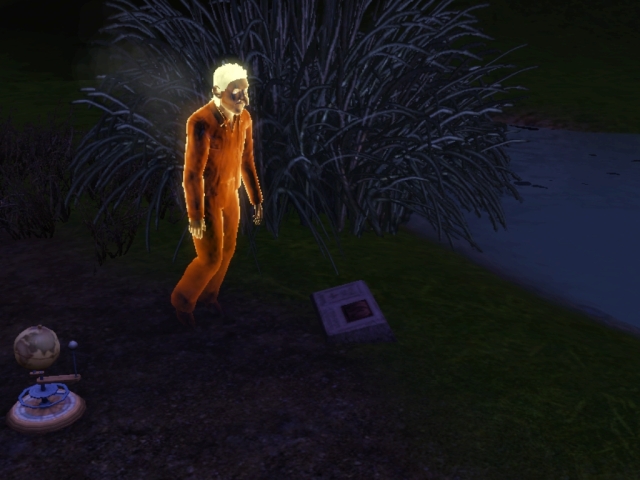 Oh hi Leroy!  Haven’t seen you since you died!  It’s been…. ok, I don’t remember how long.

“Oh jeez, thanks, you bitch.  I’m just your founder, just the person that started this shitty legacy for you.”

Yes yes, I know, nice to see you too.  But you know, accidents happen.

Of course Leroy has to rub it in by going to the shower first.

OK, I GET IT, I’VE LEARNED MY LESSON. 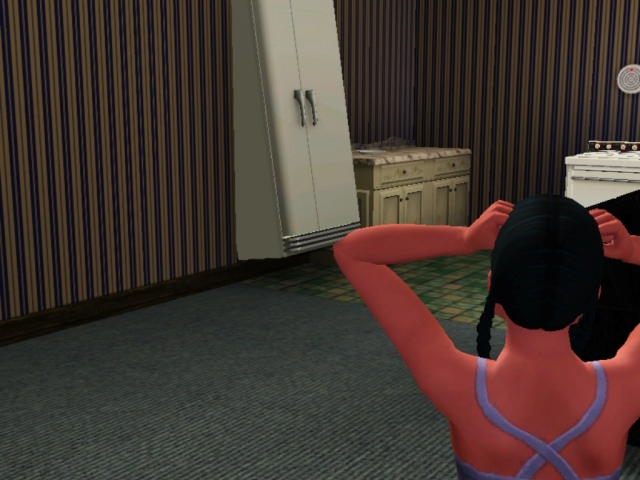 I know I have been a bad sim player, but really Leroy?  You have to punish me by snapping the crappy fridge in half and dragging it through the wall?  The house is shitty as it is, stop making it worse. 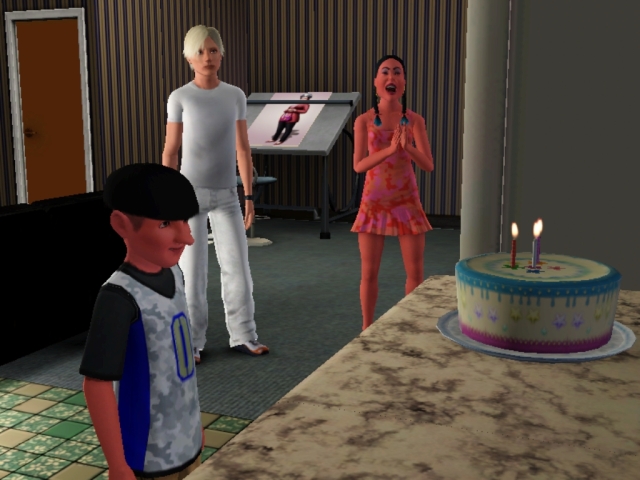 “I’M ALL ANEREXIC AND SHIT”

Buck grew up taking everything from Leroy, and looks exactly.  Like.  Him.

For Buck’s birthday, he got his own bed (because he can’t keep sleeping with his mother.  It’s wrong now.)

Sadly, There is still no money for his own room, and with his sister still sleeping on the porch, it’s pretty much back to lawn living for these guys.  Buck’s bed is set behind the clothes line in the front yard.

All it is is camping.  He’s not complaining.

Ten internets if you know what line that is from.  Hint:  So is the title of this crappy chapter.

“Uh, no Amy, I’m not ready for that kind of commitment.”

“Oh.  Do you want to spend the night over instead?”

Amy finally get’s her first woohoo since Buck was born, underneath the satanic painting of her dead husband.

“But, all I wanted was a new hairdo…”

“Oh Sinbad!  I’m going to get old without you here with me!  Marry me, and bring your money to live with us and this trailer, and I promise the kids won’t be around as much as they seem to be!”

“Yes, we finally have cash for once I MEAN I’ve found happiness again!”

“Hey babe, this ring needs to be resized I think.  It’s a bit too big for my hand.”

“That’s because it’s my late husband’s ring.  You think I could afford your own ring?  You stupid.”

I don’t know, Leroy.  That might just be the drafting table embedded in your chest.

“I hate yoooou Amy!  I can’t believe that just because I’m dead, you can move on and find happiness!  You were MAH wife!”

Oh, what?  A woman can’t get remarried after her first husband dies?  She can’t find happiness?  Are we still living in the Victorian ages? You suck Leroy.

“No.  I keep hearing this voice telling me to get off the porch.  I keep ignoring it though.  I have to do my homework anyway.” 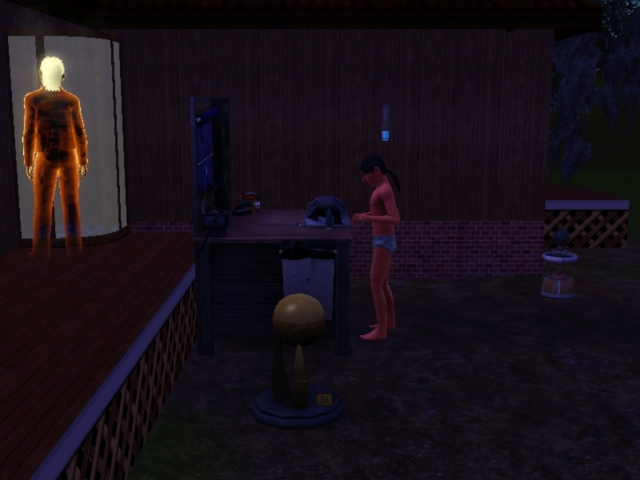 “Please children!  Your paw wants to wash off the shame of having a cheatin’ wife in the shower.  I’m so heartbroken right now!”

So that’s it for this chapter really.  I know it seems that Amy may be moving on really fast, but my computer is painfully slow with this.  Trust me, it evens out.

“How ’bout we celebrate you movin’ in with a little woohooin’, if you know what I mean?”

“Um… I don’t remember you being that flat.”

So yeah, until next chapter.

Oh, and one last thing:

“Haha, your boobs are saggin’.  You are totally old.”

I make sims legacies and update them once every other blood moon :)
View all posts by missmiserie →
This entry was posted in Generation 1. Bookmark the permalink.

15 Responses to A New Paterfamilias?