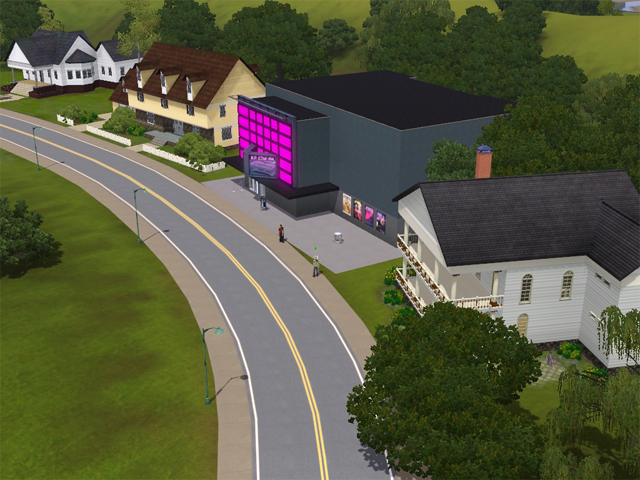 Whoever is in charge of the town’s layout planning and housing system isn’t really all that bright.  I sent Tater and Ken out on a little outing to themselves, a sort of unofficial date, to a place they were having a SimFest, and found they plopped a night club down in the center of a quiet suburban neighborhood.

Good job, City Hall.  I’m sure the neighbors love this. 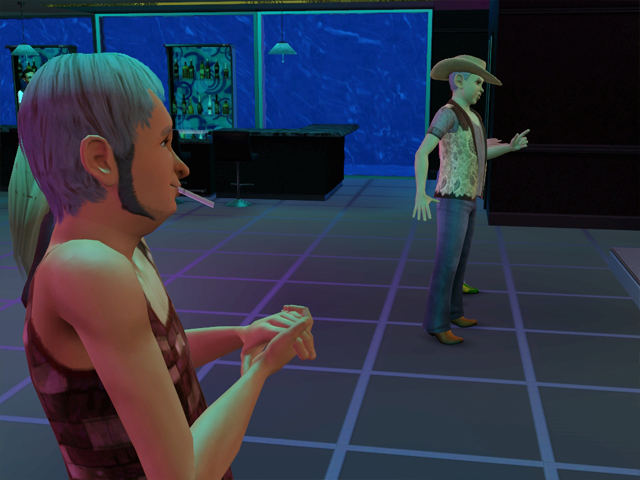 “Ain’t this a lovely show, Ken.  So much talent, so many youngin’s wid’ so much potential…” 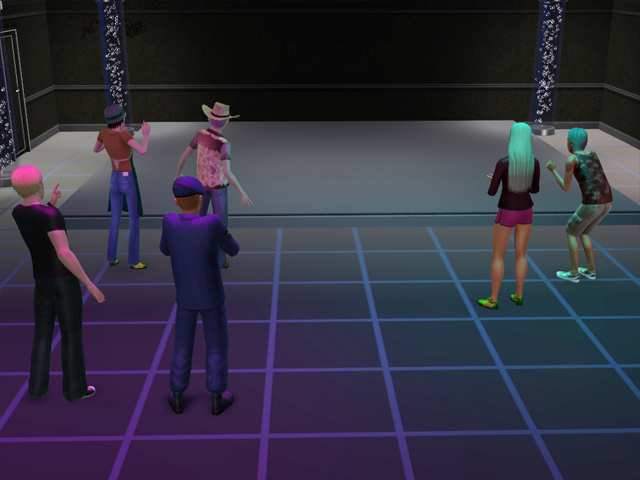 This is the slowest SimFest I have seen. Of course these idiots are still getting something out of it. 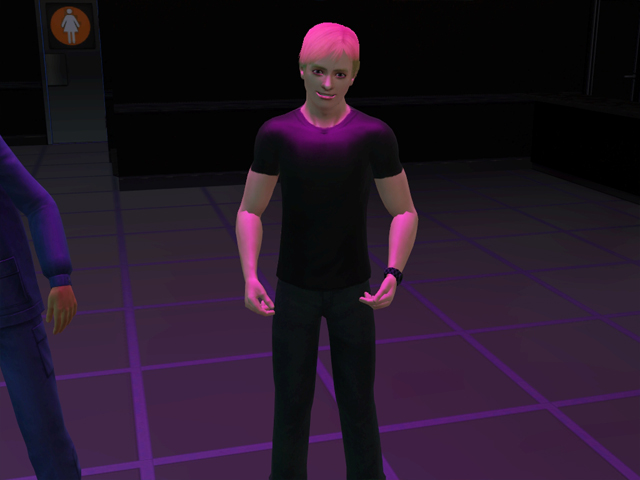 While this… nothingness… was going on, Geobe suddenly started going up in the acrobatic career.

He had gotten the job suddenly, and then started going up, level two, level three, all the way up to about six I think.

“I’m about to get up on stage and SHINE!” 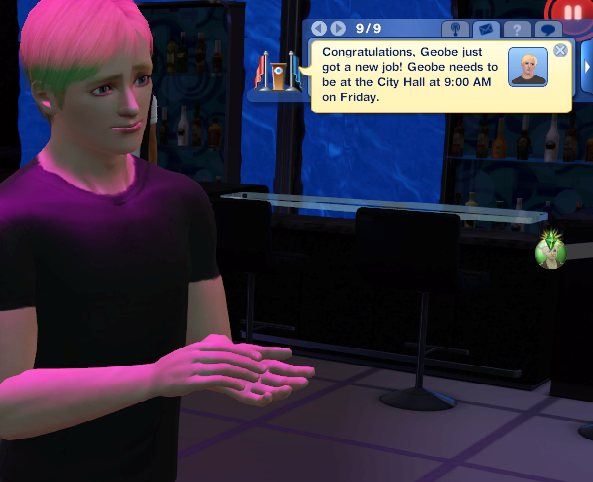 And then, suddenly, right before I thought he was going to swoop in and save the show, he switched and got a job in politics.  Smooth move Geobe. 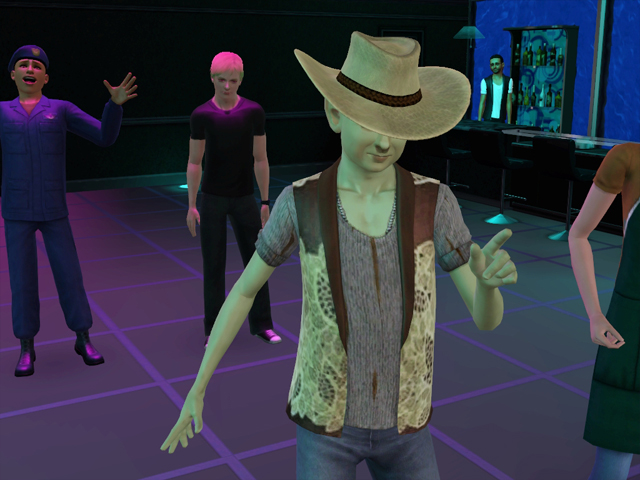 “Dammit, Geobe, you get your butt up on that stage and actually give us something to watch!  Don’t get our hopes up and then sike us out like that!  What’s wrong with you, boy?!”

“Don’t tell me what to do, Ken.  I may be a Yes-Man now, but I still say no to those stupid revealing tights!”

“Well that about does it for our show tonight.  The winner is some random other guy I don’t even think got up on this stage.  Oh well.  Did you enjoy the show tonight?!”

“You didn’t even let my husband on stage tonight!  You really think I enjoyed the show because of that?!”

“Lady, it isn’t my problem that he suddenly wants to be the most flexible representative in Congress.”

I sent Tater and Ken somewhere else in an effort to actually give them a fun outing (well fun for me, that show was awesome to them I suppose…)

“Tater, you really got to stop powersliding into a parking spot on the street.”

Now, it’s time for Eagle’s birthday.  For some reason, Dolly wants to do it.

“I have never held a child longer than 2 minutes.  When is this over again?”

“Why, I’m a pretty decent mix of my parents!”

I know, you just rub me the wrong way, kid. 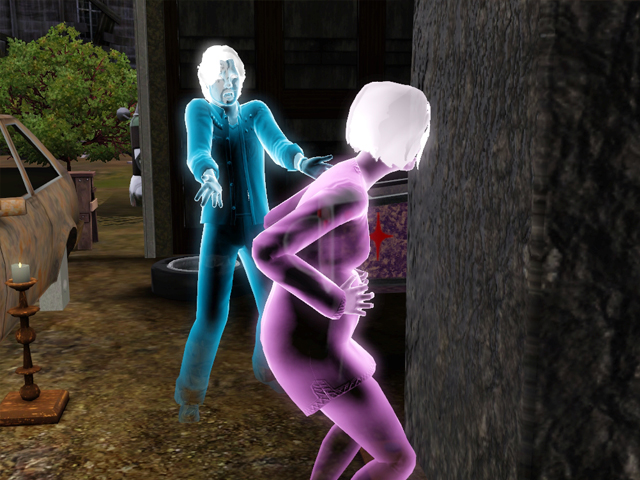 Also the parents themselves didn’t care for very long, because baby number 2 was on the way!

“I don’t think you were even THIS upset when I died, Bear…”

“Sorry Ken, he’s really antsy for this baby apparently.  So much so that he left his pregnant wife stuck in a pile of garbage.  Sigh.”

During the labor, my OTP became offical 😀

They were enemies as children and now they are lovers.  AWWW! 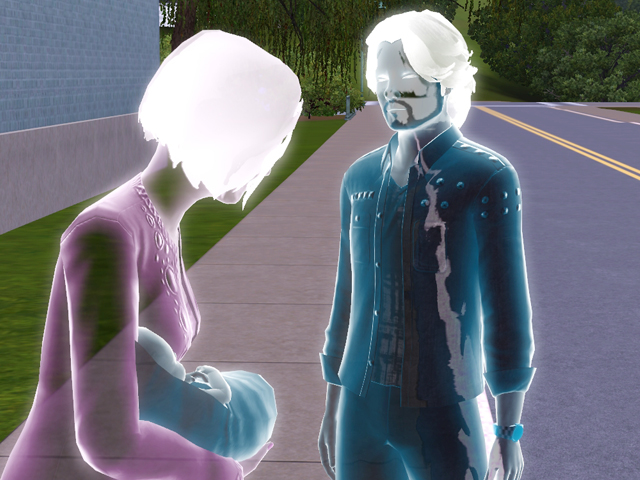 Oh yeah, back to the baby.

“This child disappoints me.”

“What are you talking about, Bear?”

“She’s just not as patriotic as our little Eagle.”

“What are you saying, I think Egret is plenty patriotic for you!” 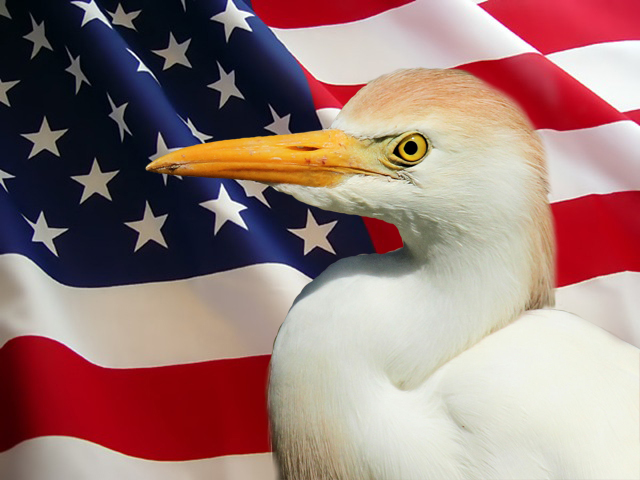 “I don’t know, Opal. I’m just not feeling the Americanism with this bird though…”

“What, can’t a man go to the bathroom with some privacy here?”

“It’s not the bathroom.”

“HUUGHHN, it’s only a matter of time now!”

I think the kitchen has become the family’s cesspool or something. 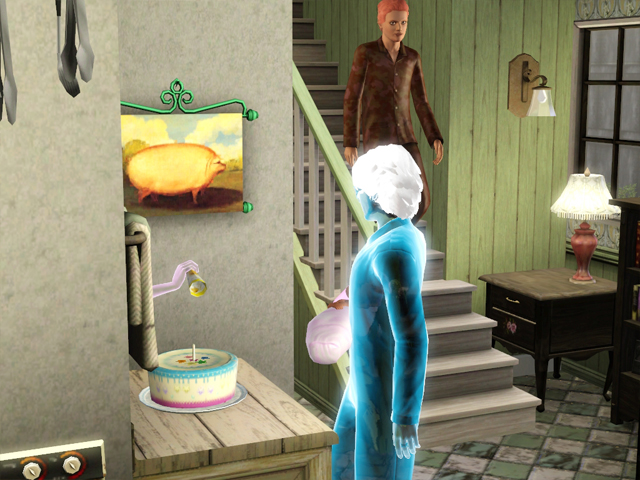 And now it’s Fancy’s turn to let me down – I MEAN grow up. 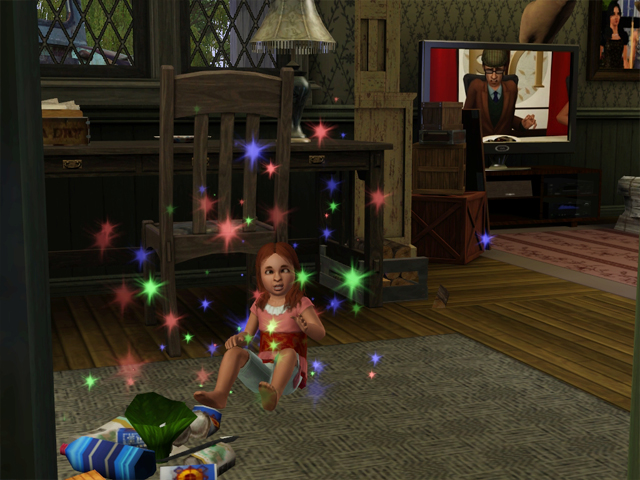 “Ok sweetie, it’s time I taught you how to talk… I just sat in some old trash, didn’t I?” 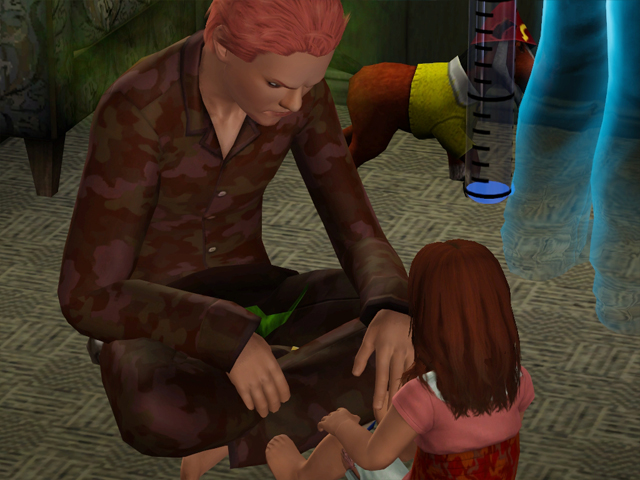 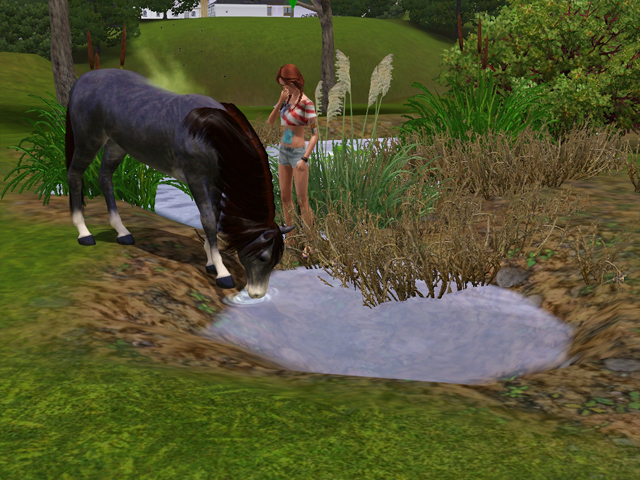 I will now interrupt absolutely nothing to show Dolly trapped by Bella between the two yard ponds.

“Ur smell has gawt me stuck in the mud, horse!”

Then Hannah got ready to drop Phoenix’s baby.  There isn’t one Twinbrook pop up involving babies with townies and simselves that isn’t funny to me.

“Yep!  A random sculpture of a chair, just for you!”

“… You are much taller than you sounded over the phone, lady.” 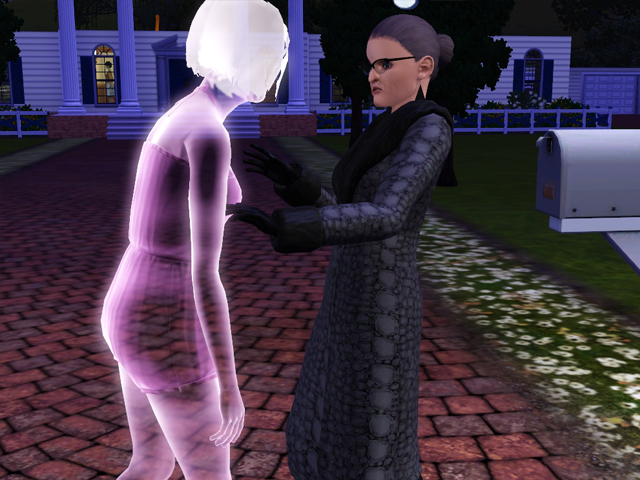 “Technically, no.  They are made out of ectoplasm, a side effect of, you know, being dead.”

Ahem… moving along then.

Back at the house, Dolly was still unnaturally being a mother, when all of a sudden:

“GAH, who da hell’s ringin’ the doorbell at ELEVEN AT NIGHT?!” 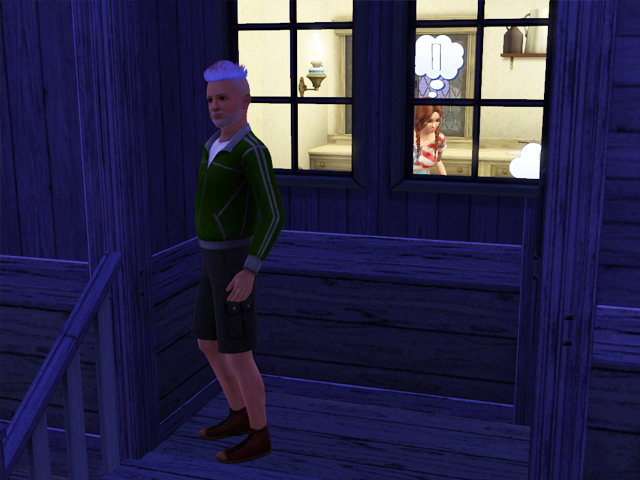 Um… Tal?  No one invited you here, especially not this late in the evening.

“I just haven’t seen you guys in forever!”

There’s a reason for that…

“I like to see my family from time to time!”

What the hell, Tal?!

“Please, humor a poor old man, I’m tired… my wife left me for our son… and it takes me a long time to stand on your porch jimmying the lock to get in, I just need a short nap.” 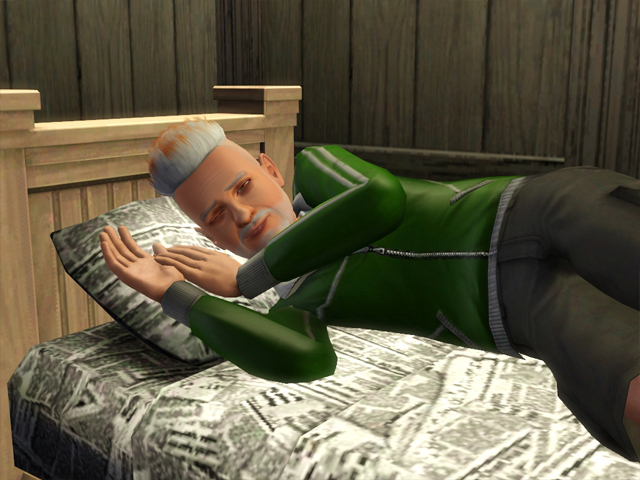 “…I can still see you there.  I can’t sleep with you watching me.”

YOU WEREN’T INVITED IN, TAL.

After his short nap, he got up around 3am, and went home.  But as much as he was a nuisance, this is the last time I saw Tal in person.  He died eventually.  He left his ex wife and son with nothing.

“I know your cesarean scar is so deep that I can see the pillow on the other side of your torso, dear, but let’s try for at least one more baby.  In case Fancy lets us down.”

“That joke was already done dear.”

“Doesn’t get me any booty any less, Dolly.”

Poor Bear and Opal were stuck doing the rest of the skilling of their kids in the meanwhile.

“That’s not the first time that’s happened though, right?”

“Huh, the fire alarm is going off.  I wonder what that means…”

“Good thing Unca’ Bear was here to save ur already dead ass, Opal.”

“You know, I really expected him to actually lay on the fire and put it out with his body.  I guess I’m wrong though…”

Maybe this will teach them to stop being so late to fires.  Maybe not.

And better yet, they are all in the correct cribs!  That… never happens. 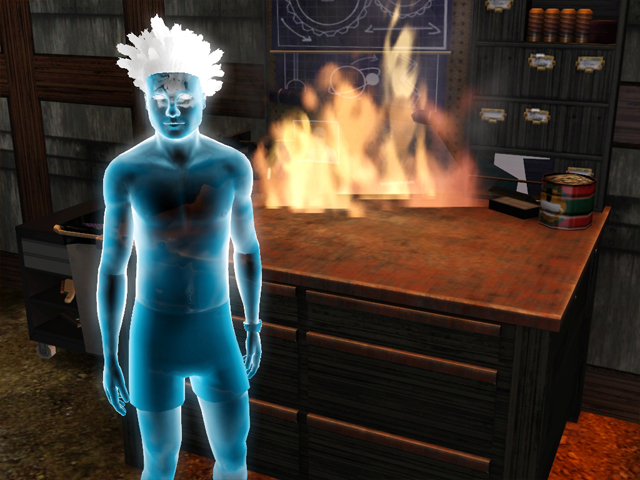 “Don’t really care at the moment.” 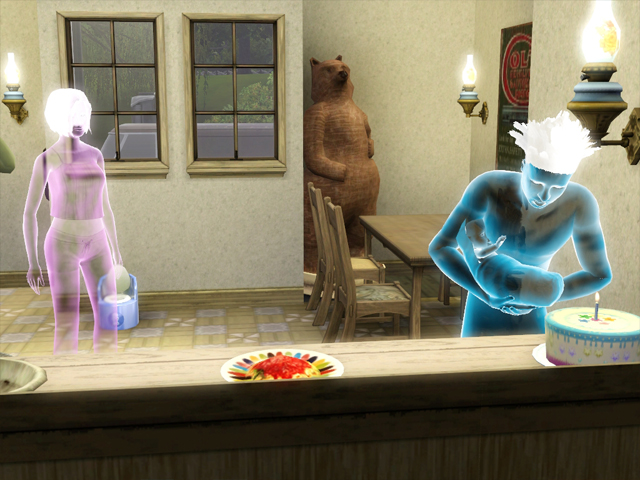 “…Do you smell something burning?” 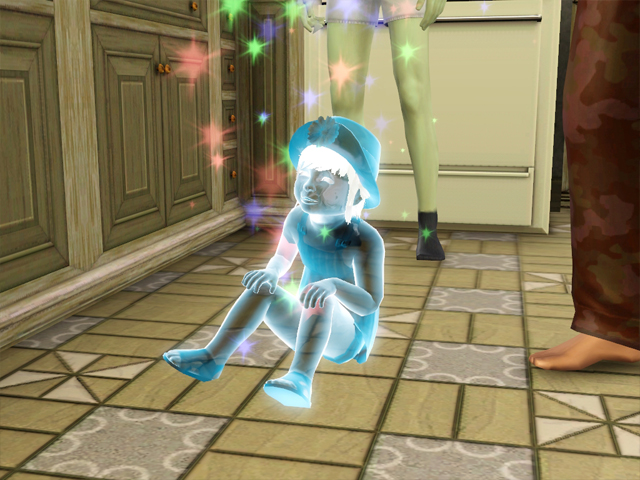 She is actually quite cute!  I think I suddenly prefer her over Eagle! 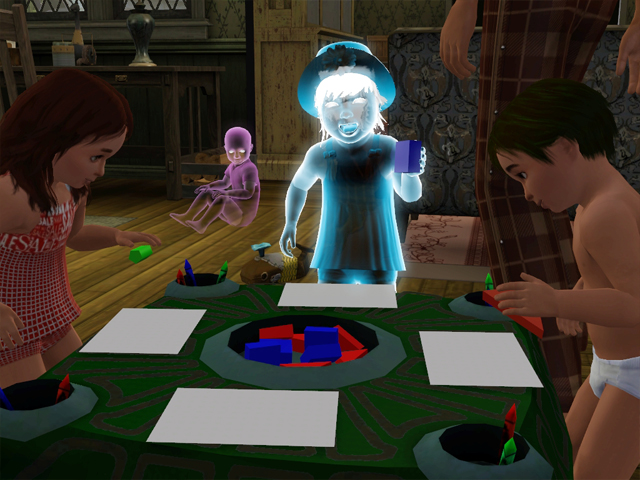 That’s your fault, Eagle.  You keep saying you can’t sit at the table, but that’s what you get for trying to take the spot Egret’s already at. 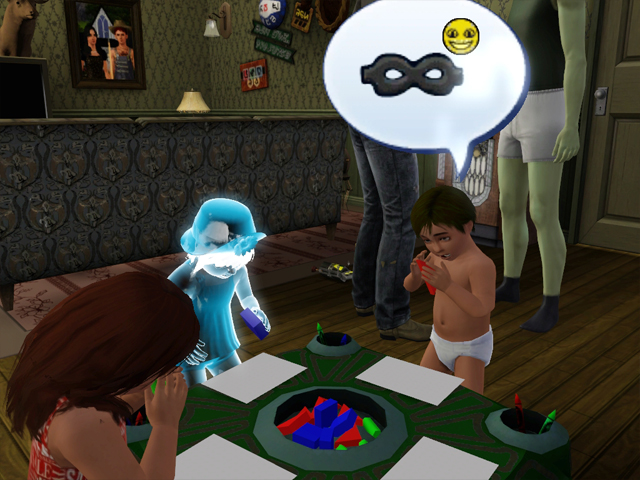 “I think we would be an unstoppable force if we banded together, friends.  We already hold the hearts of anyone who thinks we are cute, so here’s my proposition.  We go into crime together.  With our brains and looks, we will be a force to be reckoned with!” 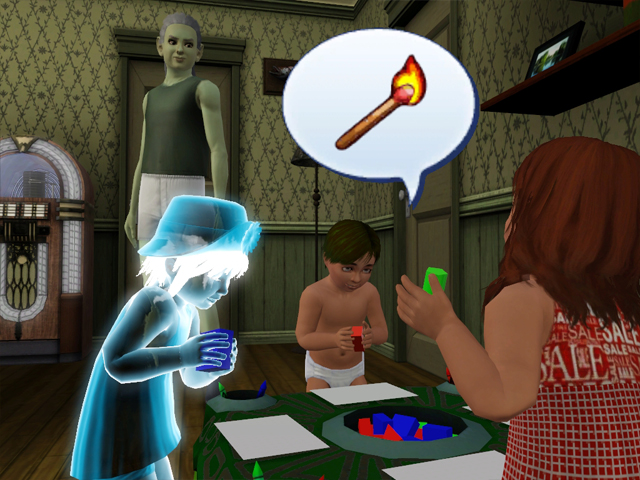 “And as my first plot against humanity as your self proclaimed leader, I demand we burn something!  Just to inform the masses that you don’t fuck with us!”

“Fancy, maybe we should let Egret do the burning.  You scare me too much.”

“What are you babies talking about over here?!  I will not have my grandchildren dealing in criminal activities!  I will have to put my foot down on this idea, Beau.”

“I’m sowwie, grammpa!  Ok, ok, no fire!  We will do something lighter, like bootleg DVDs!” 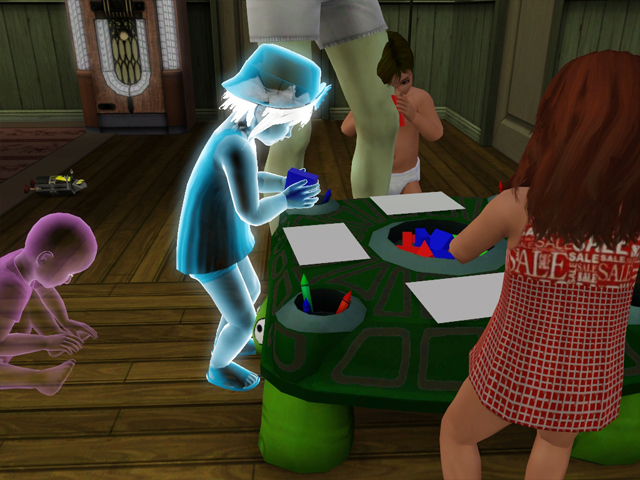 “NO, Eagle, you aren’t taking my spot at the table!”

“But… the other side of the table is too far away…”

“Stop being such a loser, Eagle.”

Wrapping this chapter up with the usual.  Sugar’s sugar daddy died and left her with the kid, so Sugar went to the dark side D: I’m not sure how to feel about that.

And Elissa’s baby was born with some extra fingers!  Congrats Elissa… I guess.

I make sims legacies and update them once every other blood moon :)
View all posts by missmiserie →
This entry was posted in Generation 9. Bookmark the permalink.