The Towns of Appaloosa

Posted on November 9, 2011 by missmiserie

Alright, now that I’ve gotten a feel for Pets out of the way, let’s actually do something with the Seckies.

But before that, let’s backtrack a little bit, before the whole Appaloosa and Bloaty, and go back to Sunset, where it all started after Pets was installed.

“Oh hey, Tater.  I didn’t think you were going to come over so soon, I didn’t even get to take a shower yet!  I just got done crawling out of the sewage tank because Pilot made me check for butt-grabbing latino skeletons…  Hey, you look a little sad.  Is the death of your sister actually getting to you, Tater?” 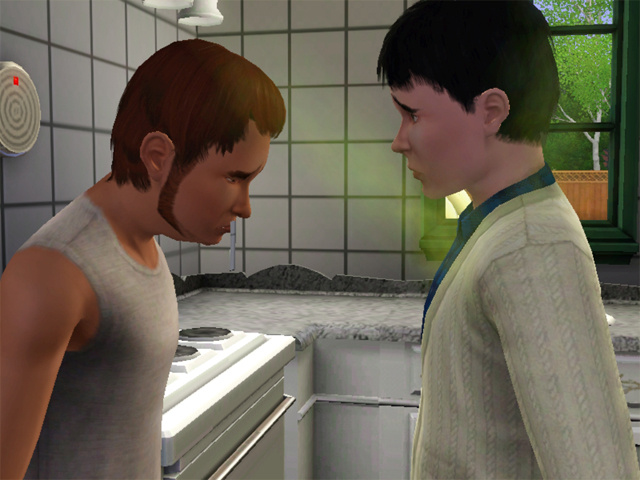 “No, but it gawt to my papa.  He doesn’t wanna live in a hawse any more wid’ the glitches that killed mah sistur… Luther, papa’s makin’ us move to a new town!”

“Yeah… several states away too, ‘n papa says we ain’t ever comin’ back to this place… I don’t think I’m ever gonna see you again Luther!  Wut am I gonna do wid’out yew?!”

“What I want you to do is to remember me fondly, Tater.”

“Well, we had a good run, didn’t we?  But you are getting out of this dying crap town, a town that even a working Twallan’s mod isn’t going to save, and you are going to meet new people, cool western people, pretty people…  I’m going to be stuck taking care of Pilot until he’s 150 at this rate, but you… you go have fun, ok?”

“Oh Luther!  Ur the best damn boyfrien’ I’m ever gonna have!  I don’t wanna have to leave yew like this!”

“Come on now, cheer up.  I’m positive that we are going to see each other again one day…”

And of course, the ice cream truck decided to photobomb a very serious moment… 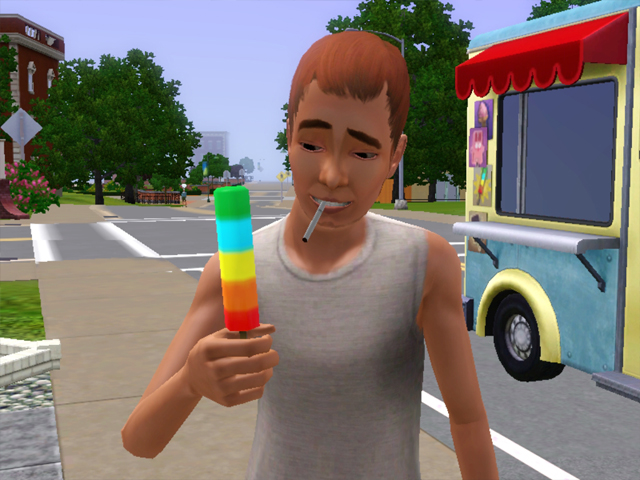 Apparently ice cream can fix depression, because Tater forgot why he was even sad five seconds later.

This is when shit started getting bad.  Everything was all hunky dory for a while, and then my computer said, “OH, you are actually having fun?!  RAGIKWGJEIWKJALSDKGFJK” and Sunset was just horrible to even try to work.

Back at the house, I had Mt. Dew a little funeral all set up and ready for guests to be invited to (I don’t even think her boyfriend Mack even noticed her dead) but after several crashes, glitches, and other anger inducing shit, I packed the important stuff into the inventories, let Pat fall into a couple of holes, packed the sims worth keeping into the sim bin (and almost didn’t even get to do that, the game wasn’t going to let them go without a fight), and moved the family to Appaloosa Plains.

Ah, the clean fresh smell of a clean slate in an unfamiliar yard at four in the morning.  Welcome home guys!

This is the part where Bloaty’s story basically takes place.  I think we are all caught up now.

“So great, a new “friend” for you to ignore me to, Bear?  And here I thought we were just starting to like each other again!”

“Along the way here, I sacrificed all the graves of everyone this family loves, ALONG with that Opal girl.  And now Bear will be mine, ALL MINE!”

Yes, all the graves went POOP because I got really tired of them glitching and lagging and “OMG A GHOST NOOO”ing my sims.  Which really is heartbreaking because now Tater isn’t the only one that lost his relationship.  I still feel better though.

Eventually the raccoon bit Nascar, and for that to be effective, he probably took off with a finger case or something. 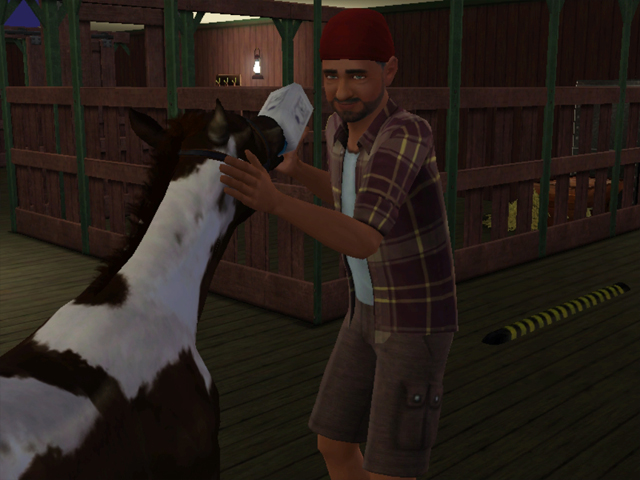 While Nascar welds on a replacement, here’s Dale doing something very ungangsta.

Being the new kid and all?  Actually, half of those guys I put in the town myself.

I haven’t actually counted, but I think Appaloosa has the smallest population of any town I’ve played.  Either that or they haven’t all come out of the woodwork yet.

Haha, Starla!  What happened to you?!  You looked just fine when I moved you from Sunset! 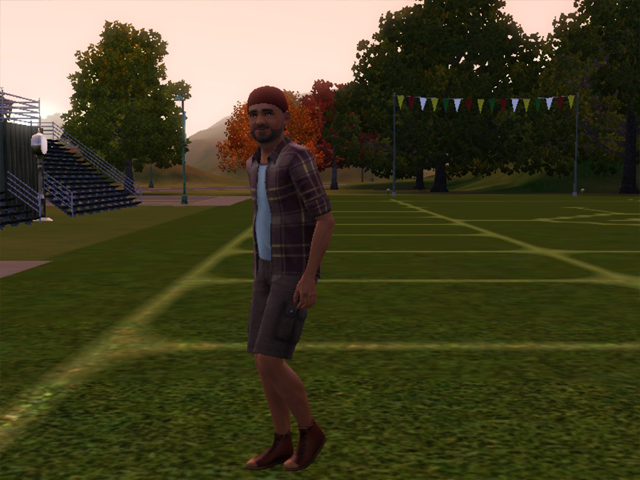 “Ah, a football field (actually I don’t think those are football markings, but if I tell Dale that, he might shit a brick loaded argument)  If mama wus alive to see this gawgous’ thing, she’d be in hog heaven.”

Ah yes, Virginia.  Still chillin’ at the Sunset bistro too by the way.  Good times.

“Who?  Well yeah, I remembur ur sister Ronda, ‘n ur brother Pat, ‘n havin’ to spawn them all by mahself.  Don’t know wut ur goin’ on ’bout a mama…” 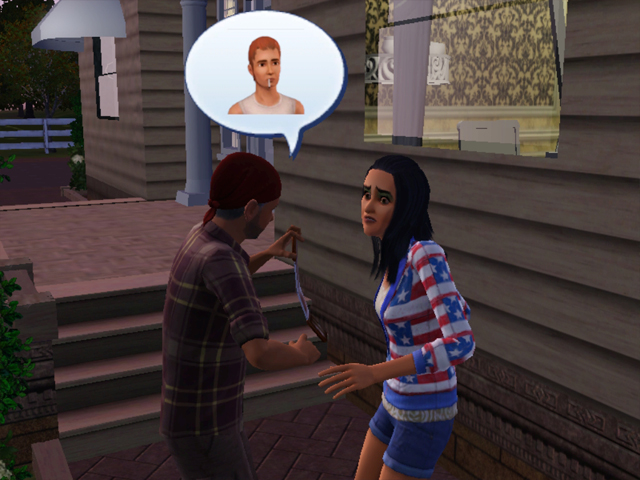 “But yew should catch up wid’ ur nephew!  That Tater boy, he’s a gud kid ya know!  Mah poor son’s only kid, really gonna be a apple of mah eye, cuz I know that Bear boy ain’t nothin’ to me…”

“Um, papa?  Wut ’bout Mt. Dew?  The other child of Pat?  The one you buried in Sunset ‘n the whole reason yew left that town in the first place?”

So the family can recognize relatives from the bin, but can’t remember the dead at all.  It’s a little sad. 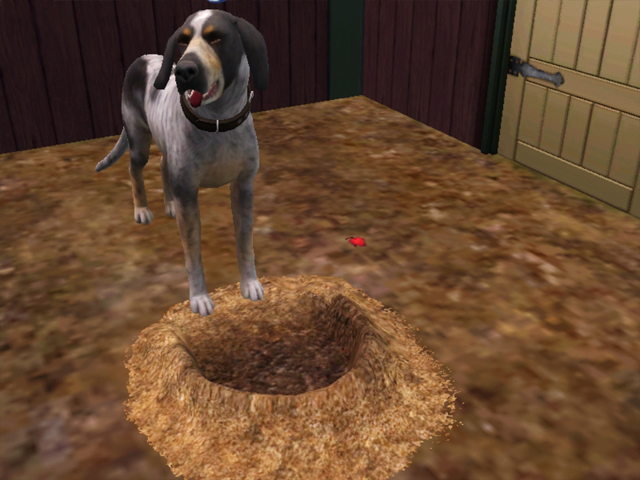 “Now there’s you a man right there, Tater!  Tall dark and handsome, and he looks like he still has all his teeth!  What do you say?!”

No, VJ.  We aren’t setting up Tater to men twice his age, no matter how sexy you find them… seeing as you and Lee have been ‘fighting on the sidewalk’ since Bloaty left the house.

“But wut ’bout that guy, the really tiny one next to ur neck!  I think he’s in mah PEES class!  He’s kinda cute!”

I’ve been trying to spend time with the pets, I really have.  But this is what Lynyard and Cletus spend all their time doing.  SLEEPING.  I got the laziest pair of animals ever.  Kinda like their owners.

“Cletus!  It’s been FOUR MINUTES since we sniffed each other!  I’m so LONELY, I’m going to call the adoption center back if you don’t come LOVE ME” 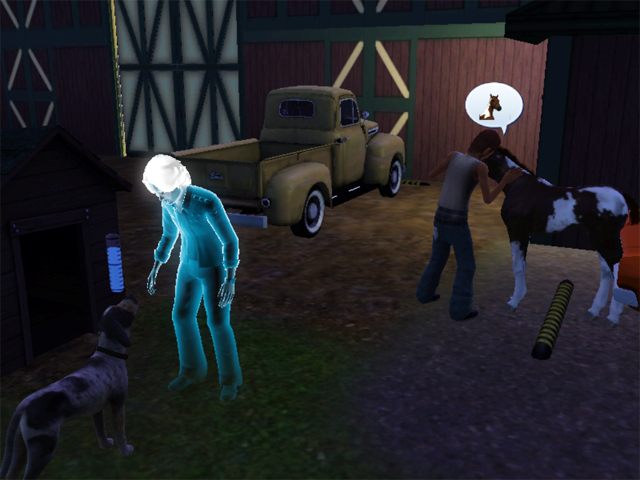 The boys interacting with the pets.  Just because I think this is such a cute moment.

And then Cletus had to ruin it by hiking up on Bear >:I

“Heh heh, ‘n it’s funneh cuz he’s all water, ‘n that means it’s only gonna take a few seconds fur my pee to travel up to his mouth…”

“So you know my brother Bear, right?  He ain’t comin’ to school today, he’s tryina’ vomit up pee.”

“Um… I didn’t even know you were brothers.  You know, with him being a ghost and you being… not ghost.  Is he your step brother or something?”

“Well, papa’s a hundred percent sure Bear’s his kin, but the thing is, mama has a thing ’bout jumpin’ on anythin’ wid a wanker.  Wut I think is wen that Shark guy was stayin’ wid us, he ‘n mama gawt together ‘n… *slaps hands together*”

“CRUZ.  You are too high class to be listening to this trash.  It’s time for you to go home and stop hanging out with this little hillbilly moonshiner.”

And so Tater never saw Cruz again because MY COMPUTER SHOWED ITS ASS AGAIN. BIG TIME.

Like, SO BIG, that none of my past fixes were working, and in a mad attempt to salvage what I can, the following happened.

New Appaloosa.  The old one was so corrupted and flunky that it was a miracle that I managed to bin you.  AGAIN.

“‘N why are we so blocky and why’s the grass all slick?”

I tried lowering the graphics to fix the problems we were dealing with.  It didn’t even work.  And I never got around to putting it back before playing.

Oh dear, I must have accidentally deleted it throwing out some bad CC.  Sorry Pat, it will be back soon, promise.

Along with the graphics levels because AUUGGHH

“Wut?  If there’s anythin’ hangin’ off my lip, I swear it ain’t any dingleberries…”

No Cletus… it’s not that… 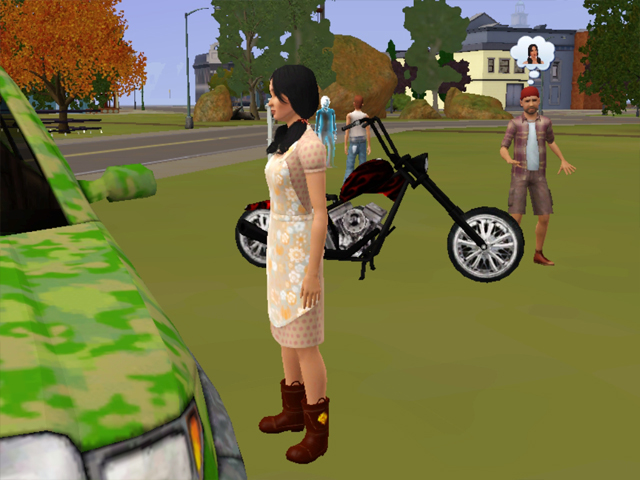 “Wait… somethin’s wrong… where’s McAssWagon?!  How yall expect me to be calm ‘n happy with full stats if I can’t sit in my McAssWagon ‘n smoke my doobies?!  PAT’S WIFE!  Please tell me you have McAssWagon shoved up in that massive blackhole of urs ‘r somethin’!”

“Um, nope.  The only think I have there is my high school diploma.”

Oops.  I guess the Motive Mobile wasn’t in someone’s inventory when we moved again.  The Charger can be replaced quicker… as for “McAssWagon”… it just sucks.

“Hey wait… this ain’t our lot frum last time… this one is smaller.”

Yes, smaller lots don’t take so long to load anyway.  Better for me!

Like you people even know what to do with a nice house!!

What are you two doing?!

While Pat was moaning around in the yard for his damn hat, Bella christened the kitchen like the idiot she is.

“I think I wus the las’ person in this hawse besides my son that even liked yew, Bella.  Na’ I don’t, gud job.” 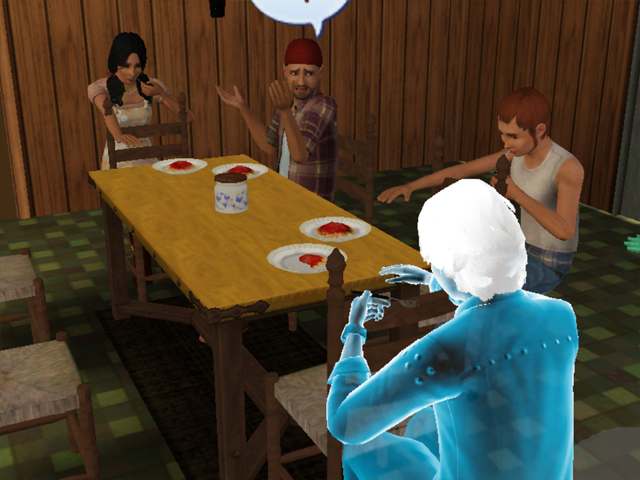 UGH, I must have missed some CC.  Sad that Pat’s hat was deleted for this. 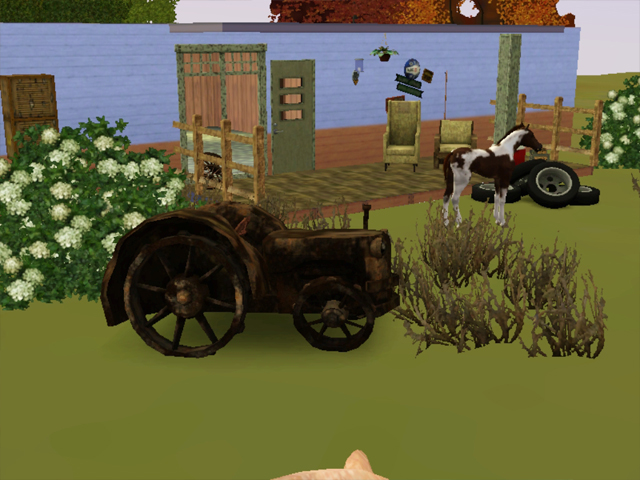 OH, I forgot to show off the new Secksie house, didn’t I?  Ok, here we are, BAM, we are back living in a trailer.  It looks much better when it doesn’t look like it will slide around on the blocky ground, I promise.

“Where am I supposed to sleep now?!  I had a warm cozy barn to sleep in the last game!  Where do you expect me to stay at night?!”

Lynyard, for all I care, you can sleep on the couch.  Matter of fact, I’d encourage that for this family.

This is the living room, viewed from the kitchen.

…Dale walked into the shot at the wrong time apparently.

This is Papa ‘n Mama’s bedroom, and behind the wall is the little bathroom they won’t use, so as usual, it won’t get a photo. 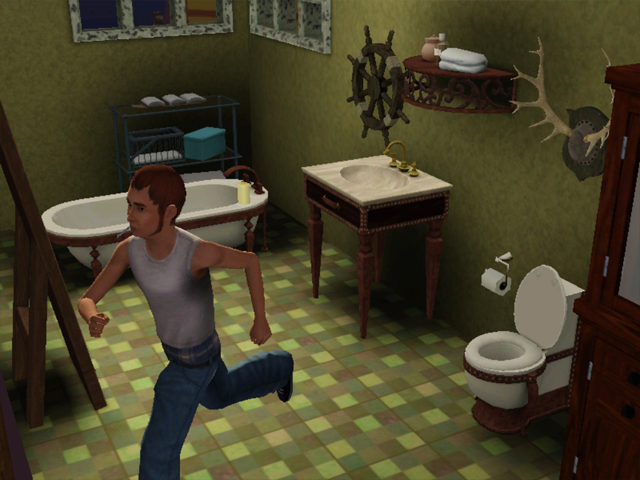 But this bathroom will because the set that comes with Pets is just too cool. 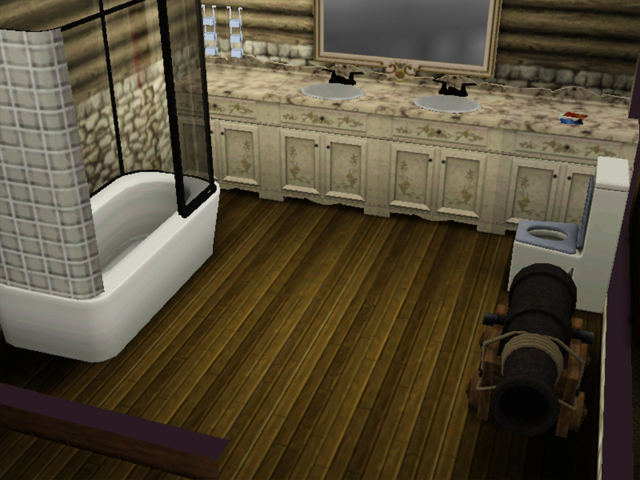 And Tater’s and Bear’s bathroom, because they have a cannon in it. 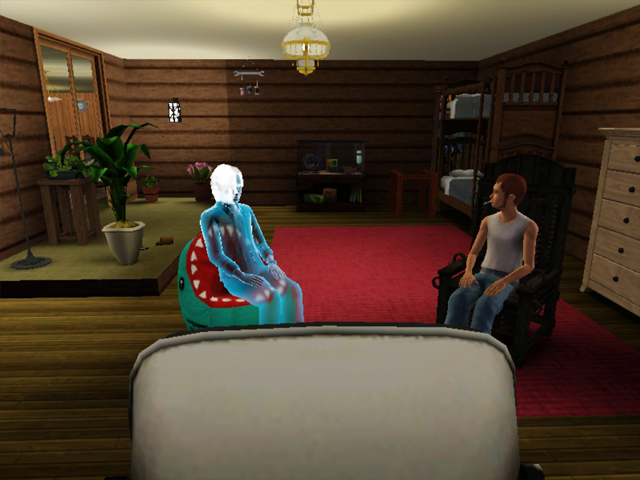 This is the boy’s room.  As you can see, it’s a build-on on the side of the trailer, since there’s part of a porch.

Actually, Tater’s little kinky chair he took from Holloween is broken CC too, but I think I prefer that he sits a little closer to the front edge so he doesn’t have that thing around his neck.

I don’t know Tater, it’s still broken CC and all…

To the left of the property is Bloaty’s house, and the return of a toolshed, where Nascar and Dale bunk together at night. 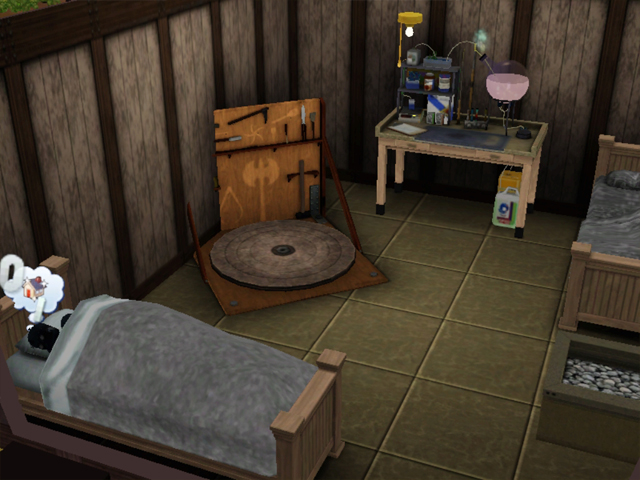 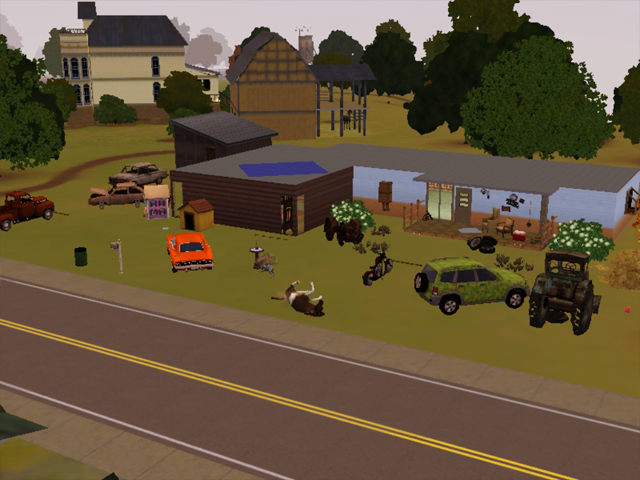 And this is the overview of the whole property, complete with the horse and the dog showing out >:I

“Oh no!  The baby is coming!  This is terrible, my husband is at work and has no way of contacting me at the library!  If only there was a kind soul that was willing to drive me to the hospital right now…”

“SHH, quiet woman!  I sense somethin’ VERY important is happenin’, something much more important that ur baby…” 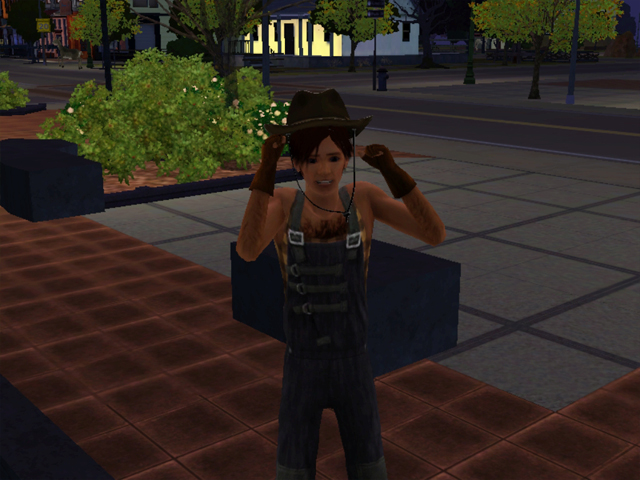 *Sinkhole spits hospital back up*

I make sims legacies and update them once every other blood moon :)
View all posts by missmiserie →
This entry was posted in Generation 7. Bookmark the permalink.

25 Responses to The Towns of Appaloosa