Ugh, Generations.  Why must you taunt me so? I haven’t even gotten Late Night yet ;_;

Moving on, last time we found out that Virginia is pregnant again.  In a twist of ironic fate, all the children in the town started dying off.  Like a horrible plague of, well, death.

“Darr’ll, there yew are!  I have sum great news fur yew babe!”

“Well no, but I do have gud news anyway!” 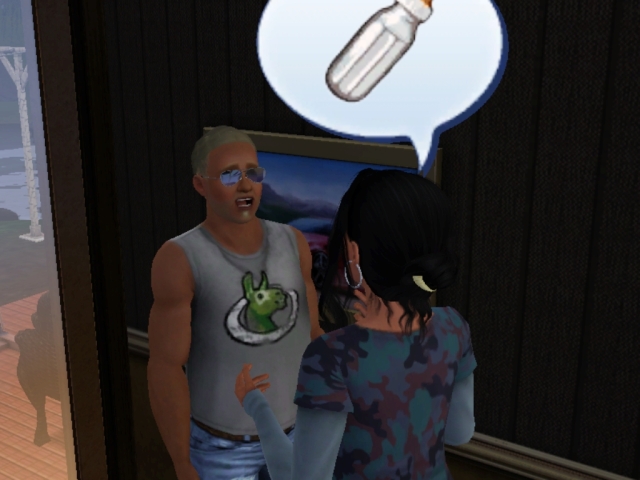 Everybody say AWWWW.  Because I didn’t.

Probably because Nascar is still broken.

Then he proceeded to wake up and officially break right when he had to go to work.

“Ugh, a broken simbot.  This is when they suddenly start their killing software and murder the entire town before finally realizing what they’ve done.”

You watch the action channel too much, Goodwin.

“Why, I would be delighted if you stayed with us tonight, estranged step mother who never talked to me before!  And make yourself at home with my child, as if nothing you just said wasn’t suspicious in any way!”

So eventually my plan to send Secksies to houses to watch the babies of townies turned out to be a bust.  Eventually children started dying anyway and I ragequitted.

Then I tried Twallan’s master controller.  Didn’t work at all.  Messed up the colors really bad, but didn’t do anything.  Then I added SP again.  This time, SP didn’t kill my game (HOLY SHIT) but master controller still made my game all wonky, so I got rid of it.  SP still works though.  I guess it needed MC to break before it could work itself?  I don’t know.

Not even sure SP is working.  But the kids aren’t dying anymore.  That’s a start.  HOWEVER, the game crashes like a motherfucker.  I can’t tell you how many times I have relived the following scene. 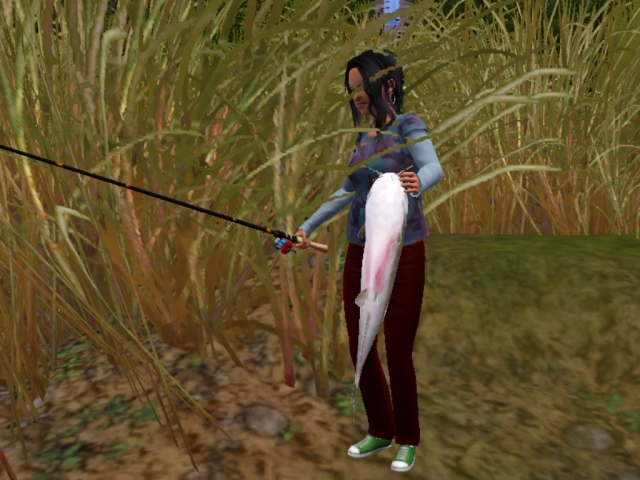 “I’m so damn tired of fishin’!  Wen am I gonna reach level 5 befur I can move on to a new career!? *gets cut in the face by the grass*”

I don’t know, but you suck when it comes to fishing.  Even Jed didn’t take this long to reach level five.

NASCAR!  Stop BREAKING every five minutes!  I swear, this is the first thing he does in the morning everyday since Dodge died!

“No, bad Goodwin!! *zap*  Yew sleep downstairs!  Off the furniture!” 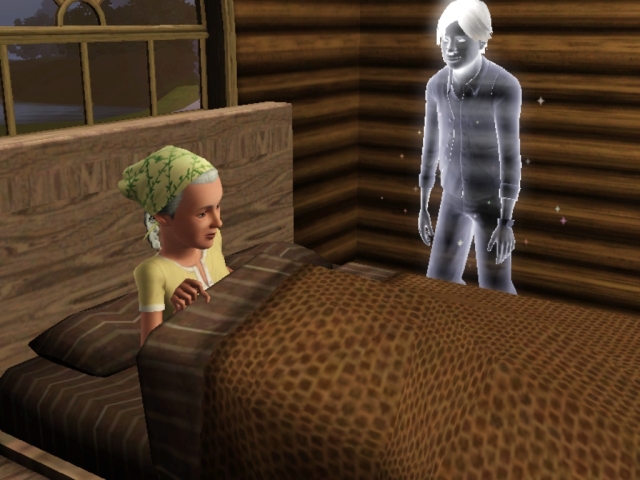 “That was dirty and very mean, Amber.”

About the same time Dixie called guests for her birthday the next morning, Virginia decided it was a good time to break out the labor pains.

“NO VURGINY- oh gawd, squattin’ like this is causin’ my underwear to ride into my ass…”

“Oh my gawd yew guys, calm the hell down.  Darr’ll, go git ur britches’ on n’ let’s go to the hospital.  We’ll be back fur ur party latur Dixie.”

“Mom, nawt in front of my friends, please…”

Virginia and Darrell eventually found the door, and Dixie had to celebrate her birthday with her two best friends, Julie and Deborah. 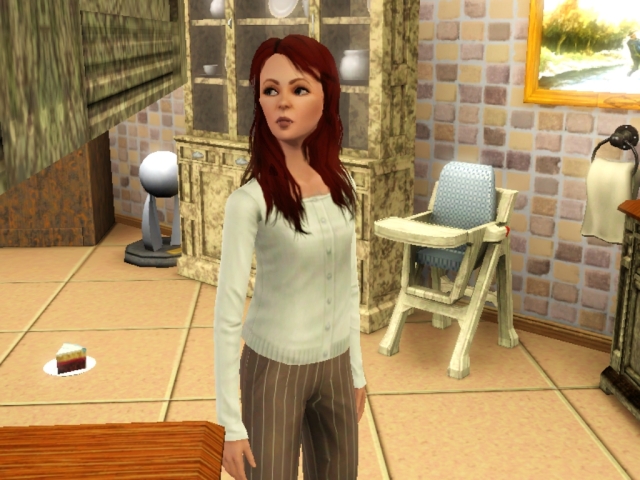 By the way, meet Deborah.  Just look at her!

And I’ll give you ten pretend moneys if you can tell me who her mother is.

“Hi guys, am I late fur the party!  I just got back from breakin’ in the backyard.”

Of course you did, Nascar.

Her trait is green thumb now.  Which is great, because someone’s got to do something with Amber’s garden when she finally kicks the bucket. 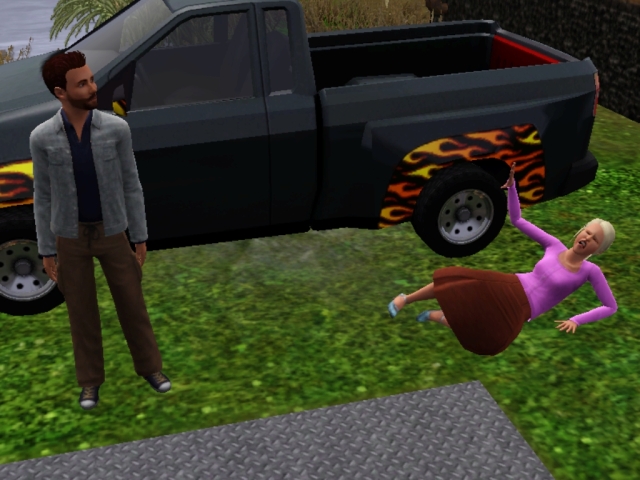 And this is pretty much the end of the party.

“Really?  You really going to embarrass me like this?!”

Don’t be a perv, Dionysus. 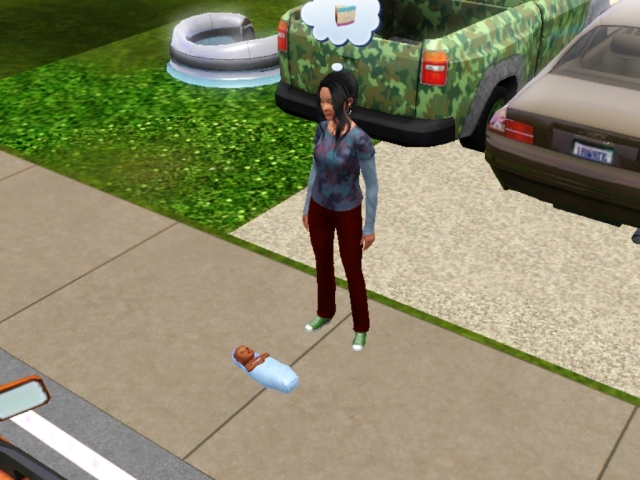 Dammit, Virginia, that’s not how you take care of an infant!

By the way, meet Dale.  Named after the Nascar driver(s) or Hank’s friend from King of the Hill.  His traits are clumsy and athletic, so probably a mix of both. 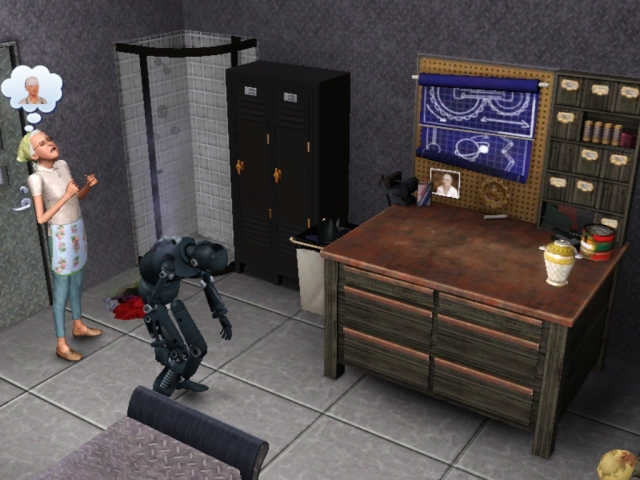 “Oh Dodge!  Why did yew have to go n’ die on us?!  My poor baby!  Yew can’t just leave us like this widda broke down robot like this!?”

Screw you right now Nascar.  Really.  You are doing this on purpose, I know it.

“Who put a baby in the bathroom?!  And stop watchin’ me poop yew lil’ freak!”

Oh shut it Amber and meet your grandbaby.  Considering you’ll be taking care of it for the parents anyway.

“Well where are they anyway?”

“Left hand GREEN, Virginia, did you not hear me the first time?!”

Meanwhile Dixie is doing town stuff.  Being the first genius I’ve had in the prettacy, she keeps finding herself playing chess with people.

That an… interesting LTW to decide for yourself from playing chess.

“Well that’s fine and all girl, but checkmate.  I’ve won this game.” 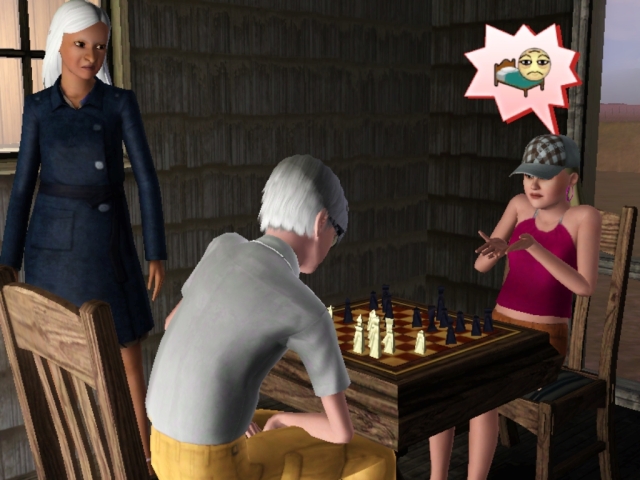 “But… that’s nawt fair!  I was tired, I didn’t see yew move that piece there the first time!  I demand a replay!”

“CYC0NE!  Stop playing strip chess with underaged girls and get your skinny lil’ ass in the house and take care of my Doctor Who babies!”

“But… this is the first time I’ve found someone who can play chess with me on my level!  It’s not FAIR Tamara!  I don’t WANT to take care of your affair kids!”

Yes.  I put the crib in the living room bathroom.  Don’t judge me.

He’ll grow into his Darrell-looks, Amber. 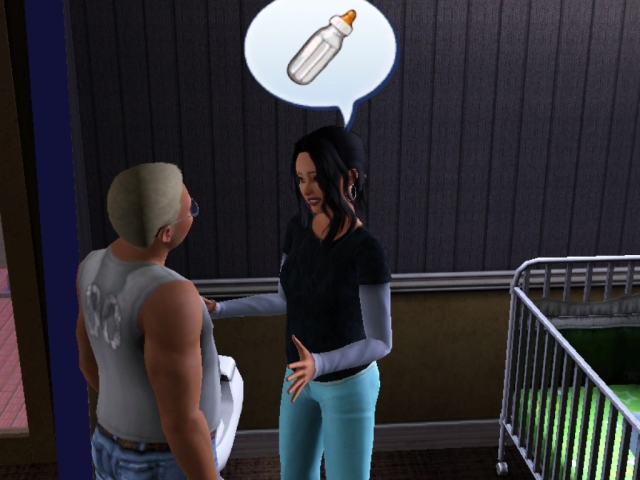 “Oh, that’s WONDERFUL, Vurginyuh!  Oh, I hope we have a lil’ gurl this time!”

*both rolls wants for girls*

Next day was his birthday YAY

Sinbad: “Like I really care about that.  I’ve been in this kitchen all night with those stinkin’-ass dishes!  I’m suffering here!  Someone fix that!”

“Woo, there really are a lotta flies in heer…” 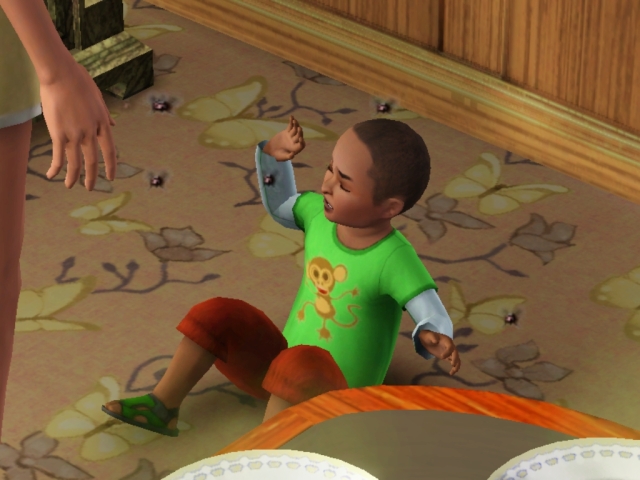 “So then he wus like ‘meeeh I’m the biggest genius in town’ n’ I wus pissed off n’ agreed to that stupid game ‘n I donno how it turned into a game of strip chess.  Ur so lucky Nascar that ur a robot, yew don’t even have to wear clothes!  I wish I wus a robot.”

“ROBOT MONSTER!  Stand up and face my immature gawking and displeasure of your existance!” 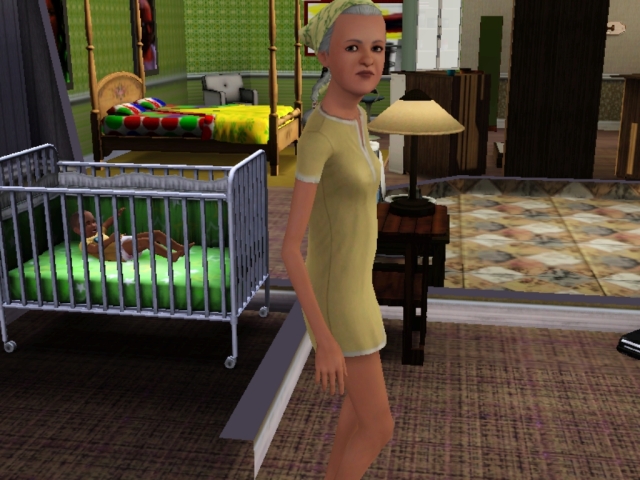 “Well I’m done puttin’ Dale to bed.  Is anyone in the hawse to watch ovur him now?”

“-And we stand here today as the dear departed, Amber Secksie, prepares to take a journey down the valley of death…”

“Virginia, shut up, I’m seeing off your mother here!” 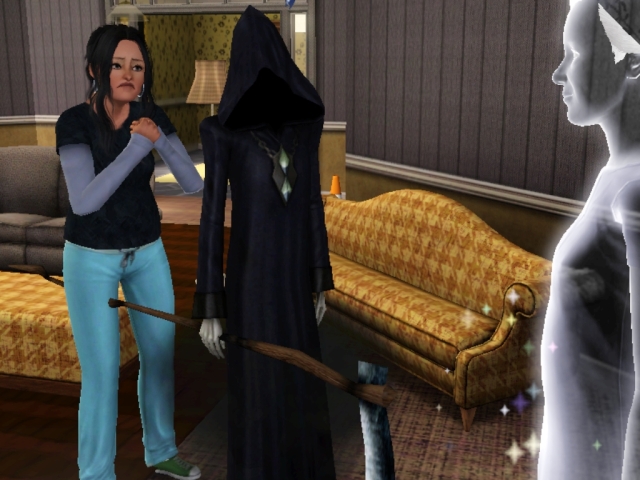 “Mama, this asshole just stabbed me in the leg ‘n-OH MY GAWD ur dead” 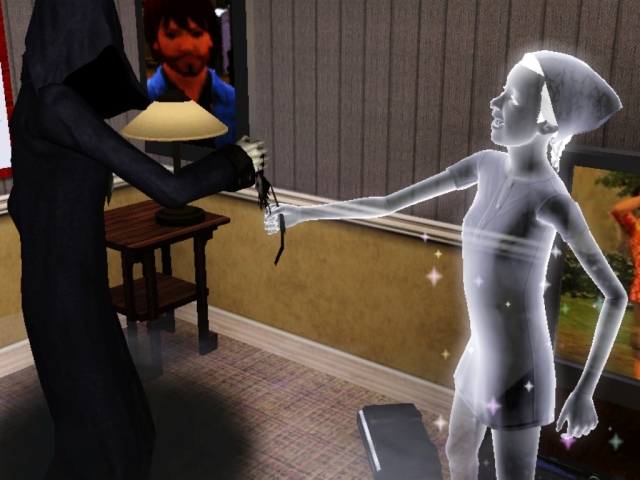 “Where did you find this?!”

“I pulled it outta my garden jus’ this mawnin’!  Now give me my body back!” 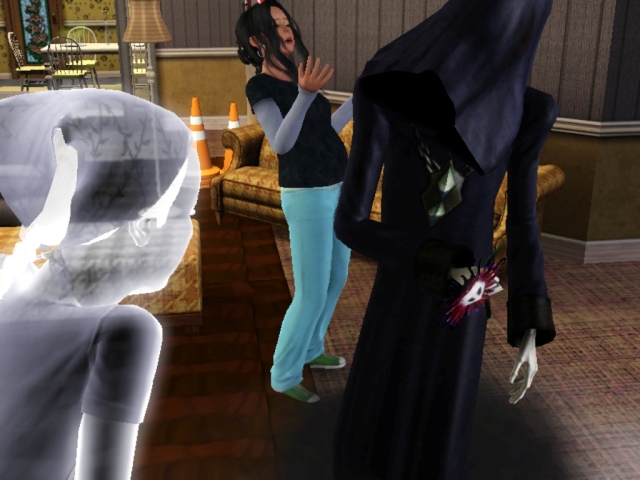 “You sure you want to go back to the world of the living with a daughter like that?”

Dammit Amber.  I love you, but I could really use that extra household slot!

“Oh no, old lady cooties, please step back, I’ll bring the scythe back out if you don’t!”

“No, it’s nawt mama, that Gud’win guy’s being glitchy again.”

“So I just sold a shitload of fish and I’m gonna quit bein’ a fishurwoman now, mmk?”

Halfway there!  So Virginia, what do you want to be now?

No biggie, I’ve had crashes before, I’ll just go back to the last save… which was before Dale was even BORN@*%#@*$@

Of course after that crash, the game went wonky on me again, so the SP had to go, again.  BUT.  I did get it to work again (still crashy though, but didn’t kill the game, so that’s still a good sign)

Next time, we move on to the baby (after Dale), watch the ghosts give me more crap, that kind of stuff. 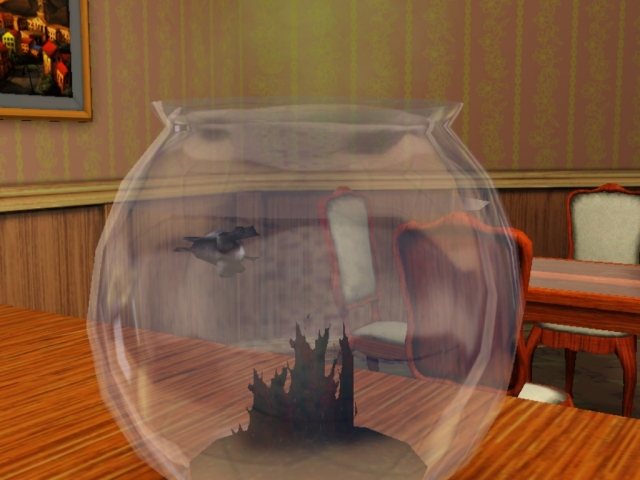 I make sims legacies and update them once every other blood moon :)
View all posts by missmiserie →
This entry was posted in Generation 5. Bookmark the permalink.

8 Responses to Birthday Baby: Part One