So today in printmaking my roommate asked me how she would go about carving moonbeams in her linoleum and I said, “LOL YOUR DATING A CHICK NAMED MOONBEAM IN MY SIMS GAME” and the room got quiet and I stopped talking the rest of that class period.

Jared, when he comes around, likes to yell at the other ghosts and angrily comment on everything.  I still don’t think he took too well to being moved from the theater.

“Fine, let him be an asshole, HEY, someone take me to town now!”

Sinbad, you are not riding in the back like a dog.

“Why not?!  I’ll be good, I won’t jump out or attack people in the Walmart parking lot or anything!”

“Really?  The sink has been held up by this kid for ten minutes!  I’d like to wash my hands and get out of here because the old man in the stall smells like he’s been eating mexican food!” 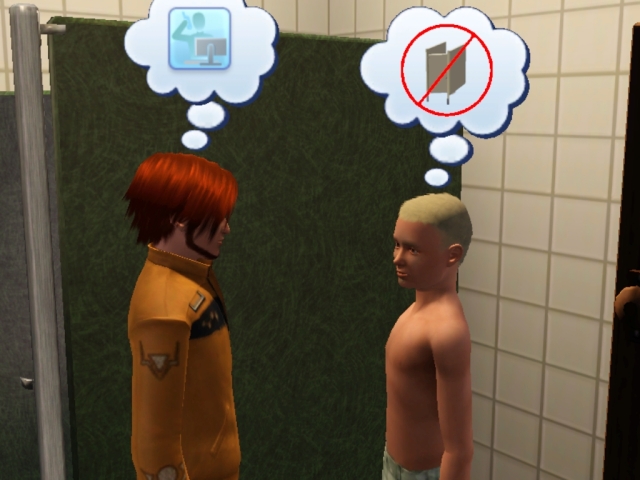 “Oh hey!  We are both workaholics!  That’s pretty neat!”

“HOLY SHIT DUDE WE SET MY BROTHUR ON FIRE ‘N STUCK ‘IM IN THIS VASE ‘N BURIED ‘IM IN THE YARD IT WAS HORR’BUL!!”

“YEAH HIS BOYFRIEND WAS ALL NNNEEAYH AND WARR’N WUS LIKE UUGH AND HE DIED IN A PILE OF HIS OWN POOP AND I’VE BEEN SAD EVUR SINCE.”

“I’ve lived with my insane brother for all my life and heard some crazy shit, but I still have no idea what the hell you just said!”

“Yo you two, am I the only one that noticed the hole in the wall between us and the girl’s bathroom just now?  Shouldn’t we call someone to come get that fixed?!

“Gross.  Can’t you smell that, Jamie?  I think that guy blew up that toilet with some cheap burritos or something.” 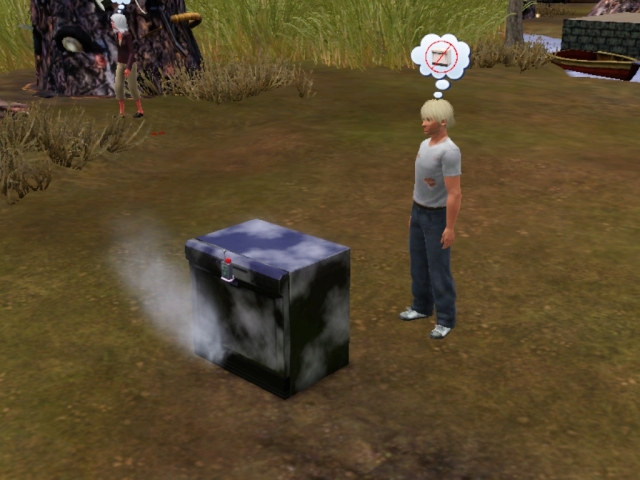 Meanwhile across town, Dodge was getting some wishes related to scrap metal fulfilled.  Once again, he was back to trying to successfully blow something up.

“This dishwawshur sounds like it’ll blow up on it’s own!  That’s great!  I just gotta edge it along!” 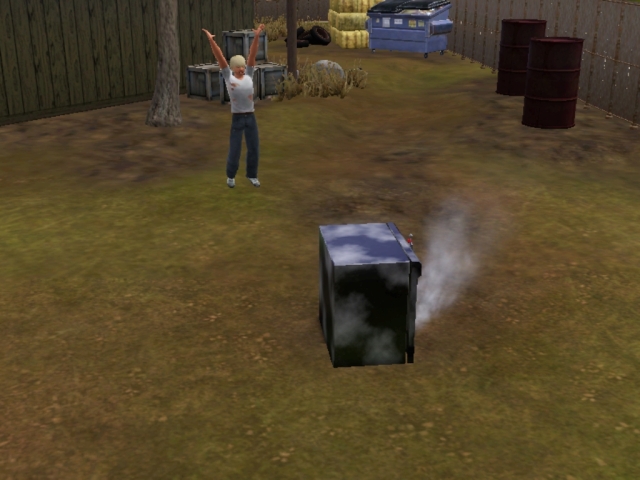 … uh, Dodge?  The washer is still there. 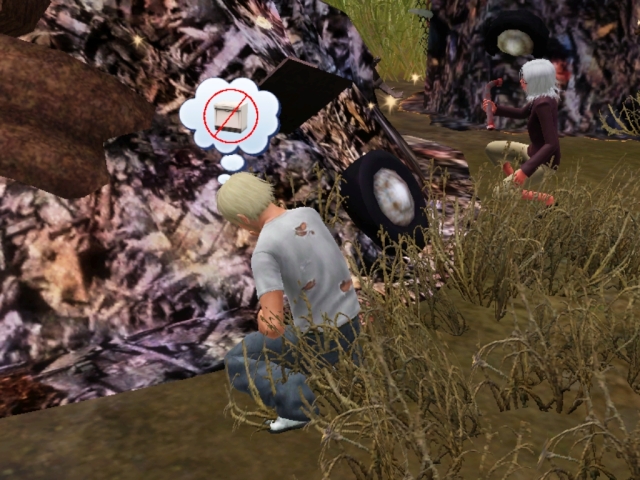 “Hey Dodge?  Does this look like crusty gore to yew?”

I know, why didn’t the washer blow up?

Oh, nevermind, there it goes. 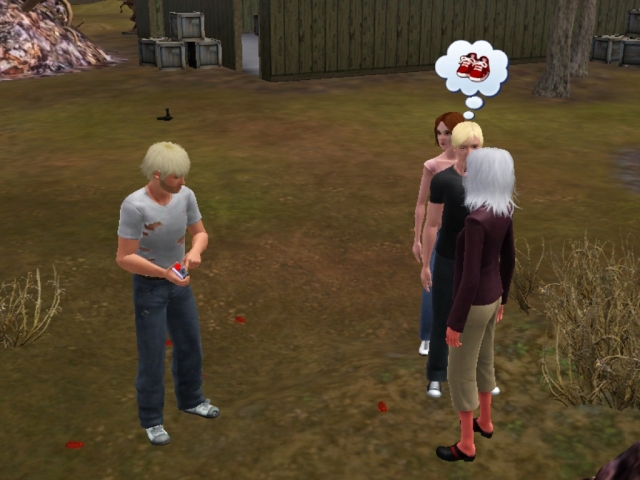 “Um, I think I’ll pass, I kinda want to live long enough to have children.”

“Then yew bettur stand the fuck back.” 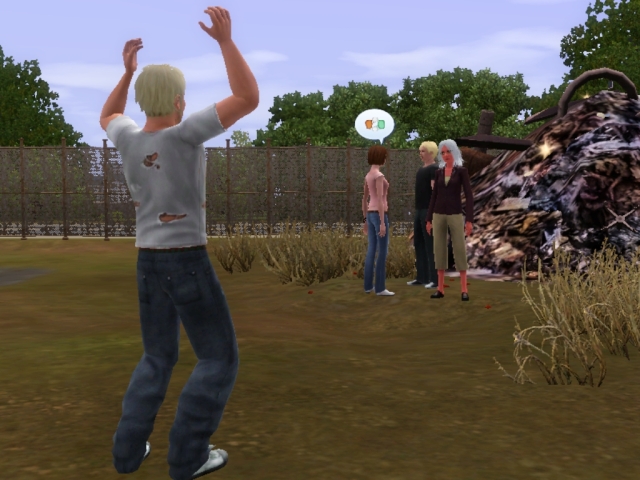 “Wut the hell is my nephew yellin’ ’bout over there?”

“I don’t know.  So anyway I was like, yeah, and she was like, no way, and I told her that I totally saw the Overly Happy Lake Monster eat those two kids, and she called me out on being a liar and I said no and she was lik-” 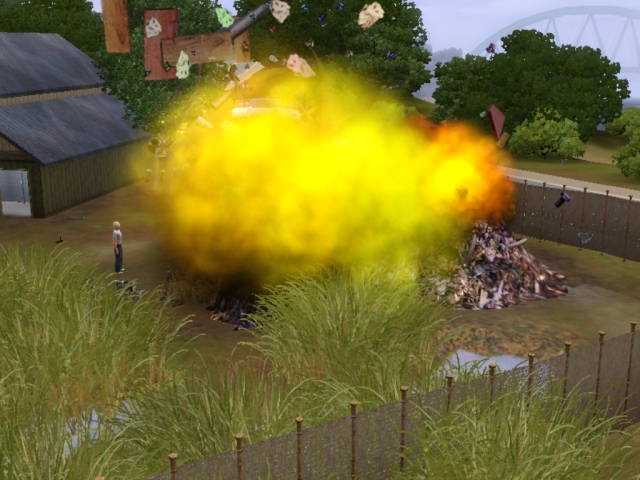 And yet I like how Dodge stands there calmly as giant plywood boards rain down above him from fifty yards up. 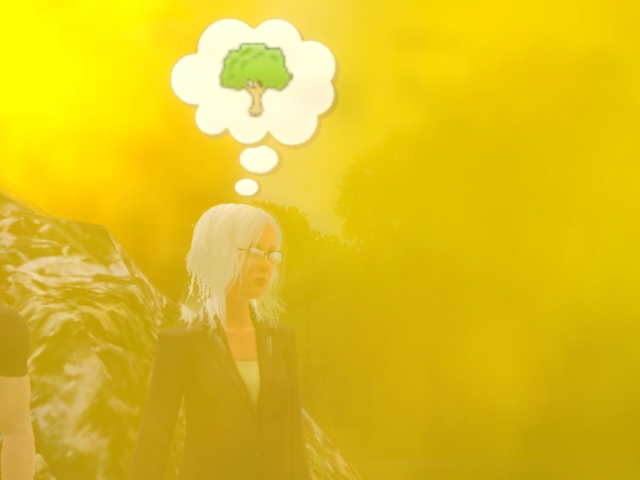 “OMG WERE THE TREES DAMAGED?!”

Oh Berkleigh.  Someone has problems, and I think it’s you.

“How do you just realize that you have been fried?”

“I don’t know, and I’m trying to figure out why that woman over there isn’t fried either…” 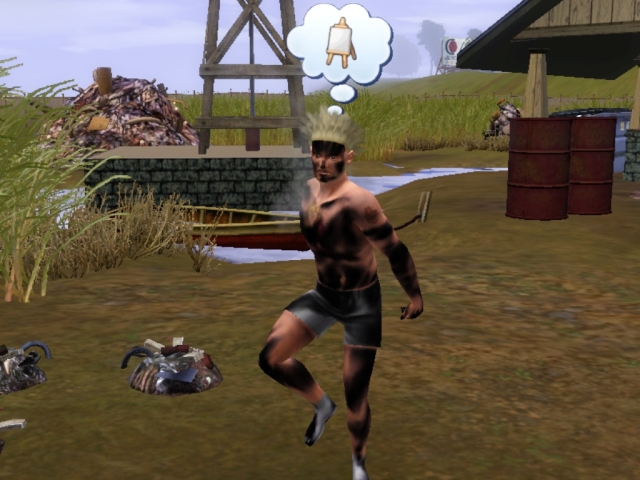 Next to realize that he was fried was Dodge, and he was the farthest away from the blast.

“GAWT’DAMMIT!  And I was hopin’ to luk nice fur wen Jurry repainted my portrait this afturnoon!  Now I can’t do it ‘cus I luk like shit!”

“Oh NO!  N-now I git it!  It’s one of dem cawntagus’ chemicul burns!  And it’s spreadin’ frum purson to purson through the air!  I gotta get outta heer, I’m nex-”

“Do you understand a word that old lady is talking about?”

“No idea.  Let’s just go home and research baby stuff, you know, STUFF WE WERE PUT HERE FOR” 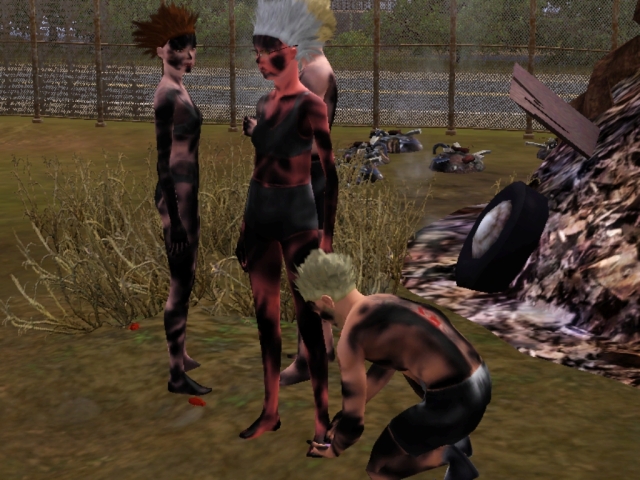 “Soooo, wut am I doin’ heer?  I thought I was gonna go luk for the mythicul’ ‘hot man at the beach’ the playur thought she saw.  But I got invited ovur to the new kid’s hawse!  I’m so cunfused.  I thought there weren’t any other kids in town besides my cousins!”

Yeah, me too.  But when some random name popped up I’ve never heard before invited you to their house after school, I figured it was worth taking a look at. 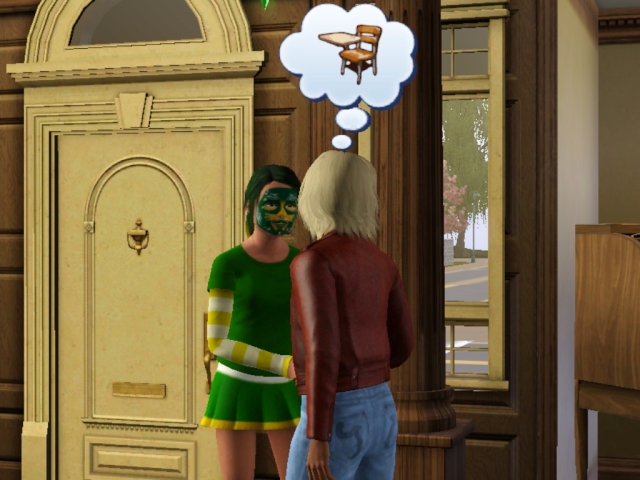 “Oh yeah!  I’m new to school and all, movin’ heer like, just last night and stuff.  I just thought we could be friends ‘r somethin’.”

MY PRAYERS.  THEY HAVE BEEN ANSWERED. 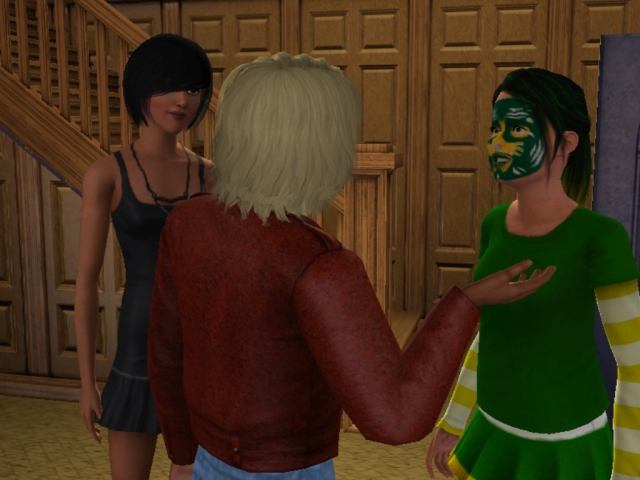 “Oh, glad to meet yew!  And this must be ur older sistur!  She’s very purdy!”

“Wen I grow up, I’m gonna be a robot, just like daddy always wanted!”

Oh silly little Lonnie.  Still as insane as ever I see. 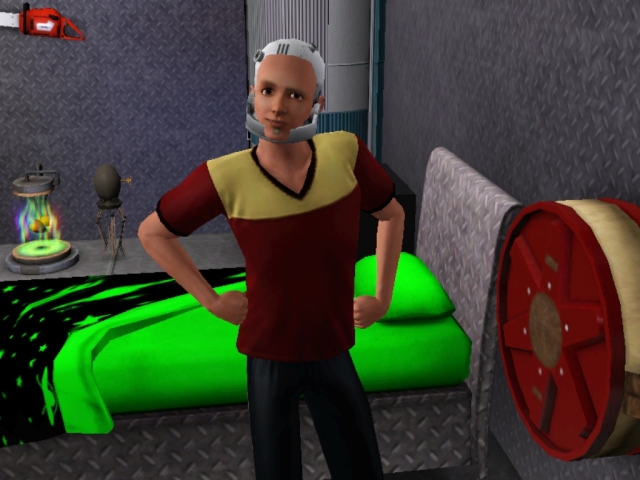 “Wut wus that?  Didn’t hear you ovur the sounds of me growin’ up…”

“Oh shit, I knew I shouldn’ta had all that fone sex with 1-SEX-SIM-BOTS while I was preg’nint wid that boy.”

Meanwhile, the shock of having a son that is half human/half simbot caused Dodge to inexplicably piss on a dirty plate.

Really Dodge?  At least pee in a can like most people do when they are outside. 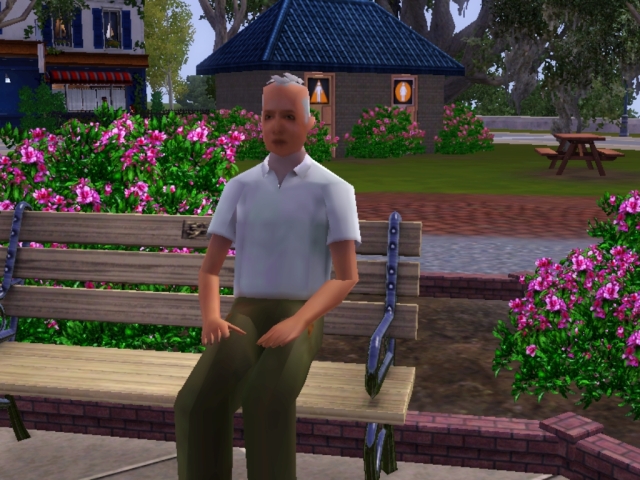 I keep seeing this old pixely fart in the park.  It’s as if he has nothing better to do than to come to the park all day and lag me up with his old ass >:I 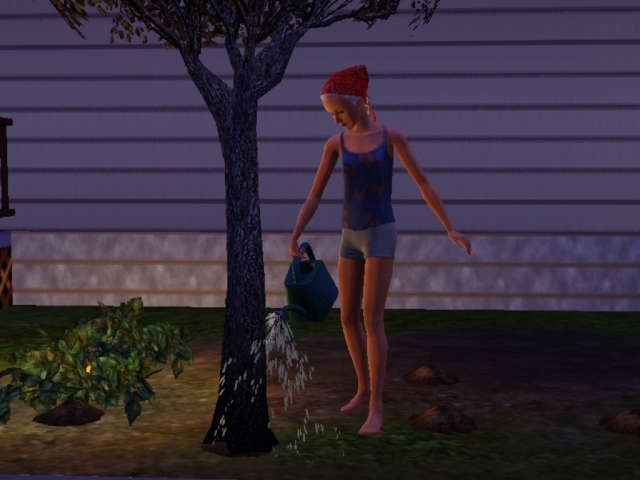 “There’s nothin’ like gard’ning in the middle of the night.  The sound of the wind blowin’ through my lil’ orcurd’, the smell of the wet dirt…  does anyone else hear the sound of racoons in the trashcan again?”

Um, Lonnie?  Where did you get the police suit?

“Oh, I skinned it frum the cop that arrested me a coupl’a nights ago wen I was a teenagur!”

… You stripped a cop?

“HE FELT MY REVENGE IN FULL!” 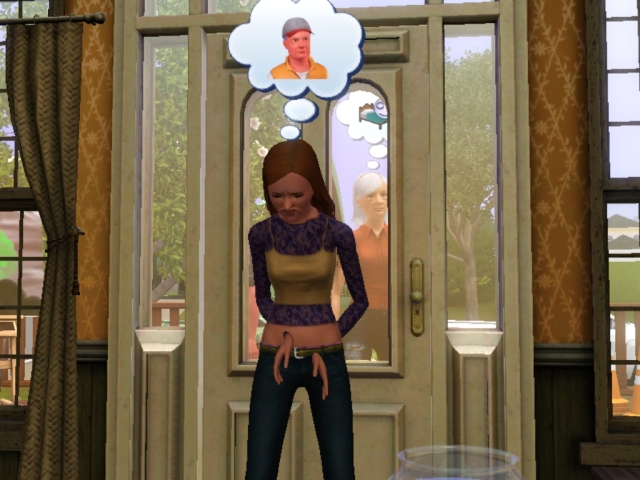 “AMG that Jed guy is so hot, it makes me want to TOUCH MYSELF INAPPROPRIATELY”

Marissa, I no longer claim you as my sim daughter.

As if you can’t tell from Marissa’s random appearance, it’s time for a party and-

Why are you still fried Berkliegh?  Can no one bathe themselves on their own? 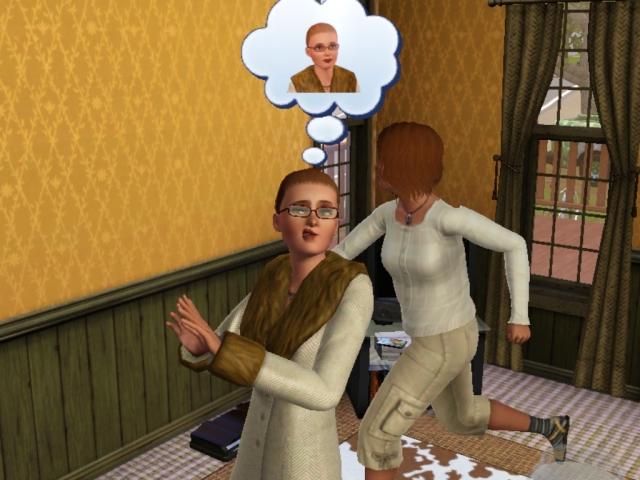 “Oh barbaric.  I moved out only a week ago and this house has become a massive pig pen!” 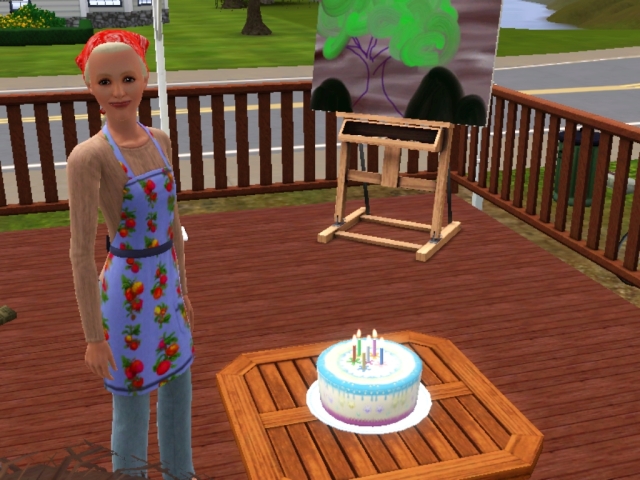 Yes it is, and I’d wait for the guests to figure their way back to the porch but you know… guests… 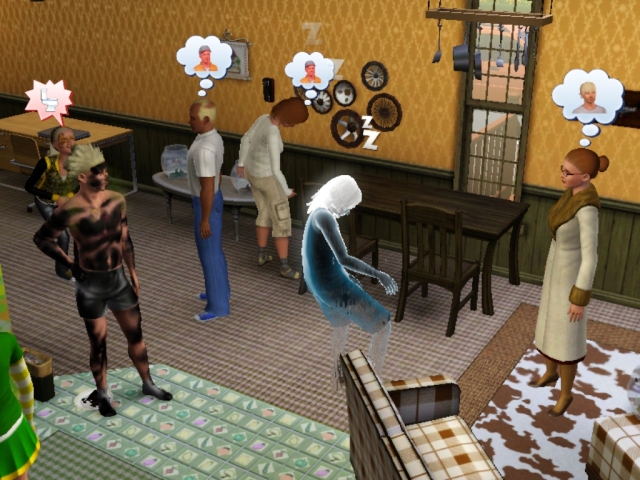 There are at least four things wrong with this photo.  Shark is two of them.

“Oh Heidi ur rich gurl coat is so WARM, I wish I tried this on when yew still lived with us!”

“Oh Heidi ur insides are so soft, Shark wonders why Shark didn’t wandur into yew befur!”

“OH GOD BEING OLD IS HARD”

Old Amber is old now.  She’s not to thrilled about it either I guess.

Her party ended with Micah clapping and watching and cheering for the duck invention thing for about TWO HOURS like a moron.  Never seen someone get so excited over a damn duck that’s been in the family for four generations.

At the same time, across town, Lonnie went to work at the warehouse to begin his LTW of following in Sinbad’s footsteps as evil world leader.  Of course, all today he did was meet his new coworkers, chat over the water cooler, talk about how they got into the business, trade info on each other to become better work buddies

“I know you are here, Lonnie!  We know you took all of my uniforms, and you are under arrest for assulting an officer and violating me!”

HOWEVER, instead of getting Lonnie, the cop went in, came out, and got back in his cruiser.  Without Lonnie.

“Well, Lonnie wasn’t in there.  Just a robocop unit.  He said he was on duty so I told him to look out for that wanted criminal, so I’m leaving.”

Um… the robocop WAS Lonnie, you moron.

“I HAD TO DITCH THE COP UNIFORM MAN, THE FUZZ IS ON TO ME”

I still don’t know how you managed to avoid getting arrested, that must have taken some special skill!

Did you REALLY just drive to the station to turn yourself in?!

“Of course I did!  I want the world to KNOW that I killed a cop!”

You just took his clothes!

Before we go though, have a little tidbit about the Slobacy.  I found an old back up town, back when Jed was just a baby and Melissa was a young adult

Turns out at some point in her young life, she was level 8 in the fashion career.  LEVEL 8.  With NO fashion skill WHATSOEVER.

Amy is rolling in her grave right now.

I make sims legacies and update them once every other blood moon :)
View all posts by missmiserie →
This entry was posted in Generation 4. Bookmark the permalink.