Posted on February 6, 2011 by missmiserie

Sooo, last time the girls declared a rivalry over football.  Of course, that’s pretty much where it ends. 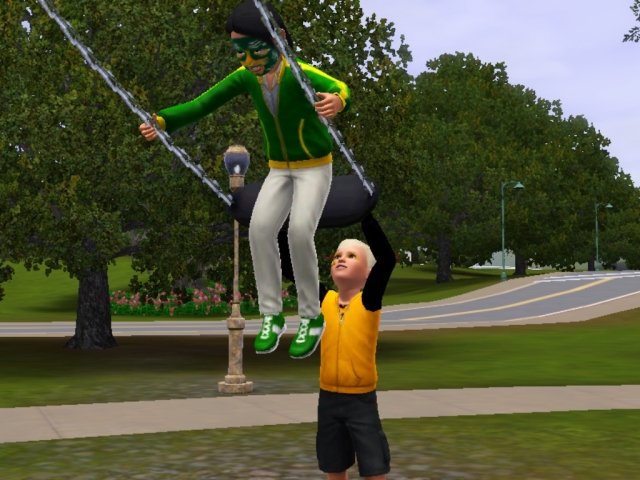 Other than football, the girls are on pretty good terms with each other.  Virginia and Jerry are actually really close friends.

“Hmm, maybe I should strap that bed down to the flur’r somethin’.”

Maybe you should call an exorcist.

“Oh, were yew wantin’ Shark to put the bed down?” 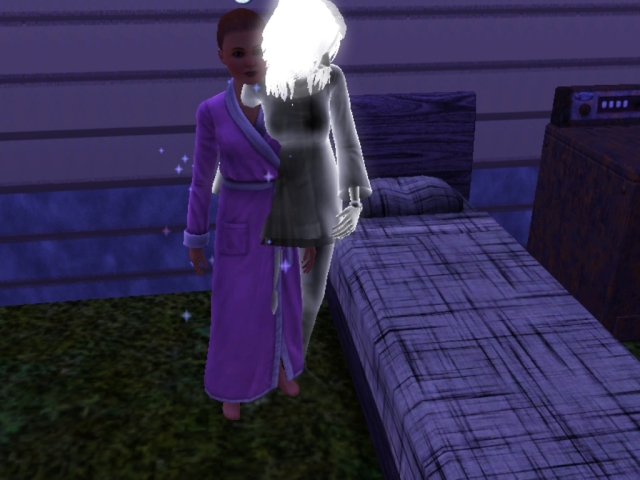 Dodge isn’t the only one having problems with ghosts in his bed.  I think Heidi has it worse. 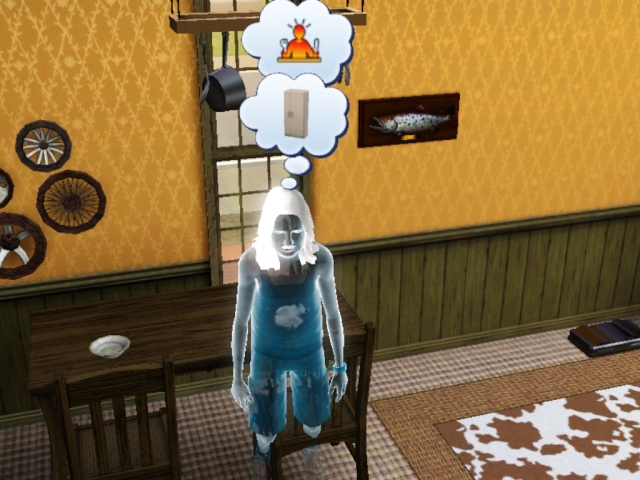 And shut the hell up Shark.  You are dead.  You aren’t starving to death.

“Such a lovely day today.  The burds’r chirpin’, the fish are swimmin’, and the sun is bright…”

Dodge is busy destroying the yard.  Heidi’s busy peeing on the floor again. 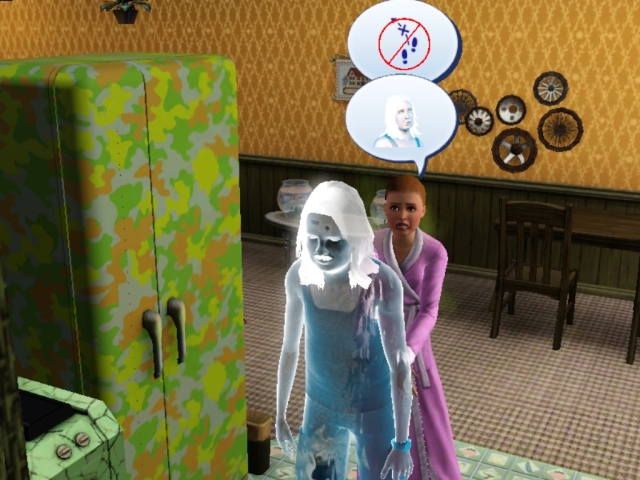 “And why is there a line for the refrigerator?!  What is wrong with this man, and why won’t he move?!”

Because Shark is an asshole bent on destroying us.

“You moochers need to find your OWN FOOD!”

“Ah!  Pancakes!  I don’t know who’d leave a plate of purfectly gud pancakes out in the yard next to the truck!”

How’s the garden coming along, Amber?

Now that I think about it, neither do I.  Stupid tree and it’s obvious vines are stupid.

Enjoying your day out I see?

“I enjoy my solitude, thank you for asking.  It is so hard to find someone in this town that can quite match my intellect and common sense.  Sometimes I believe I am the only one that is a match for someone such as myself.  Did you know I cannot play chess with anyone in this town?  None of these residents can seem to keep up with me nor have the strategy to compete with my intellect.”

You really need a boyfriend. 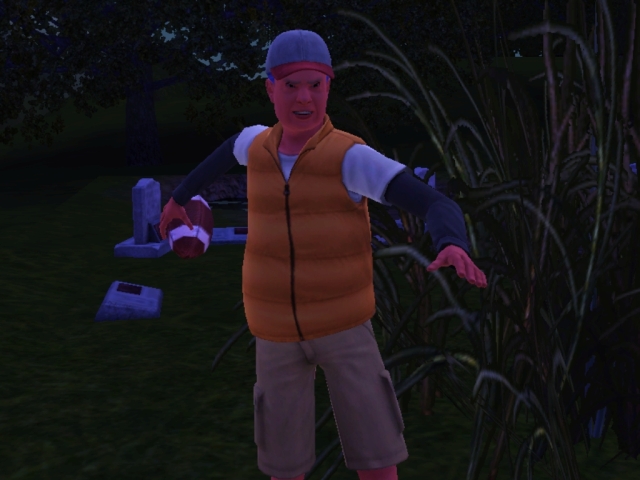 Goodwin!  What are you doing?!  I swear if you wake them up…

Screw you Goodwin.  Screw you and all the ghosts.

“Hello people!  A greetin’ frum the undurgroun’!  I speak on behalf of the moles!”

Glad to find that you are so at home in the dirt, Dodge. 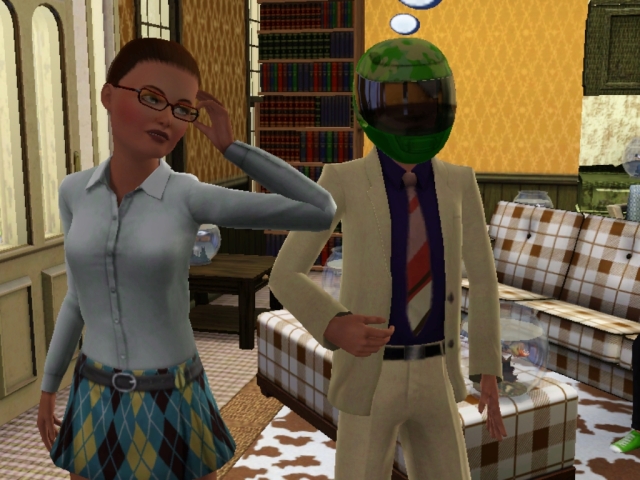 “Oh my goodness Lonnie.  What do you think you are now?  A BMX motorcyclist?”

I don’t know why I let Lonnie wear a helmet.  I just wanted something different with my lack of hair styles.  Hell, why not.  Don’t know why he insists on his formal every time though.

“Why lo and behold, Mario!  I have found a truffle in your store!  It may be on the floor, but these things are a delicacy!  Why, if you do not mind, I think I will have at this!  And no, I shall not share!  I found it, it is mine!” 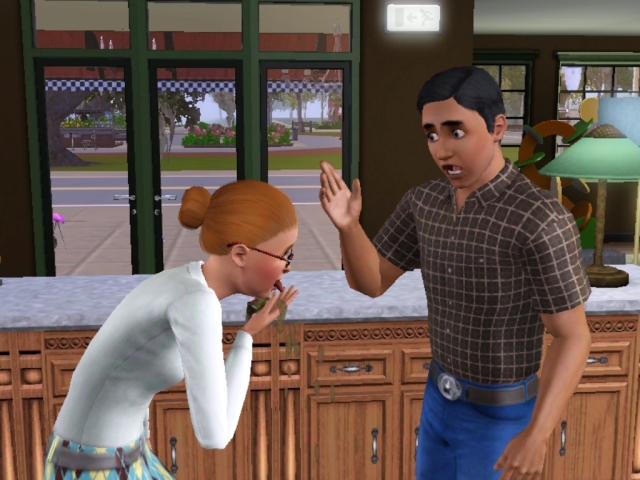 She’s been hanging out with her father too much.

I find it a little strange that sims just laugh on the phone no matter what the call is about.  You want to talk?  Hahaha!  You are moving?  Hahaha!  Someone I was close to has died?  That’s HILARIOUS!  Become a comedian. 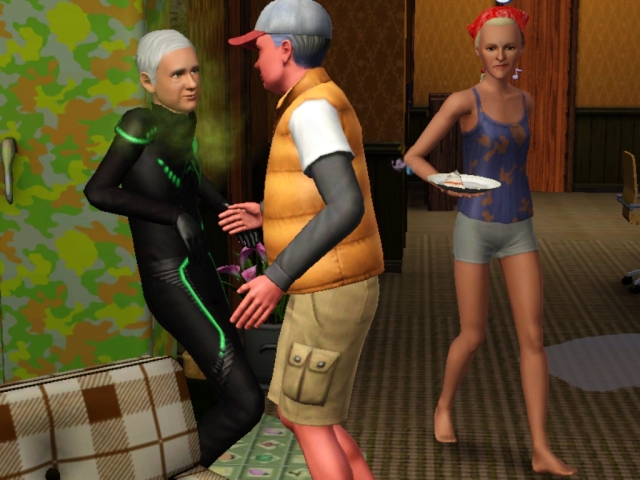 “Why are those two old farts dancin’ togethur in my kitchen?”

To be honest Amber, I’m just as surprised as you are.

“Oh grammpaw.  You have such beautiful eyes…” 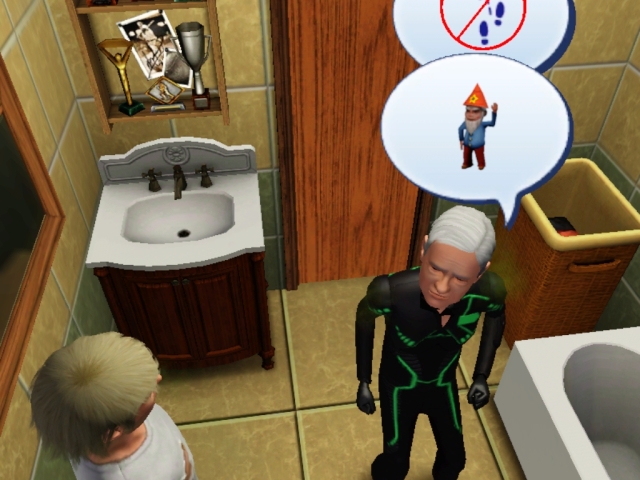 “But dad!  There’s a gnome blocking my way!”

What the hell are you talking about Warren?  I don’t see anything except the bathroom.

“Ugh, well of COURSE you guys can’t see it!  It’s invisible and you can only see it if you really believe in it!”

I’m starting to think that Lonnie isn’t the insane one around here.

“Humph!  On Saturn we didn’t have this problem!  Gnomes died out during the great Gnome Extinction.” 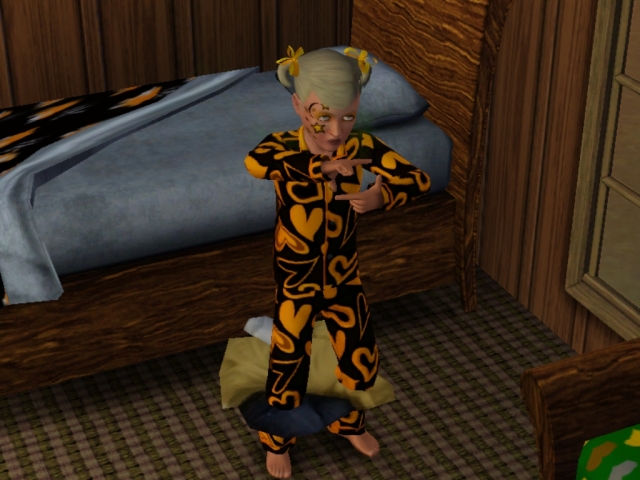 “Wait, if I’m standin’ ovur my clothes, does this mean I’m gettin’ felt up?”

… What?  How the hell did you come to this conclusion?!

Leroy, stop being such a creeper.

“Hmmm, the sink’s brokun again.  And my angel cake is on fire.  How contru’dictree.”

I hate the sink.

I also hate the shower in the garage.

“I hate havin’ to fix everything.”

I think your grandfather might be lost dear.  Just push him out of the way, or lead him to a corner or something.  He’ll be fine.

“Check Shark out!  Shark is GHOSTRIDER!”

Get out of the Harley Beast, Shark, it doesn’t like you.

“Hm, I think that’s all I can get outta this hole in the ground!”

Am I the only one that sees the creepy skull face in the meteors?  Please tell me that’s normal.

Great detective skills genius.  Now let’s sell these eyesores before the children see them and become scarred for life. 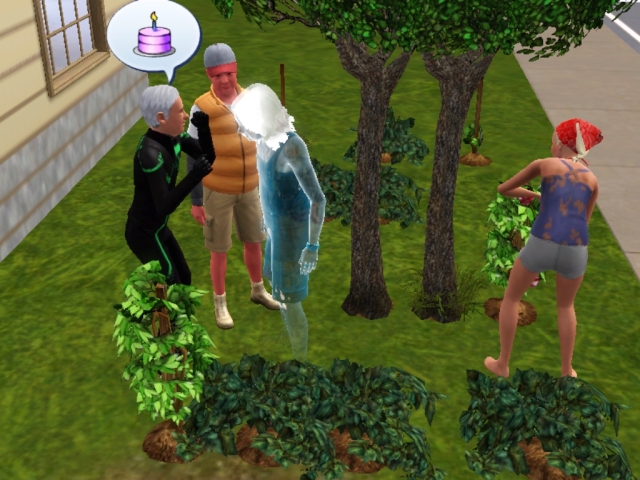 “You tell the worst jokes, grandson.”

“That reminds Shark, yall think there is any cake left in yall’s fridge?”

“Hey guys.  How ’bout instead of standin’ there with ur thumbs in yalls asses and help a lady out.” 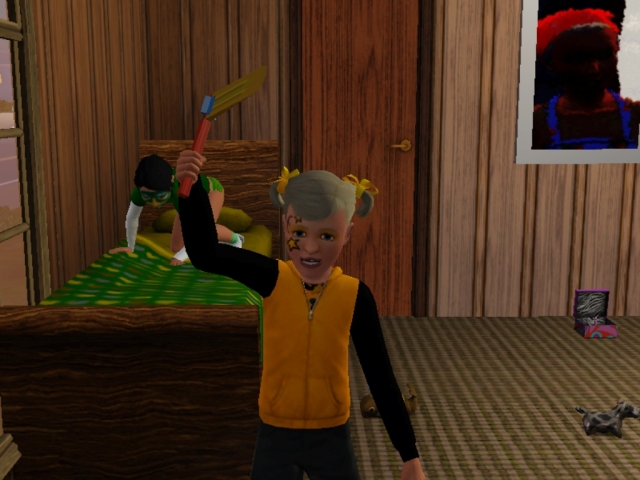 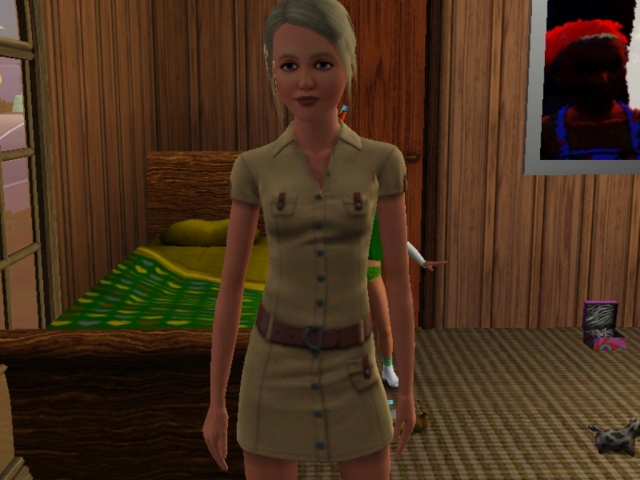 Oooh, pretty.  Kinda looks like Ellie without the chin I think.

And of COURSE she rolled athletic.  Who didn’t see that coming.  Really now. 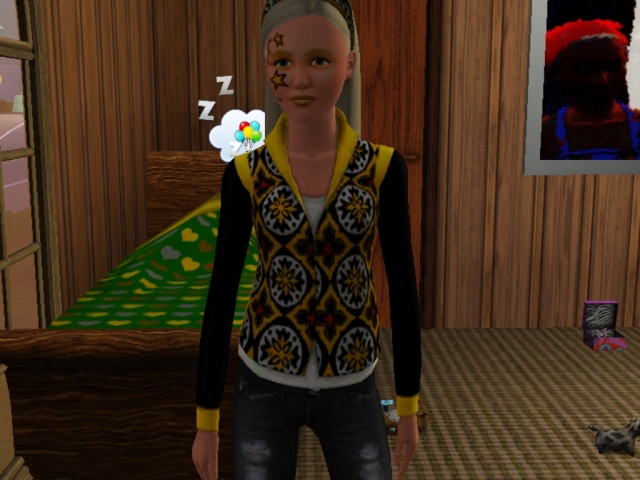 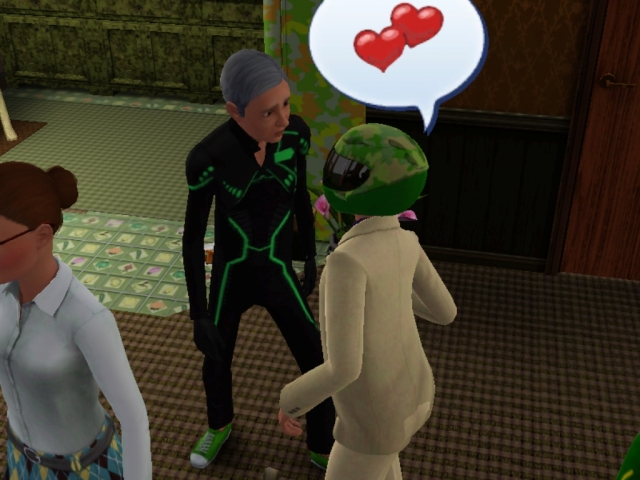 “Yew need to get LAID bro!  Check out that chick in the skirt ovur thur!  Hot stuff right?!”

“Lonnie!  Wut’s gotten into you dude?  That’s our sister!  Did you forget again?!”

“I bet she puts out!  I saw the way she told yew to get the hell outta the bathroomm jus’now!  She’s got it out fur yew man!”

“Lonnie!  Get ahold of yourself man!  Take your meds!  You’ve gone crazy again!” 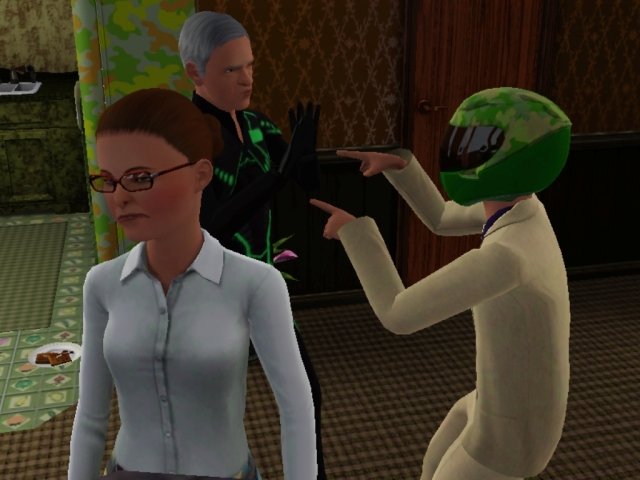 “Dammit stop Lonnie!  Go take your ritalin and calm the fuck down!  Jeez!  On Saturn we would have long sent you to the Recycling Plants!”

“I live with fucking imbeciles.” 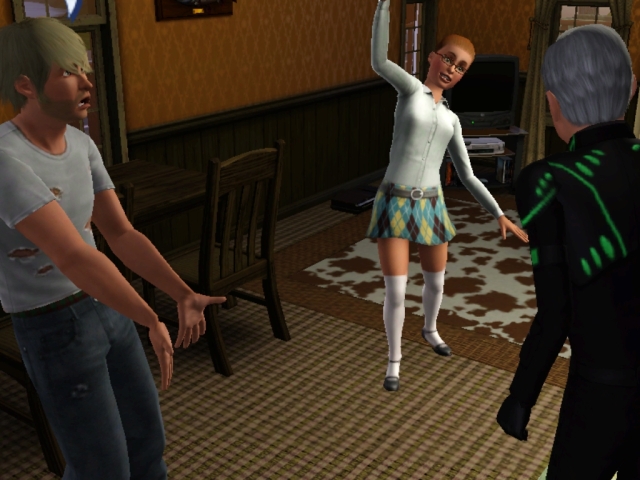 “But not for long!  Attention everyone!  It’s my birthday!”

Uh, well, that’s only half true…

“Look father!  Am I not a gorgeous lady?” 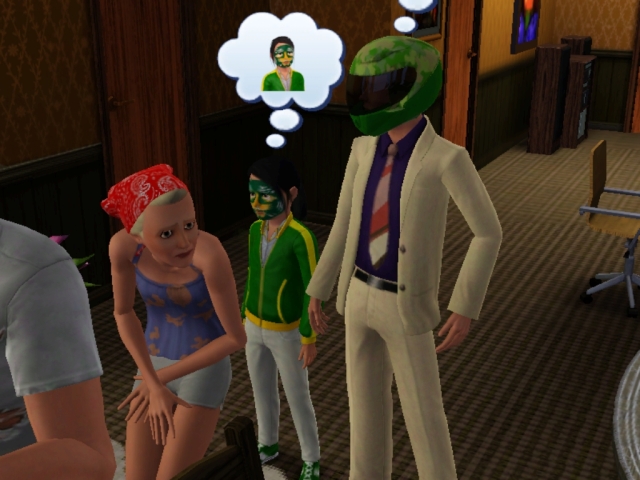 “Wow, Shark told me you were batshit but I thought Shark was just pullin’ stuff out his ass again.” 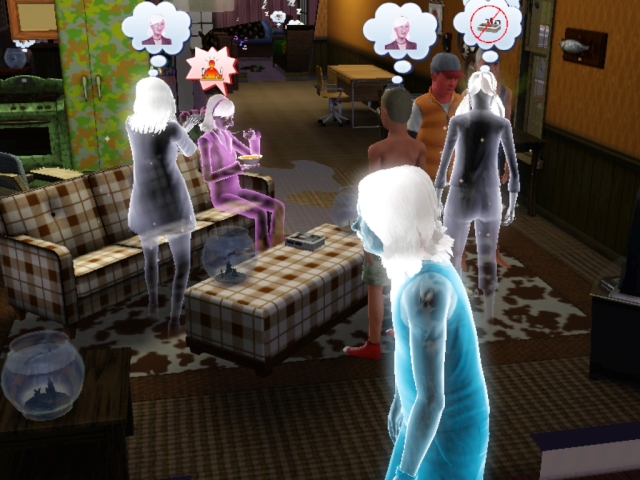 Thanks for that observation, Melissa.  I kinda noticed from the giant ass puddle in the kitchen. 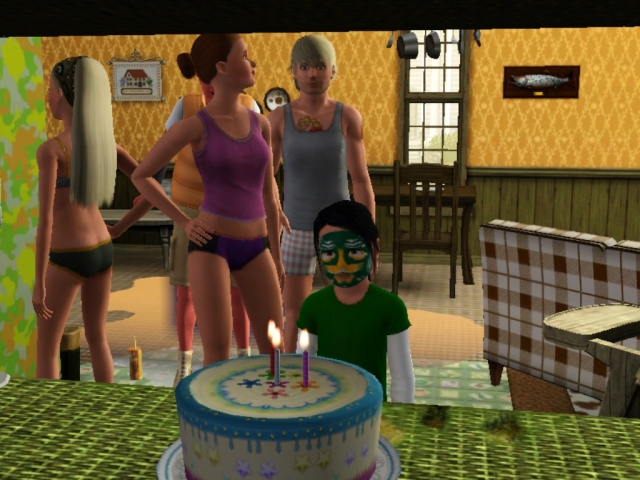 The following morning, Virginia got a cake, pretty much because they are out of cake leftovers in the fridge.

“Pfft, you only gave Virginia a cake because you dislike me.”

Not true Heidi, stop being such a drama queen.

“Fur my birthday wish, I want the Packurs to win tomarrow at the Superbowl!” 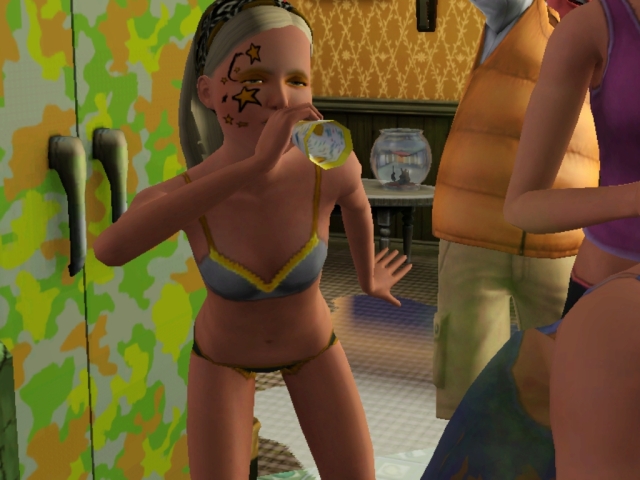 So here’s our new, unflirty, Virginia prior to makeup.  Kind of like a black haired clone of her sister…

And here’s Virginia now, ready for the Superbowl tomarrow.

So yeah, there you go.  And I’ve came up with an idea for the next chapter.

The Superbowl is tomarrow, right?  So here’s the plan.  I’ve decided that whichever team wins, that fan is going to become heir!  Besides, they both look alike anyway, not really risking anything.  And besides, I don’t think poor Lonnie’s going to be in the running anyway, he’s just too droopy looking.  I guess he’s what happens when your sims imbreed?  I don’t know. 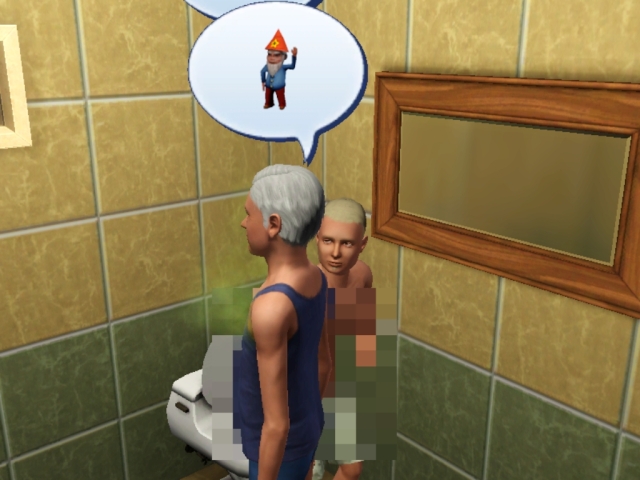 “We really got to do a thing about this invisible gnome…”

“And I got to do a thing with yew comin’ in heer and interruptin’ my crap!  Guess they don’t have mannurs on Saturn, huh?!”

“They don’t have toilets, thought I already told you this!”

So who will win?!  Packers and Virginia, or Steelers and Jerry?!  I’m just going to be watching the Superbowls for the commercials, personally.

I make sims legacies and update them once every other blood moon :)
View all posts by missmiserie →
This entry was posted in Generation 4. Bookmark the permalink.

16 Responses to The Invisible Gnome