Not Just Some Legacy Babies

Anyone enjoying the Christmas holiday yet?!  I know I am!  There’s nothing like returning back home to the swamp to find all your connections to the outside world cut off, eventually including your own car, and then ending up going to numerous Christmas gatherings with family you don’t really remember how you are related to and babies puking all over the carpet.  SO MUCH FUN

Um, Jed? I don’t think there are any fish right there on the coastline. 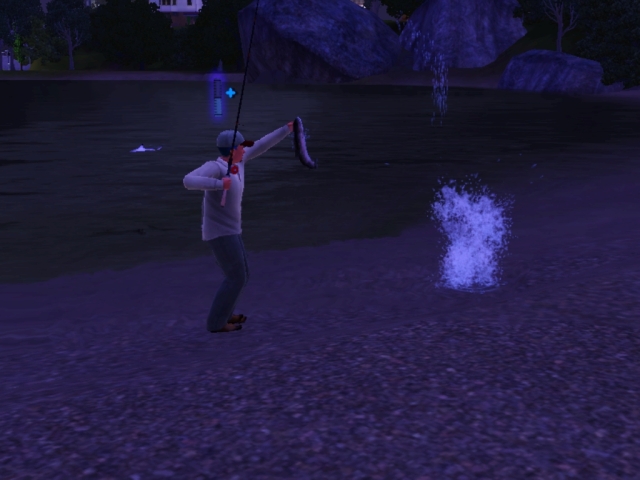 Well.  Sure showed me. 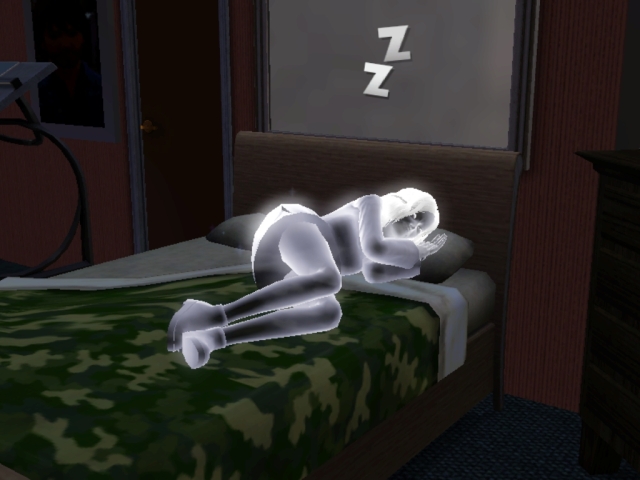 I’m back to having a stuck ghost in the house

At least I don’t have to worry about her starting fires on the stove constantly.  Lucy entertains herself in an old lady fashion.

“Get that shit outta here!  Sinbad, take ur teabaggin’ like a man!” 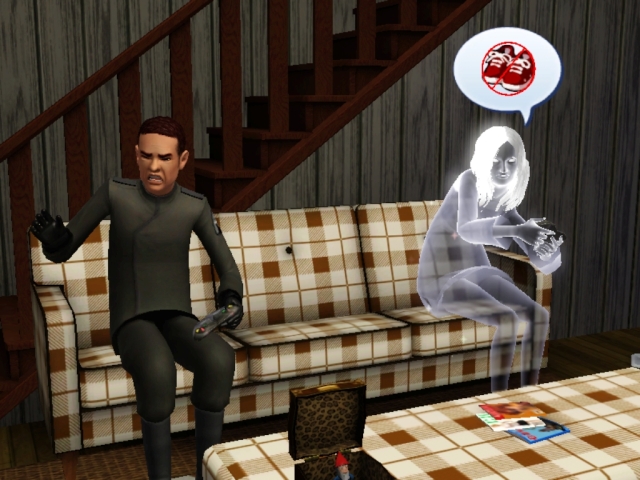 “Lucy?!  Why did you kill my only wife?!  Now they took my child away!  I can’t get Colonel Badass back at the brothel!”

“You don’t know that Sinbad!  HAH!  Besides, I hated ur lil’ brat child, I hate all children, remember?!”

“Fuck you Sinbad.  You broke the tv anyway, assface.  Have your lil’ wife and digital child back for all I care.”

“Did I come in at a bad time to smack around my step-grandson?”

Luanne is still around btw.  She spends most of her time being senile in the living room with her little music box, waiting for some poor sucker to come through the door so she can pounce on them and ramble on about why the democrats at her place of work suck so much or something.

At her rate, she won’t be getting to the top of her career.  Ugh.  All her friends are dead. 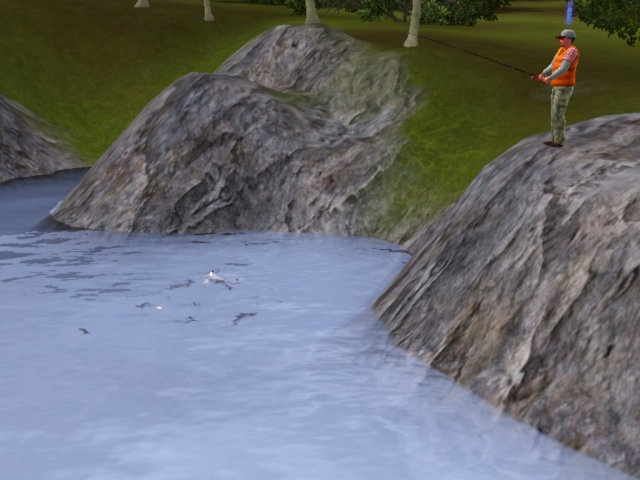 “First off, stand dangerously close to the edge of a bol’dur above a lake full of ravunus’ sharks and paranuhs.  Balance back on ur heels, cuz wen you git that bite from that fidy’ pounder, yew gonna wanna be able to lean back as far as you can wen you yank that sum’bitch out.”

“The very second yew get a bite, the VERY SECOND, yank on the pole with grace and posture, cuz it doesn’t matter how far away the hook and the fish is, it’ll come straight outta the water!  Furget the little red wheelie thing on ur rod.  Yew think that does anythin’?  PFFT.”

“And behold!  The glory of the paranuh!  WOOOOEEEEEE!  Lookit’ her.  I’mma call my wife right now and tell her how I wanna git this cooked!  I’m gonna fry this inna beer batter and have sum fancy fish sticks tonight!” 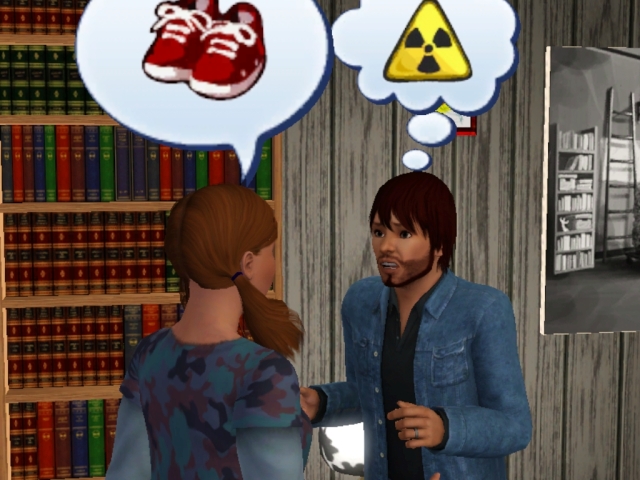 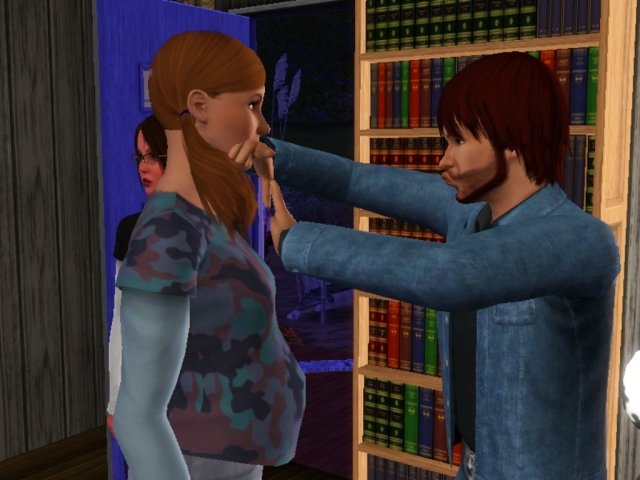 “Wen you are done being pregnant, remember, I gotta paint a portrait of you.” 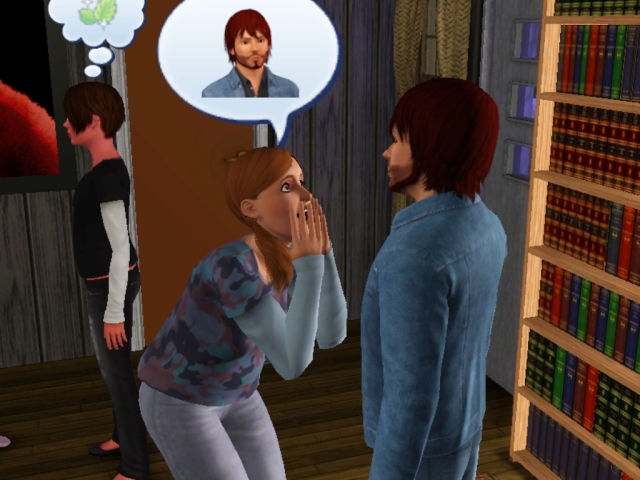 “Ohmahgaw, REALLY?!  I’m gettin’ mah portrait painted by THE Jar’d Seckie?!  The lead guitarist of the local band, Bobby Dee And The Road Killers, who I just now realized lives in the same hawse with me, is gonna paint my picture?!”

“Actually, it’s just the Road Killers now, since Bobby Dee got mauled by that deer on the innerstate.”

That would be Reina, Chase’s daughter and the only friend you have, Berkliegh.

I have no idea how you could have come from that conclusion just by looking at her hair, but I can see why she’s your only friend now.

“OH CHRIST BIGFOOT IS IN THE HAWSE!  SOMEBODY STOP IT!!”

“It’s so nice to follow Jed this fur out in the woods while he goes fishing while this late in my pregnancy!  I feel like we kinda spendin’ some time together like we use’ta when we first got married!” 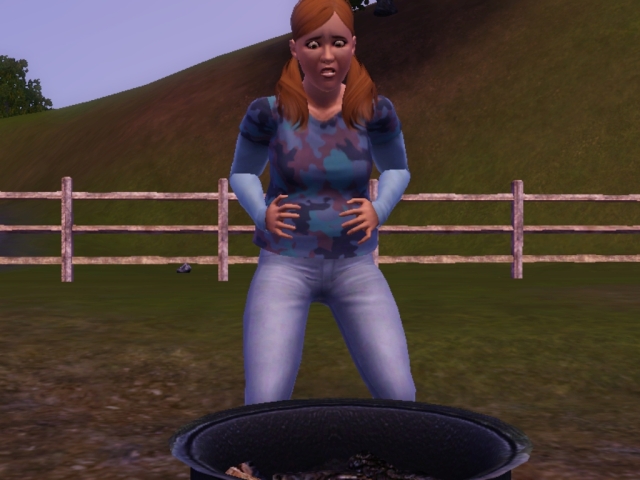 “Oh gawd, it’s comin’ really fast!  JED!  Where the hell are ya, Jed?!  Ok, ok, it looks like I’m gonna have to use this fire pit as a baby bed!  Now I feel like the virgin Mary without all the virginity and the livestock!”

“OH GAWD WOMAN!  I knew I shoulda told you to stay back in the kitchen!”

“AIM FOR THE TACKLE BOX!” 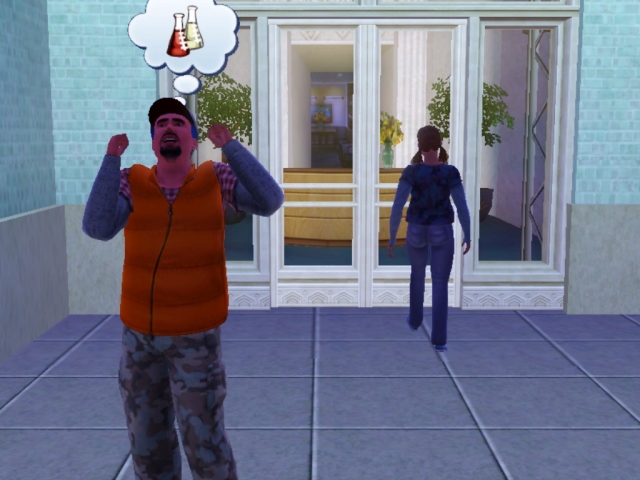 “Yay!  We at the hospital!  They gonna use DRUGS!”

“Just git your ass in here with me, Jed.” 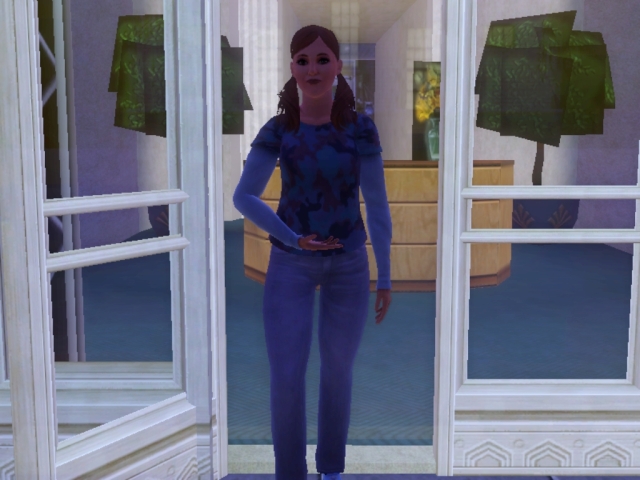 Um, Melissa, is there something you might be forgetting?

“Oh no, Grammpa Sinbad.  The new baby is here.”

“Yeah, I see that, Berkliegh.  Guess I better get over there-”

“NO, YOU STAY AWAY FROM MY BABY, SINBAD”

Anyway, time to introduce the first baby of the fourth generation!

Dodge is eccentric, like his mother, and a slob.  I can already see this, he’s the mechanic with his garage in the yard and always smells like snuff and car oil.

He is also the first baby in the legacy to be born without the reddish skin color!  Interesting!

After arriving, Melissa promptly turned around and took off down the street with the baby.  Um, Melissa, what the hell are you doing now?

But, we were already home.

I swear, if you end up taking the baby back to your brother’s house, I will drown you. 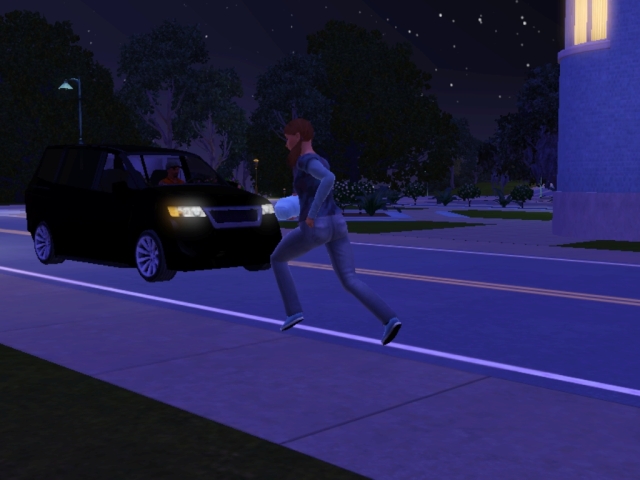 Turns out, after getting out of the hospital, she took a taxi home, but Jed got in the van, and waited in the middle of the street… until Melissa got out of her taxi, walked into the house, and ran all the way back to the hospital. 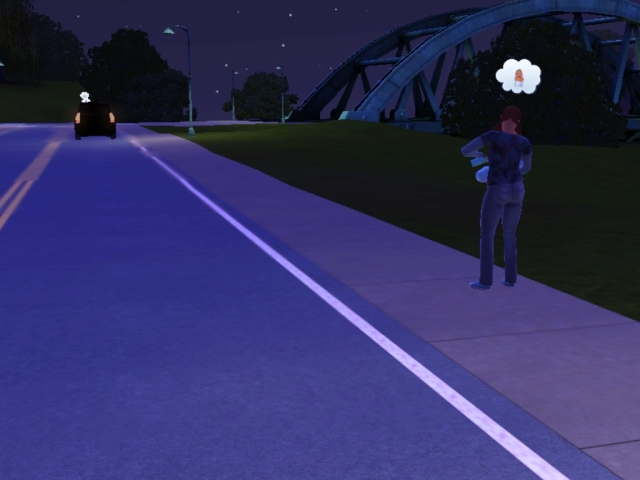 After a confused, awkward stare between the married couple, Jed took off back to the house, leaving Melissa and the baby STILL on the sidewalk.

“Like HELL I’m lettin’ that screamin’ baby in my van!”

Was I expecting anything different, no. 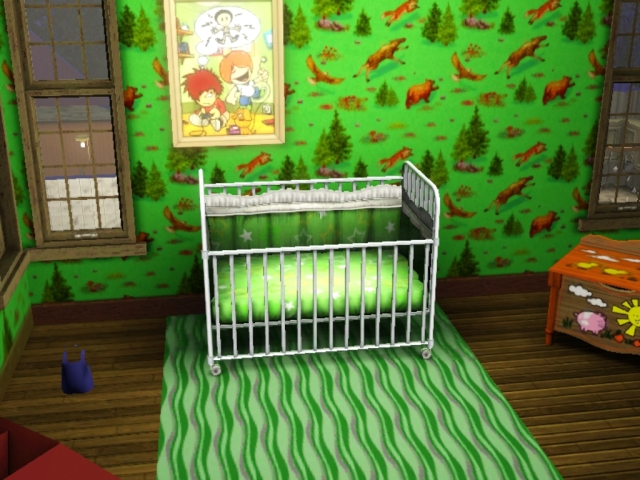 After the slight scare, I gave building a nursery a shot.  Two generations and six or so babies sleeping in the kitchen?  Yeah, it got annoying every time everyone sat down to eat.

Babies like to look at bears and eagles and foxes chasing and probably later killing moose while they sleep, right?  I think so.

Also, about 40% of the stuff here Sinbad stole while I wasn’t watching him.  He’s so caring.

Also note the remains of the teddy bear that has been in the legacy since Luanne was a little girl.

If you see a naked teddy bear streaking in the background anywhere, inform me.  Because I sure as hell didn’t see it.

“Ugh, I thought dad killed you” 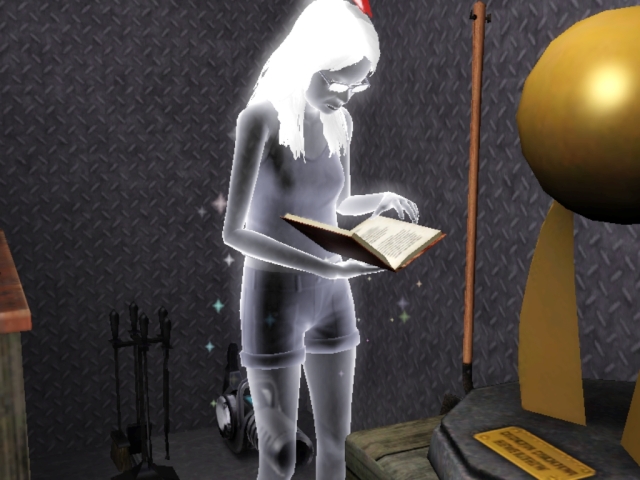 On the same night, Amy also appeared for the first time, but she apparently wanted to keep it quiet, because she stood in the garage all night with a book she magically whipped out of her ass that never existed before.

You have no idea how much I miss Amy half the time. 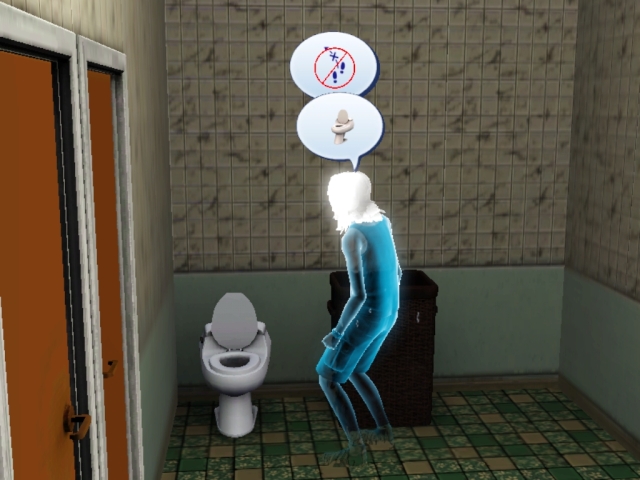 Oh god, and he would do this when he was alive

Oh god, what are you doing now Sinbad?

“Now you’re in Berkliegh’s room, where no one can hear you scream!  Suffer as I take something away from you that you shouldn’t have had in the first place!  Suffer for my benefit!  HAHAH!” 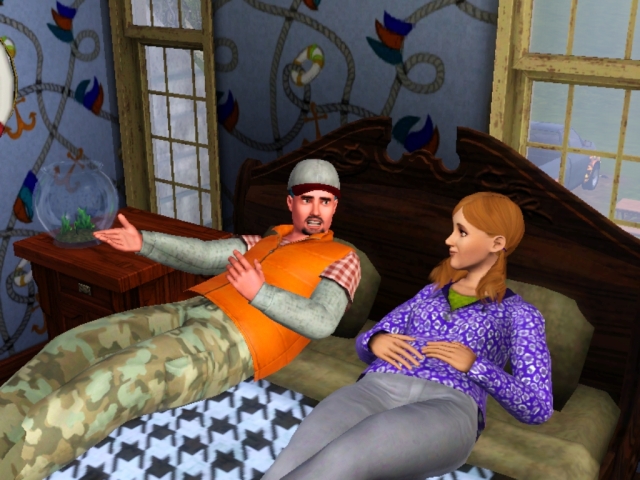 “Um, Melissa?  I was walkin’ by Berkliegh’s room on the way to the bathroom and saw Sinbad taking candy from Dodge.  Yew wouldn’t know anything about that, would’ya?”

“Did yew give candy to the baby?!  Yew don’t do that, Melissa!  Yew do know that Sinbad did a gud thing, and he’s gonna be pissed off when he figgurs this out!” 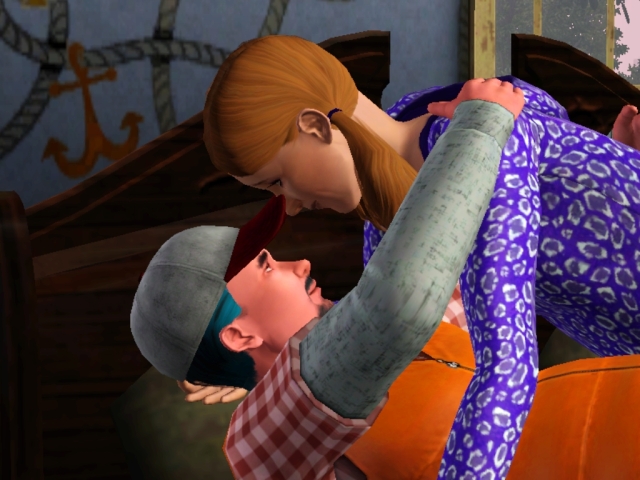 “Sometimes I worry ’bout what goes on in that head of ur’s, babe.” 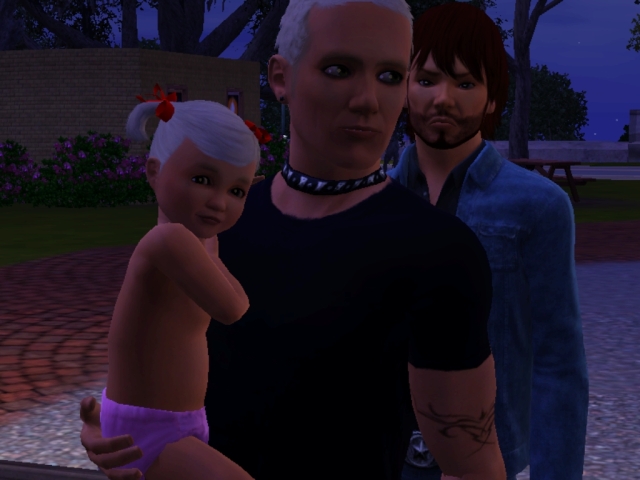 AHH!  Look at what I found while making Jared bum money off people with his guitar!

Her name is Amber, and I never even knew she was born!  Then later, when I was looking for her in the family line, and she wasn’t even showing up, dispite Ellie Mae being her mother.

After digging around in the Edit Town, I found that I didn’t have to manually move them into a house when I kicked them out.  Apparently, I moved in a clone of the couple.  The real couple magically live in Goodwin’s old house (while Goodwin still lives under the laundry line at home)

“I HATE LIVING IN THIS HOUSE, WHY AREN’T I DEAD YET”

“Shut the hell up, Sinbad.  I’m tryina’ watch my soaps in heer.”

“Take this, Jed, dispite our past friendship!  This is what you get for having a stupid wife and smelling like fish and still having unnatural blue tips in your hair!”

“Hmm, I guess I shouldn’t let him hit on my husband like that.  I guess since he’s his step-grammpa or wutever, but still…” 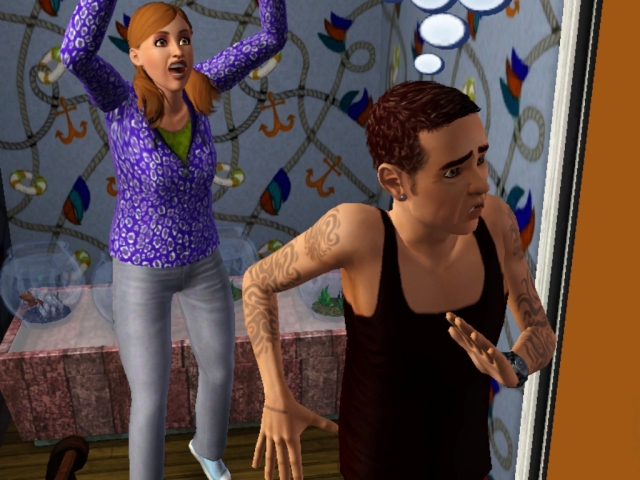 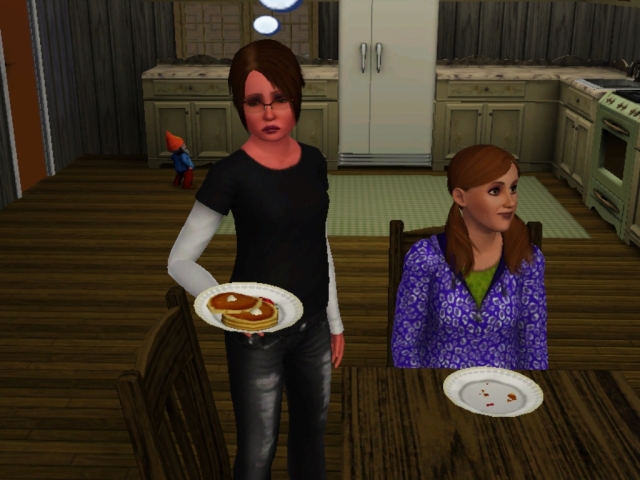 There aren’t a lot of pictures of Berkliegh.  Have I told you before about how boring she is and how she never really does anything besides freak out at ghosts, pass out, and frown at absolutely EVERYTHING like she is now?  Yeah.

“Sigh.  This house sucks.  These pancakes suck.  Everythin’ reminds me how crappy my life is cuz wen it comes right down to it, all that’s ever gonna happen is we’ll all get eaten by bigfoot and become poo in the swamp.”

“Oh, lighten up little Brooklyn’er whatever.  You gotta be happy like MEEE!  Life is fun, everythin’ is fun!” 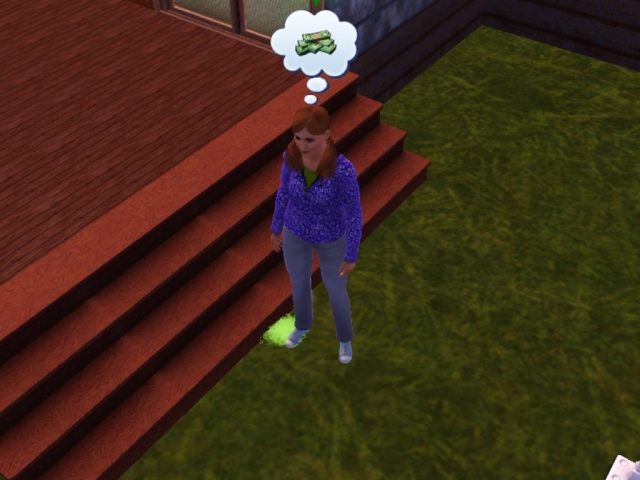 “That puke was fun!  It was also really green!  Like money!  Money is fun!”

I really need what you have been smoking, Melissa. 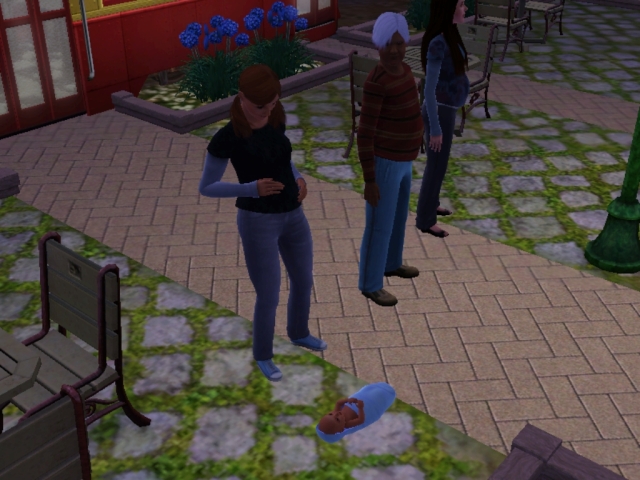 “Um, should my sister really be puttin’ that baby down on th’ cold concrete like that?!”

I don’t know, Dominick.  And I really don’t think that’s my prime concern at the moment all of a sudden.  For you see, as soon as the camera panned over to Melissa to show that she was expecting (and also carrying around Dodge without my knowledge somewhere out of the house again) I saw something that completely shocked me.  Not only that, it horrified me.

IS MY SIMSELF DOING PREGNANT?!

I make sims legacies and update them once every other blood moon :)
View all posts by missmiserie →
This entry was posted in Generation 3. Bookmark the permalink.

13 Responses to Not Just Some Legacy Babies