Sigh.  My computer can barely take Ambitions as it is though.  I guess I’ll just have to live without it for now.  Besides, big city themed settings and stuff probably won’t mix well with the rural redneck theme of the southern prettacy.

Ta-da!  She gained Party Animal as her trait.  Because that’s a great trait to have in a seven year old, I tell you what.

I was starting to see a lot of her father in her, and was getting excited for her.  Then Amy styled her.

The Beaver is back.  And back with a vengeance at that.  Is it just me, or is there just one big tooth in the center of her mouth?

“Speakin’ of mah poor genetics, where’s my papa?  Why didn’t he come to mah birfday party?”

“Sigh.  It’s so borin’ for Shark to drink alone at the bar today.  Shark wunders where everyone’s at today.”

I don’t know, but isn’t there somewhere YOU need to be, Shark?

YOUR CHILD’S BIRTHDAY, YOU LOSER.

Sinbad got a makeover and his wife Amy gave him some Clairol, which he apparently rubbed all in his eyebrows.  Sadly, as Sinbad got older, his eyebrows exploded, now he has two giant red caterpillars above his eyes instead.

But instead of actually fixing that, his wife decided that Sinbad instead deserved a nice little over-the-hill birthday present:

The Beast, whatever the game wants to call it to avoid copyrights.  I guess I modeled the paint job after one of my dad’s choppers before that semi smashed into it.

The flames on the back wheel are a little out of place though in my opinion though.

“Bout time I got a little something something for putting up with all the shit I’ve been put through.  Don’t know what took so long though.”

Don’t be an ungrateful ass, Sinbad. 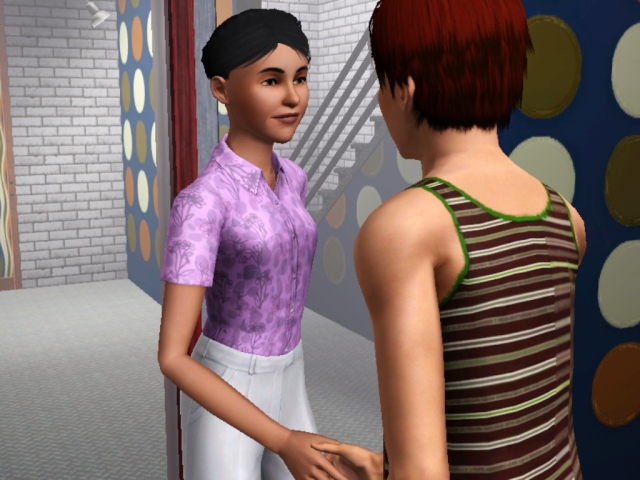 “So hey baby.  Nice that ya invited me back to ur basement again.  I don’t remember ever meetin’ you before though.”

“To be honest, this is the first time I invited you into my house.  I have no idea how you got in last time.”

Jared, Sinbad’s only living son,  seems to be doing just fine when I’m not paying him any attention.  Her name is Tamara or something like that.  She’s actually really cute too.

“So, gotta boyfriend yet baby?”

“Well no, there aren’t any teen guys in town right now so-”

“Sweet, all the chicks belong to me then… 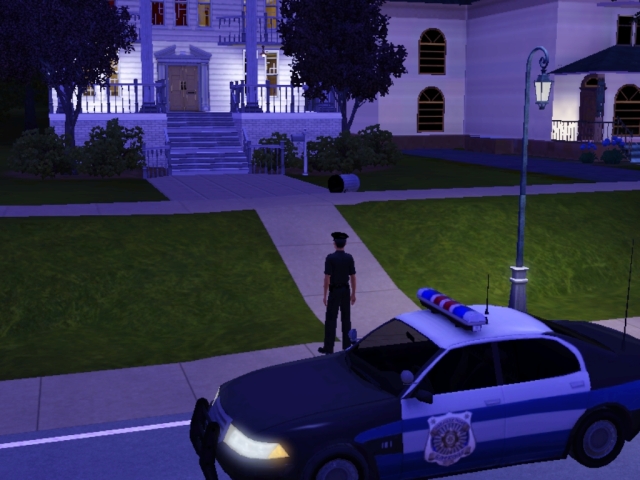 “JARED ROTTER SECKSIE, PLEASE COME OUT WITH YOUR HANDS UP AND OUT OF THAT BRA”

Look out, it’s the Communist Curfew Cops!  Come to reinforce a stricter iron grip on society than Red China on a church.

“Meh, you just called the cops on me cuz I was gettin’ to second base with your daughter, that’s it!”

“Keh heh heh heh, no bra will be safe from me before it’s all over with!  Bwahahaha!  I’m gonna’ go and grab them all like THIS”

While Jared tries to figure out what he’s supposed to do with a woman, let’s move on to something nice. 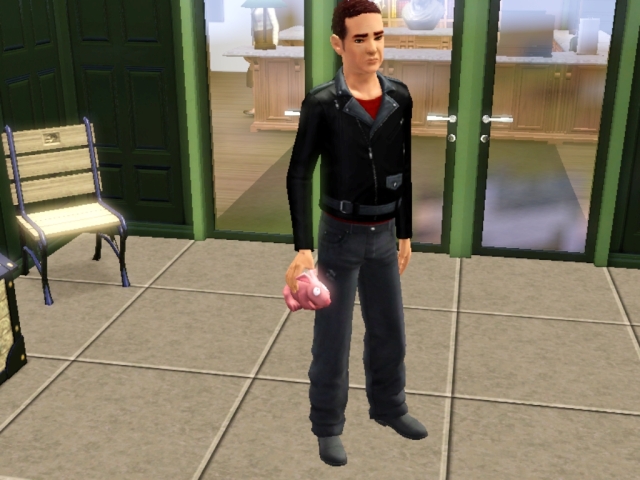 “Hey, I’m looking for something for my wife’s grandson for his coming birthday or something.  I was thinking about that red fire truck you have in the corner over there.  How much for that?”

“I’m sorreh sir, but that right thur’ is an antique, and just fur display only.  It’s not for sale.”

“WHHAAAAAAAT?!  WHAT KIND OF PAWN SHOP CONSIGNMENT STORE IS THIS?!  I DEMAND THAT RED FIRE TRUCK OR I’M FUCKING BURNING THIS PLACE TO THE GROUND BITCH!”

“OHMAHGAW SIR!  Please have MERCY on me!  Please!  I can’t sell the truck but take this heart shaped pink diamond!  Just don’t hurt me please!  Sob!”

“Peh, fine.  I GUESS I can part with this instead.”

Wow, that was easier to get than I thought.  Maybe I should get back to trying to get someone to make a friggin’ simbot or something.

“Sir?  You can’t fall asleep on the… I mean, that’s fur display onl- oh fuck it, at least he’s not makin’ noise and breakin’ stuff.” 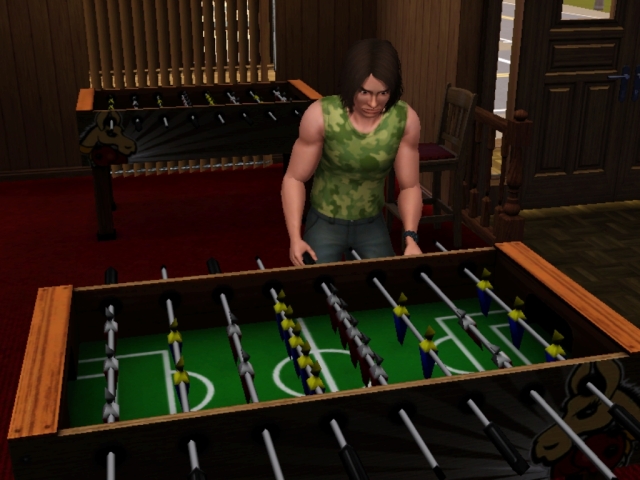 “And it’s the South Curalina Gamecocks and Notur’ Dame in the battle of the century!  Quarterback Shark goes in on the 24th field line, and… and YES… he’s going… GOING… GOAL!  AND THA’ CROWD GOES WILD!  THEY CHEER SHARK!  SHARK!  And that people, is a GAME!

“The bar is lonely today as well D:”

“Glad to see you could finally visit us Grandma Amy!  Come in make yourself at hom-”

“I WANT TO FLICK YOUR NOSE.”

Amy spent the night then.  Nothing like reconnecting with her son’s family and her grandchildren.”

“Can ya believe it Amy?  We were best friends in high school, and now our own children are together and now we are actually family!  Who would have known my precious daughter and your nice son would be compatible with each other one day!”

“Tell me about it.  I didn’t think they’d be together either, but after the noises I heard last night coming from their bedroom, I guess I was wrong.” 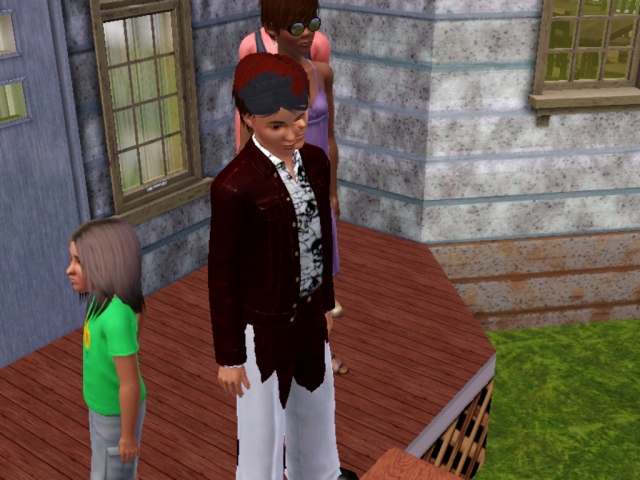 Speaking of ‘getting with some chicks’, Jared seems to be taking ‘getting into them’ a little seriously.

“When this supposed to feel good, Tamara?  I just feel this really bad pain everywhere.”

“Um, Florence?  I know I’m ur’isistable and all, but you are my brother’s wife, and I don’t think you should be trying to fondle me and be getting up all in my business like this.” 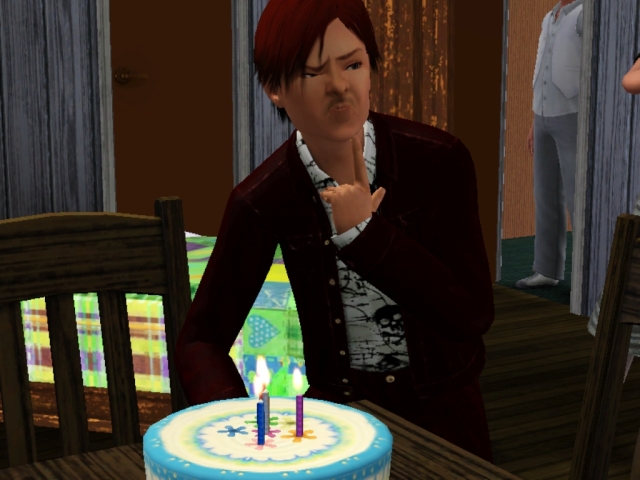 Oh well, time for birthday.  Jared’s growing up, so he get’s a little birthday party.

“What should I wish for…”

Wish for a really good final trait.  With your grades, I wouldn’t want you ending up with another trait like Loser or something.

“I’m sorry son!  They’re gonna do th-WHAT THE FUCK what’s that bed doing in the kitchen?!”

Jared is a Sinbad clone D:

However, Jared’s lifetime wish is to get to the top of the music career, so I tried to give him some sort of country star look.

Not bad if I do say so myself!

He gained Vegetarian as his final trait.  A real disappointment for his parents, but that’s what happens when you fail school.  You lose interest in meat.

“Dammit Jared, just because you are older now doesn’t mean you should start ignoring me like this!  What is wrong with you all of a sudden?!”

“I don’t know Tamara, maybe it has something to do with you turning into a slut all of a sudden and letting just about anyone you meet just enter you like that, you ho.”

“It’s also mah birthday too!  Do I get fancy cake and big flashy party too?”

Well, not really Luanne.  You are just growing up into an adult, which means you are going to be exactly the sa-

OKAKHFEJD WHY can’t this girl keep her friggin’ hairdo?!

WHO THE FUCK TOOK MY HARLEY BEAST”

“Hmmmm, how exactly does Shark ride this thing?”

So while Sinbad calls a taxi:

“Heheheheheh, I’m puttin’ this gum in all of her lawn’dry!  Then when she get’s it back, the bitch won’t be stylin’ and profilin’ anymore!  HAHAHAHAHA!”

“WHERE THE HELL IS THAT BASTARD?!”

“Chill man.  Shark didn’t do anything wrong, Shark just took the bike out for a couple drinks, what you got stuck up your ass?”

“Touch my bike again, and I’ll shove that whole foosball table up your ass, you hear me!?” 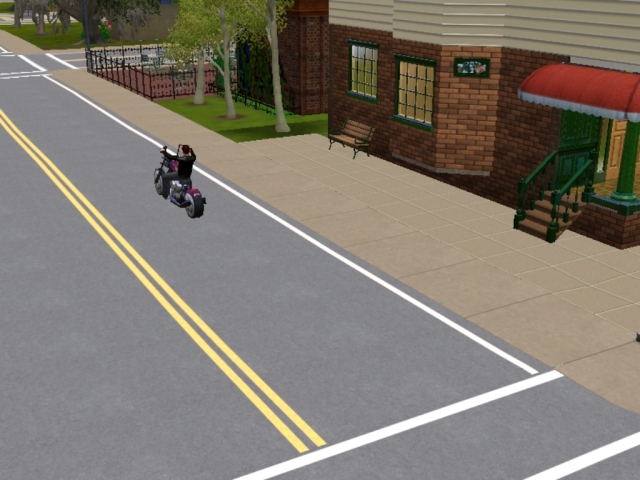 “You know what I just realized ’bout ya, Grammy Lucy?”

“Ur always wearin’ that, and I just now noticed it’s a bathin’ suit!”

Holy crap it is D: 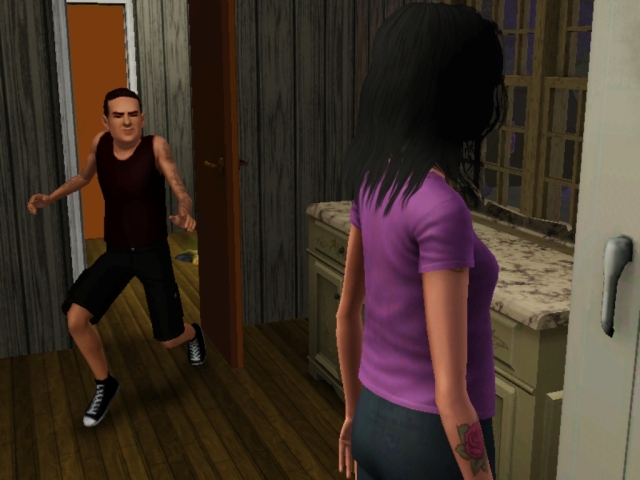 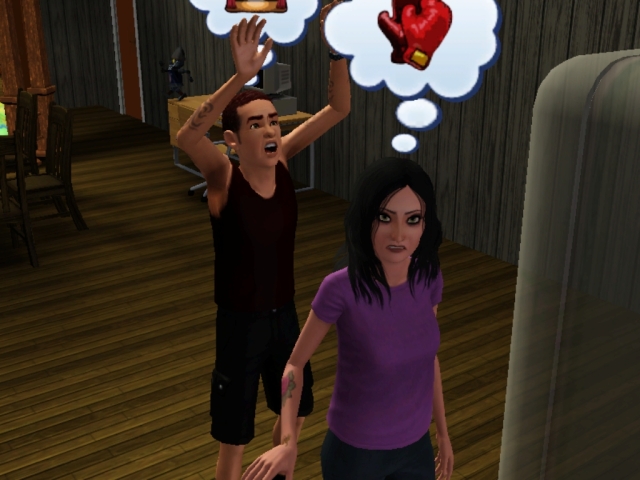 “Ya know what?  I really feel like knocking the crap out of someone…”

“Damn, Lucy!  What the hell is wrong with you!?  I was just playing a prank on you!”

Thought I’d mention Leroy right quick.  After I caught him setting fire to the stove that time, he’s actually been really well behaved since then.  He’s pretty much let himself outside most of the time, and he’s been really quiet for a while.

But yeah, he’s still around. 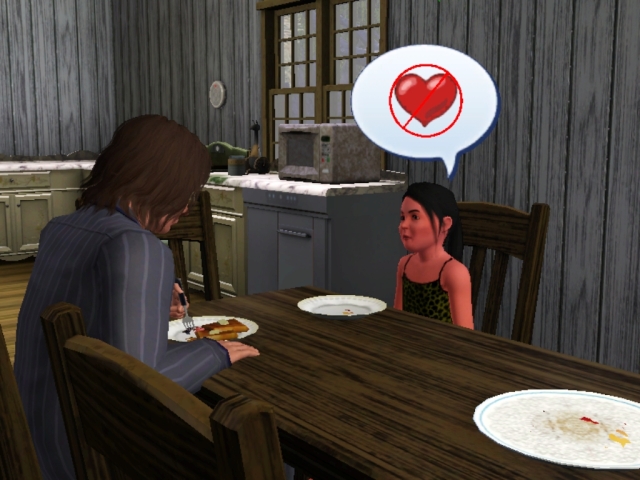 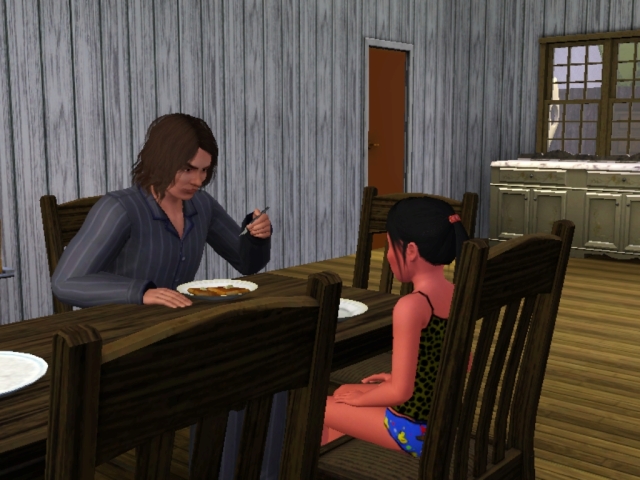 “You know what’s really nice?  That pond in the backyard.  Shark has never been able to fully appreciate it until right now.”

“It is a nice pond dear.  If yew get on the treadmill on tha porch, you can view it while exercisin’ and it’s really nice.”

“I really hate my family.”

Then finally, that night, Lucy dressed up in the wrong outfit for the final time.

“What’s going on here?  Am I dreaming or something?”

Hmm, I seriously doubt that, Lucy.  You are probably going to spend the rest of eternity haunting the yard and the ground under the foundation with Leroy.

“What’s goin’ on in here?  Grammy Lucy?  Why does everythin’ in here smell like burnt ass?”

“UGH!  What the hell!?  Is that the SAME brat that was here the last time I came for the burnt one?!”

“So Lucy Ferne.  You ready to pay your dues and cross to the other side?”

“I think I’m ready.  After taking care of the children of my enemy and cleaning a filthy house for the punishment of the death of Lee, I feel it’s time for me to finally find my resting place.”

And with that, Lucy died.  She is the first elder to pass in my legacy, and she isn’t even part of the bloodline!  Go figure.

Now that she’s gone, who’s going to take care of Jed and wash the clothes?  I fear that without her, the house is going to go to hell in a heartbeat.

So until next time, here’s a picture of Leroy possessing a spoiled turkey.

From the table that was at Luanne and Shark’s wedding that NO ONE can clean off for some reason and I can’t delete until the food is gone.  It’s not fair.

I make sims legacies and update them once every other blood moon :)
View all posts by missmiserie →
This entry was posted in Generation 2. Bookmark the permalink.