Welcome back to the Southern Prettacy, where we focus on the american south, and try to turn a redneck from hell into a southern belle in ten generations.  I’m already enjoying it so far because I had to start over three times because my computer kept crashing!  I wasted 12 hours!  What fucking fun!

In the last chapter, I introduced to you Leroy, our little southern bachelor.  I chose Twinbrook, and after reading the official rules to sims 3 legacy living, I realized I needed a lot that cost circa $14k.  Being new to this pretty much, I realized that I don’t HAVE a lot in Twinbrook that cost $14k!  Nor do I know how to put one in the town being the shitty n00b that I am to sims 3.

He still has enough money for a small house, but I liked to have some lawn living for a day or two, just for that old legacy feel.  So I gave him the basics and let Leroy have at it.  The first thing he does: 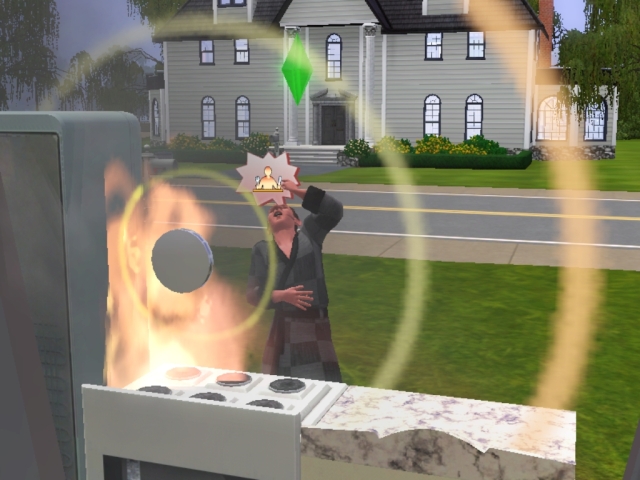 He burns his waffles.  Nice Leroy.  Way to nearly end the legacy before I even start it. 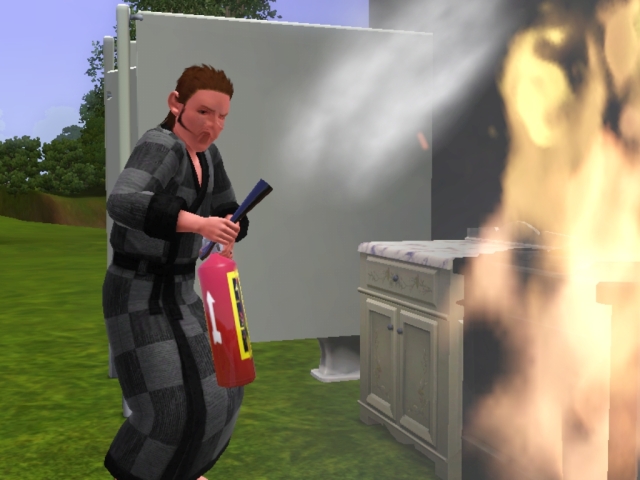 “DANG FLABBIT!  I done blasted this extingisher in my EYE!”

Well, the fire is on the STOVE, not in your face, you dumbass.  Am I just going to have to make another legacy founder and do this again from scratch?! 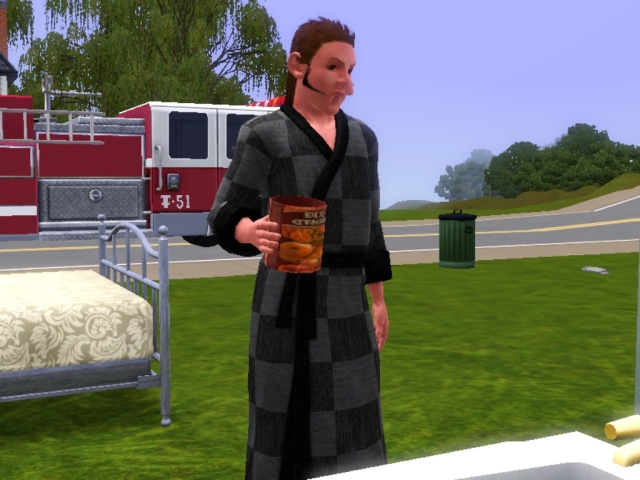 Leroy put the fire out after all, because he’s a big boy.  The fire department, on the other hand, really disappointed me.  The fire alarm went off forever ago, and the department seriously took it’s time getting to this lot.  What, was there traffic?  Just because there is a department now doesn’t excuse them for being slow. 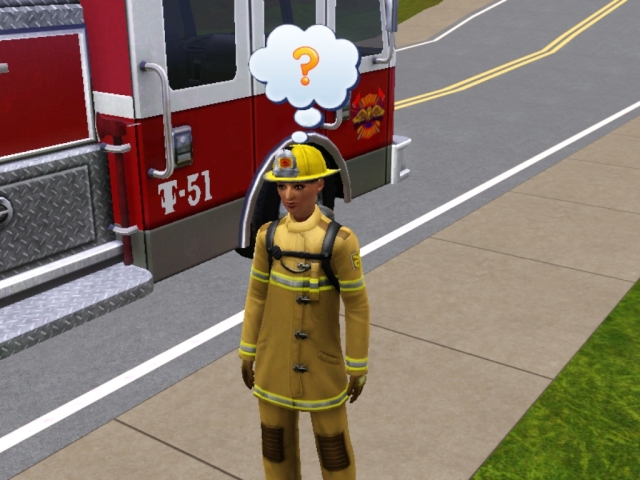 “Durr.  Wut am I doin’ here?  Was I just drivin’ round town again, showin’ off the truck?”

One thing I miss from the sims 2.  The fire fighters from that game could be as dumb as shit, but at least they were quicker to respond than this broad. 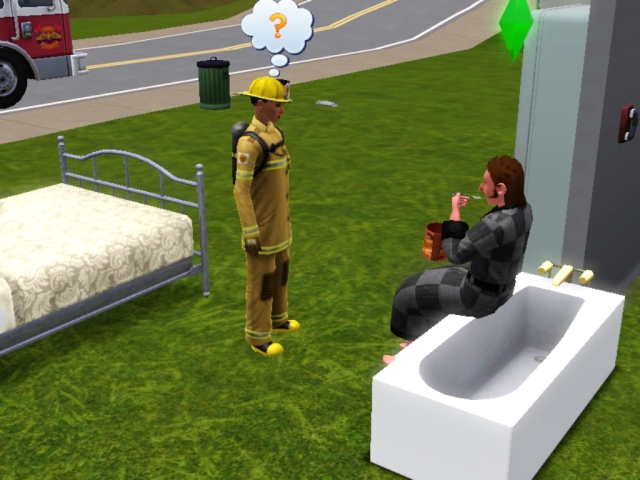 “I see that your stove is smoking and burnt into a pile of molten plastic, but there isn’t a fire now.  I’m fining you $500 for making me get off my ass and drive to your house just because ‘your life was in danger’ or whatever.”

Bitch.  Who let a broad like you join the firefighting force?!  Did they hire you just because you are hot or something?!

“Prolly.  I was Miss South Carolina, you know.” 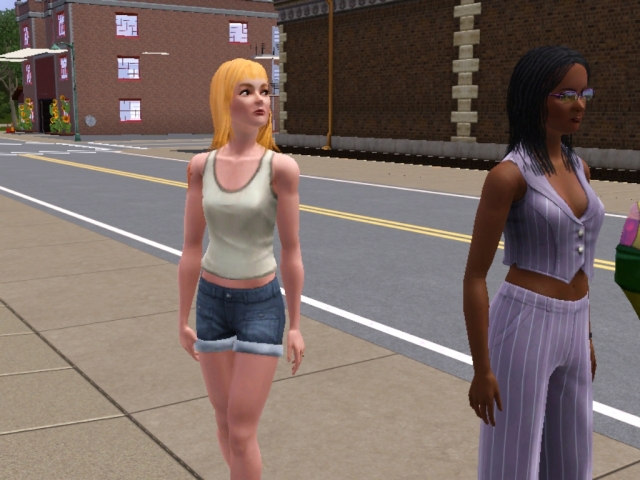 After that crap, I sent Leroy out to find his perfect woman while I looked over the town for a job for him.  Dispite seeing a lot of ugly sims around town, we go to town today and find nothing but babes.  I thought it would be harder than this… 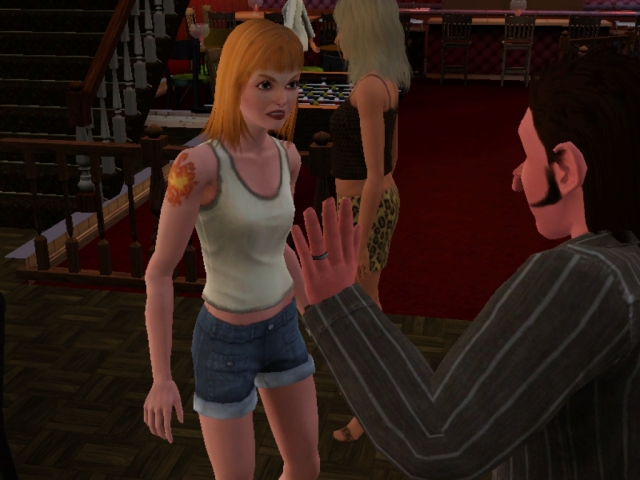 “Hey babe.  How ’bout me, you, a six pack on the football field ta’night?”

“Ew, NO!  You’re hideous!  I’d rather date the elephantman!”

The red haired bitch is a bitch.  I don’t need her birthing out Leroy babies anyway. 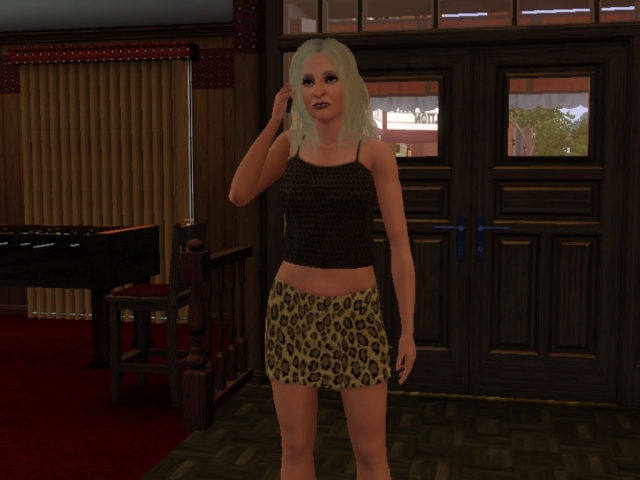 Hey look!  Twinbrook has hookers!  If all else fails, Leroy can hire her and lock her in the house to birth his love children.

“Look Pimp Daddy, I’ll have the money by tonight.  Now if you don’t mind, this redneck guy is following me around the bar.  I got to see if I can lose him before I go back to the corner.” 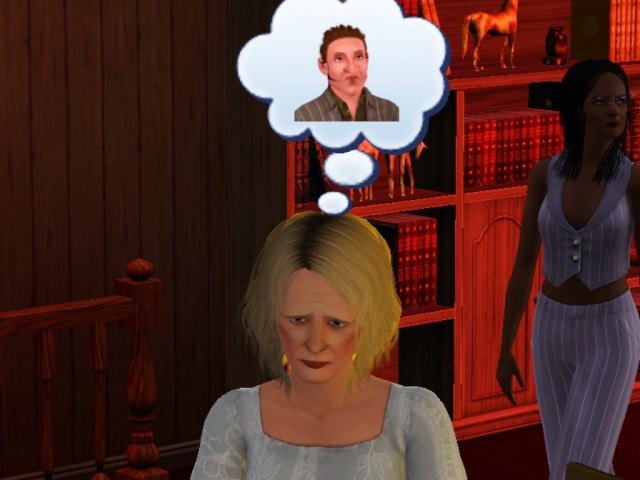 “Aw that poor man.  He’ll never find love at the rate he’s going around these women.  Too bad I look like a redneck Joan Rivers because I would take him like a stallion.”

Oh shut up mom.  If this was an Uglacy, of course the bride would be the sexually repressed divorcee raising her daughter’s bastard child.  It would be a Cinderella story for her.

But this isn’t it. 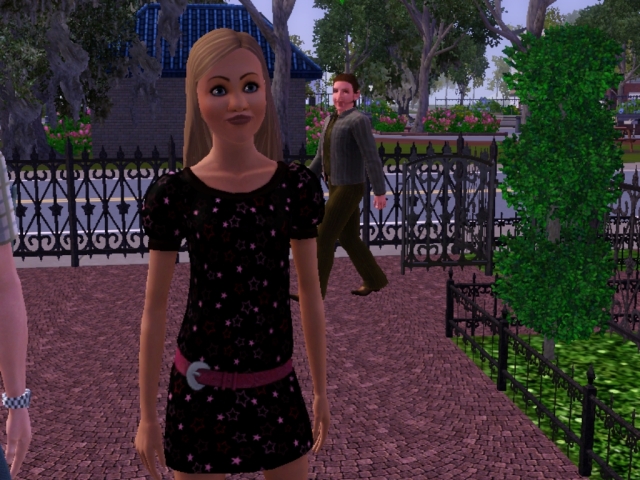 “Now thur’s my woman.  She looks just like our high school beauty queen, before she ran off with the history teacher.”

No, Leroy.  She’s still a teen, and I’m going to avoid that nasty little stereotype at all costs.  Let’s stay legal, ok? 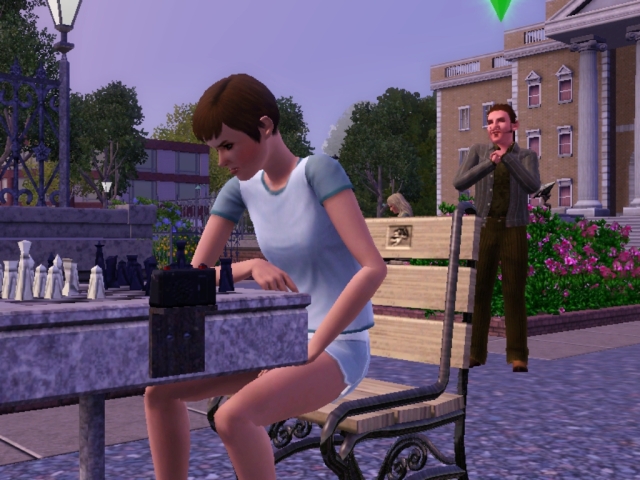 “She’s so lovely!  I could just sit on the creek and watch the stars with her forever.”

“Back off, freak.  If he comes any closer to me, I’ll tear that flap of a nose clear off his head.”

Julianne is so far the cutest girl I’ve found so far.  But she didn’t want to be nice with Leroy here, so let’s see what I can come up with before I finally decide. 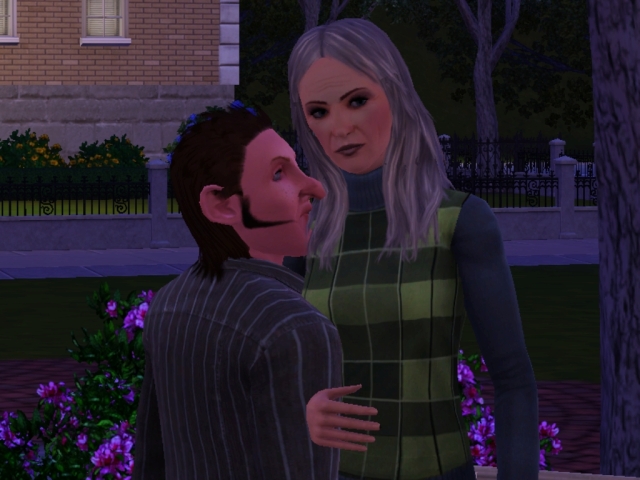 “Wow, she’s a tall lady.  And her hair smells just like Jack Daniels and dandelions.” 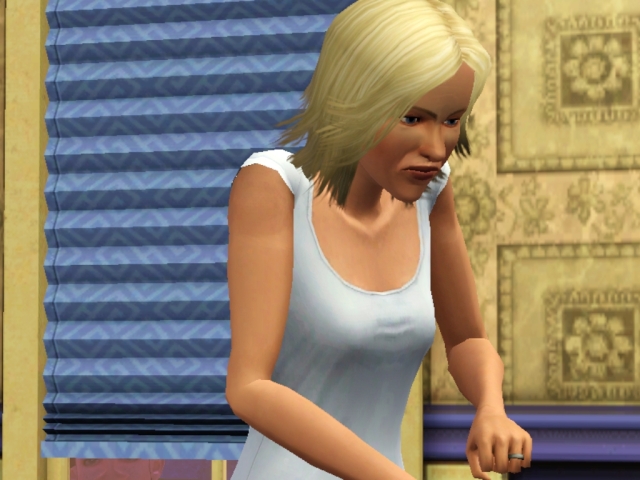 “Ugh.  I have this icky feeling I’m being watched by a creepy trailer man.” 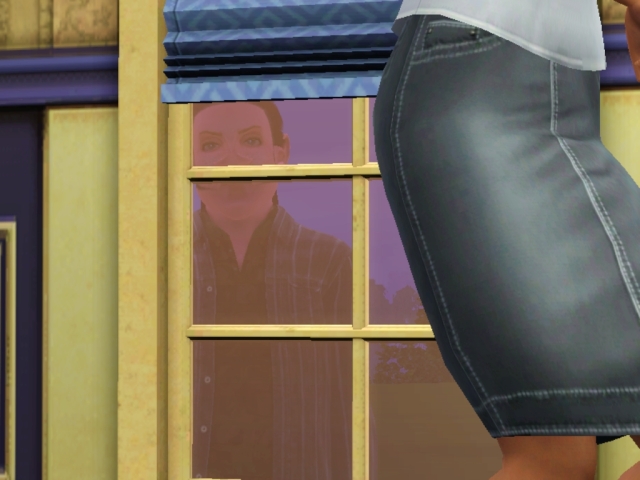 “Mmm, she has a fine tail.  I wonder how her marriage is holding up…”

So what, we resorting to peeping, Leroy?!  One thing I love about the sims 3.  If you can’t find sims at community lots, you go to where the sims are… even if they don’t answer the door.

Look in window.  My new favorite command ever, even if it’s as creepy as hell. 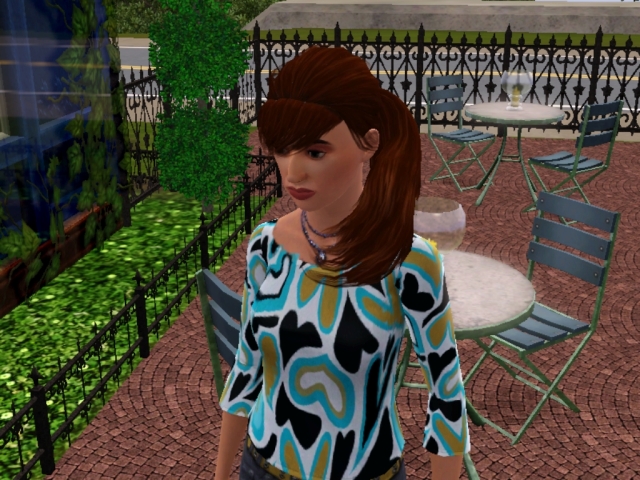 It looks like a really cheap monkey mask and she put the lipstick on while still drunk from the night before.  Try again. 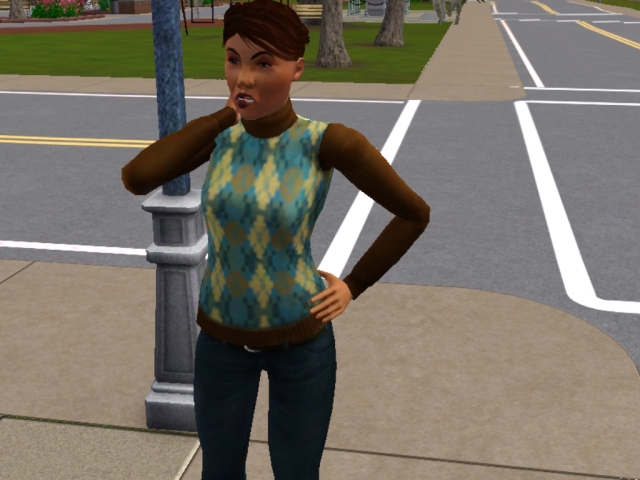 This one doesn’t look like mother material.  More like a step mother who sends all the kids to a southern private school until they are 18, or force them to live in the closet back room and clean the house for her own children from her past marriage to the drunk lawyer. 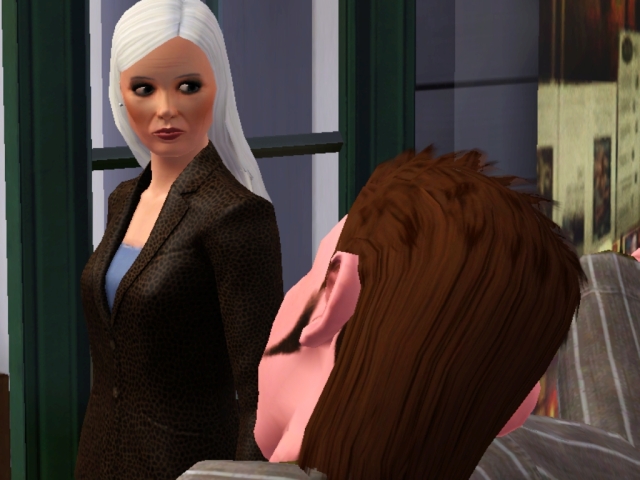 She’s also sterile.  Stop looking at older women Leroy, they are virtually worthless.  If Silver was 60 years younger, but no.

(UPDATE FROM THE FUTURE:  Turns out she’s not old, she’s still an adult, she’s just too cheap for a facelift.)

It was starting to look like Julianne was going to be the woman for Leroy.  Then this jewel wondered out of the bookstore: 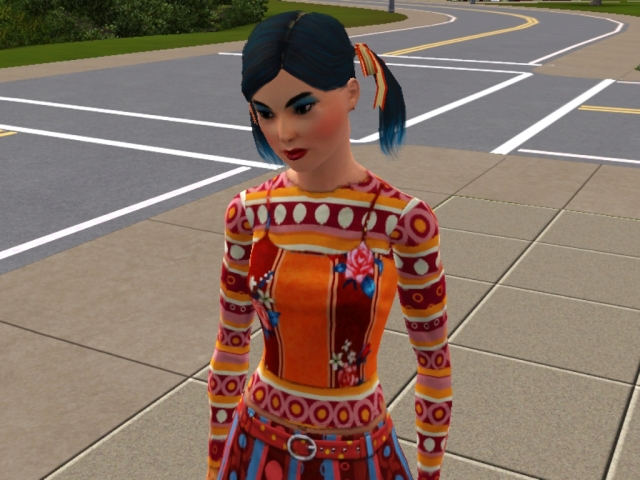 Meet Amy Bull.  She about blinded me with her gaudy attempt at fashion, but any woman that walks out of their house wearing that shade of eye shadow two inches thick just shouts trailer park princess. 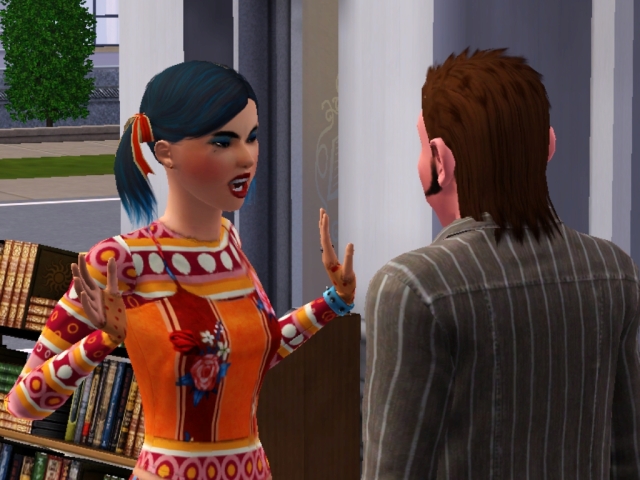 I think we found the woman we need. 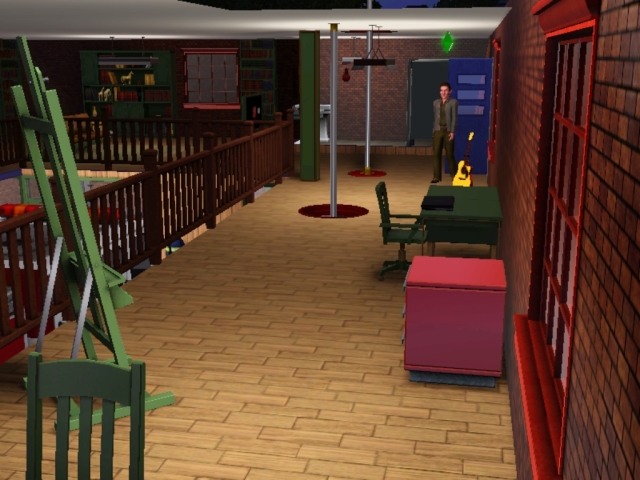 “Hello?  Anyone here?  Why aren’t there any people in the fire department?  I was going to talk to the hot firefighting chick!”

Good question exactly, Leroy!  I think THIS is why Leroy about died the other day…

I make sims legacies and update them once every other blood moon :)
View all posts by missmiserie →
This entry was posted in Generation 1. Bookmark the permalink.

12 Responses to Findin’ a Gud Woman